When a pandemic kills your story about a Vancouver heroin clinic

Crosstown Clinic is one of two facilities in B.C. to offer prescription heroin to clients. Will the model ever be expanded?

Mike Howell
Apr 17, 2020 3:44 PM
I had been working on what I thought to be an interesting story and planned to post it this week to coincide with the fourth-year anniversary of B.C.’s other declared public health emergency: the overdose death crisis.

But the pandemic killed it.

The story was about a heroin user, a doctor and Judy Darcy, the Minister of Mental Health and Addictions.

David Napio takes the syringe from a nurse, turns his back to a mirror and finds a spot just above his buttocks to inject himself.

He plunges in the syringe.

Three hundred milligrams of diacetylmorphine is now coursing through his veins.

A warmth soon comes over him.

“Earlier, I had a chill like when you get the flu and your bones ache and your nose is running,” said Napio, a 59-year-old longtime heroin user, in describing the sensation. 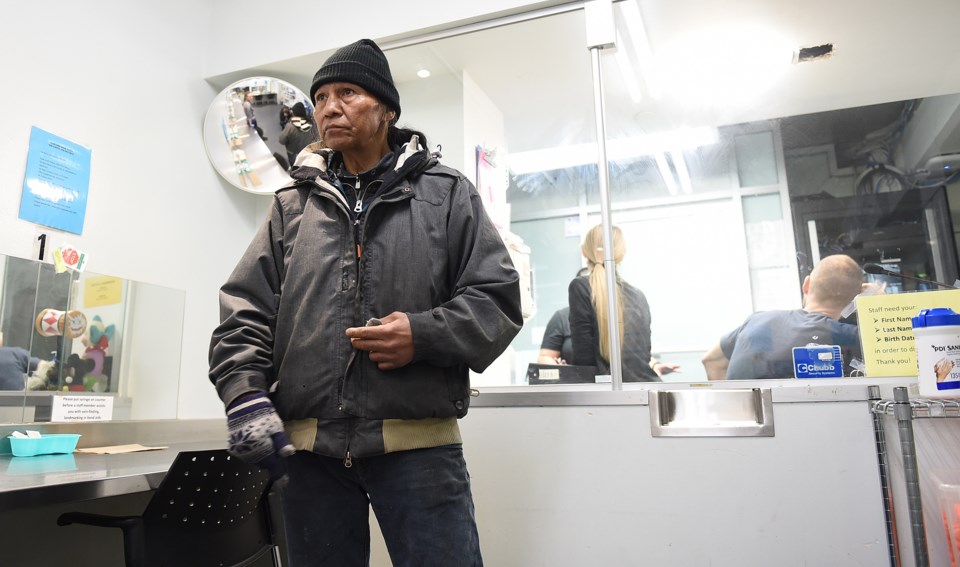 David Napio in an injection room at the Crosstown Clinic. Photo Dan Toulgoet

Napio injected himself at the Crosstown Clinic in the Downtown Eastside, one of two clinics in B.C (the other is in Surrey) that allows drug users to inject diacetylmorphine, which is more commonly known as prescription heroin.

It was his first injection of the day, with another to come in the late afternoon and another before 10:30 in the evening. He considers himself fortunate to be among the 130 clients at the clinic, where there is a wait list that has grown to 428 people.

Napio is an advocate for the widespread expansion of prescription heroin programs in Vancouver and across the province. Crosstown has not only improved his health, he said, but kept him out of prison.

He believes he has overdosed 39 times since getting hooked on heroin as a boy.

“Quite honestly, if it wasn’t for this program, I might not be here and be feeding the worms instead,” said Napio, who has a long criminal history that includes convictions for bank robbery and selling drugs.

The story, which went on to include comments from Dr. Scott MacDonald of Crosstown and Judy Darcy, was in draft form in mid-March.

It was to be ready to run this week.

The premise of my story was this: If the Crosstown model appears to be working — as in keeping people alive, improving their health, reducing their need to commit crime and putting them in a space to get jobs — then why isn’t the program more widespread in B.C.?

Then the pandemic hit and my news coverage shifted to anything and everything COVID-19. Which meant I never did finish my story, although I did write a piece a couple of weeks ago about drug use during a pandemic.

That story, frankly, further sunk the probability of my feature running since I’d have to totally re-work it and interview everybody again.

That’s because the B.C. government relaxed rules around people accessing prescription medications such as the painkiller hydromorphone.

Those rules were relaxed because the feds were concerned about drug users unable to physically distance themselves from others and stay home.

Now drug users have options to take home medications, or have a pharmacy deliver them to their door. Those options are in place at least until September.

Prescription heroin, or diacetylmorphine, was not included in the list of medications available. This did not come as a surprise, since making such a drug available outside of a clinic is not a move lawmakers are lining up to make.

But expanding what Crosstown offers at other clinics is a move Mayor Kennedy Stewart supports. So do many health officials and even the Vancouver Police Department.

What about the B.C. government? 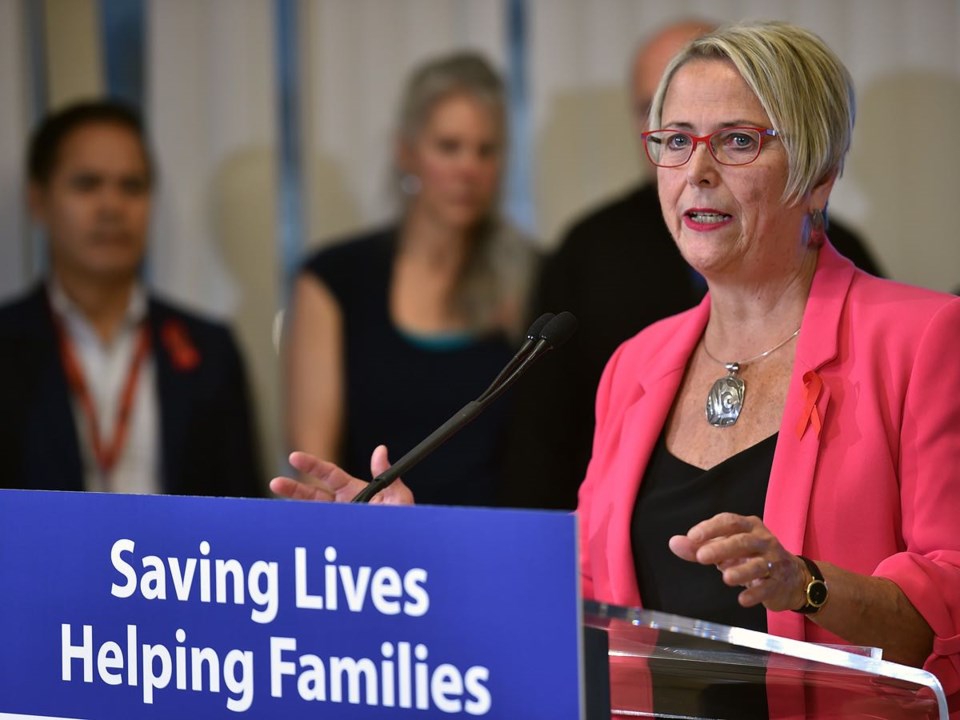 I looked back to the interview I did with Darcy in early March where I asked her about expansion of prescription heroin programs, pointing out that 428 people were on a wait list at Crosstown.

Three times she told me the reason the government wasn’t scaling up the availability of prescription heroin was because it is not manufactured in Canada and has to be imported from Europe.

“It’s something that Health Canada is working on,” she said.

“But there are other medications that do work for different clients, and we’re doing significant expansion in a number of different areas.”

She outlined a series of measures the government has taken to battle the overdose crisis, including opening more overdose prevention sites, treatment programs and pilot projects involving prescription medications.

In fact, the minister said, 3,500 more people in B.C. receive medication-assisted treatment than when the NDP took office in July 2017.

Three forms of methadone, hydromorphone, morphine and Suboxone were among the medications she mentioned.

Still, I wanted to know whether there was more to the government not expanding the Crosstown model than just an issue of supply.

Was it politics? Money? Anticipated blowback from the public?

She appeared frustrated by my line of questioning.

It told her that Dr. MacDonald said Crosstown was capable of preparing syringes of prescription heroin for 800 people and transporting the rigs to clinics across Metro Vancouver, up to the Sunshine Coast and out to the Fraser Valley.

“I’m not a clinician, I’m not in a position to speak about which patients need what medications,” Darcy said.

“I’m very happy to talk to you about what we are doing to expand medication-assisted treatment in Vancouver, in the Fraser Valley, in Surrey, in Victoria and across the province.”

Which she did talk about.

But she also talked about Crosstown — not about expanding the model, but of her visit there on her fourth day as minister. 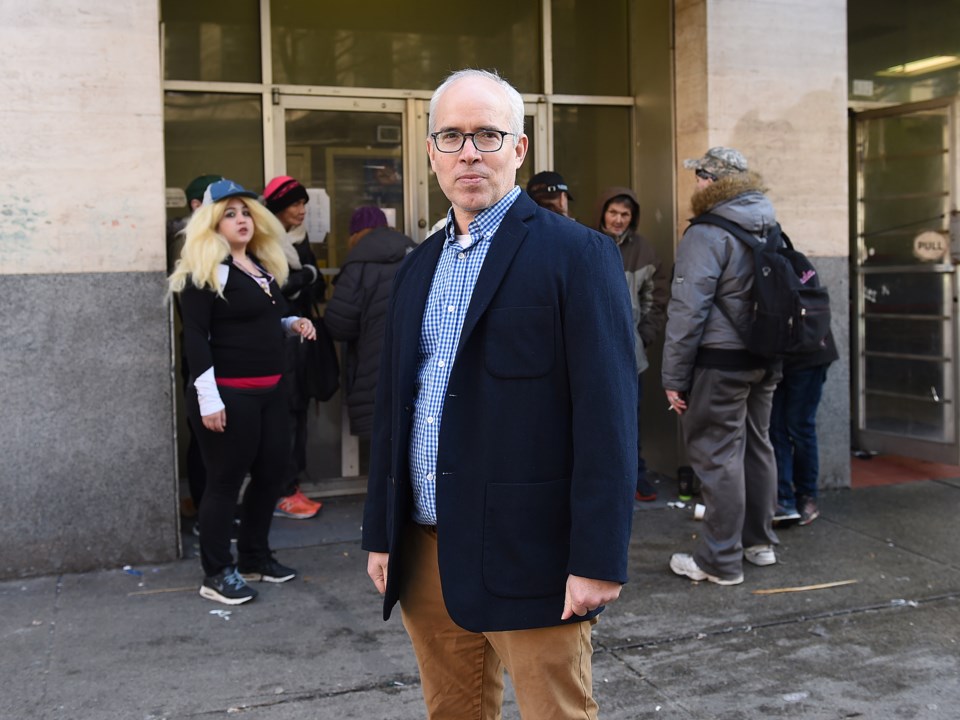 Dr. Scott MacDonald, lead physician at Crosstown Clinic, in a photo prior to the coronavirus pandemic. Photo Dan Toulgoet

She met with Dr. MacDonald and several of the clinic’s clients, including a young man named Kyle.

“He had been living in poverty, he’d been in a [single-room-occupancy hotel] in the Downtown Eastside, severely addicted and Crosstown turned his life around,” she said, noting Kyle managed to obtain a diploma and was working as a cook.

“He also told me he was going back to school to get a hairdressing diploma. I remember saying to him, ‘Wow, two diplomas.’ And he said, ‘Yeah, a guy’s got to have options.’”

“I learned a lot very quickly — and in a lot more depth than I understood before — about how medication-assisted treatment can make an enormous difference in people’s lives.”

So will the Crosstown model be expanded?

Darcy: “I don’t want to keep repeating myself, if you’re OK with that?”

More than 5,000 people died in B.C. of an overdose between Jan. 1, 2016 and the end of last year. At least 16 per cent of the deaths involved heroin, according to the B.C. Coroners Service.

Meanwhile, the pandemic persists and there are more stories to tell.