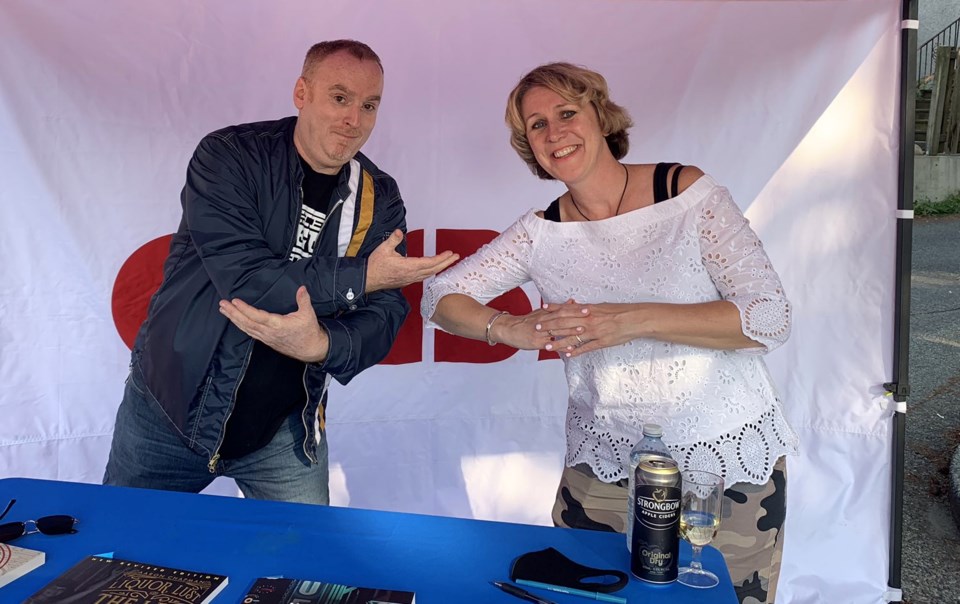 A photo of Vancouver City Councillor Sarah Kirby-Yung not practicing physical distancing while apparently legally drinking in public has surfaced. And by surfaced, I mean she made the odd decision of sharing the image to her Twitter account.

Seemingly following our Mayor Kennedy Stewart's "Do as I say, not as I do" approach to following (that is, not following) COVID-19 guidelines while out in public, the councillor was at the launch of the newly-opened public drinking plaza on Cambie at 17th Ave when the photo was taken.

It shows local author and historian Aaron Chapman and Kirby-Yung hamming it up within a few inches of each other under a canopy set up by the Cambie Village Business Improvement Association. A face mask and a half-drank glass of Strongbow cider sit on a table in front of her.

The tweet, which includes two other photos, is shown below. Explaining it to Vancouver Is Awesome, Kirby-Yung said in a DM that "It was a two-second elbow bump. Appropriate  physical distancing was maintained throughout the evening. It was an outdoor event as recommended by the PHO as the safest way to socialize. It’s a good reminder to all of us to be vigilant even for a few brief seconds. Safety protocols matter." 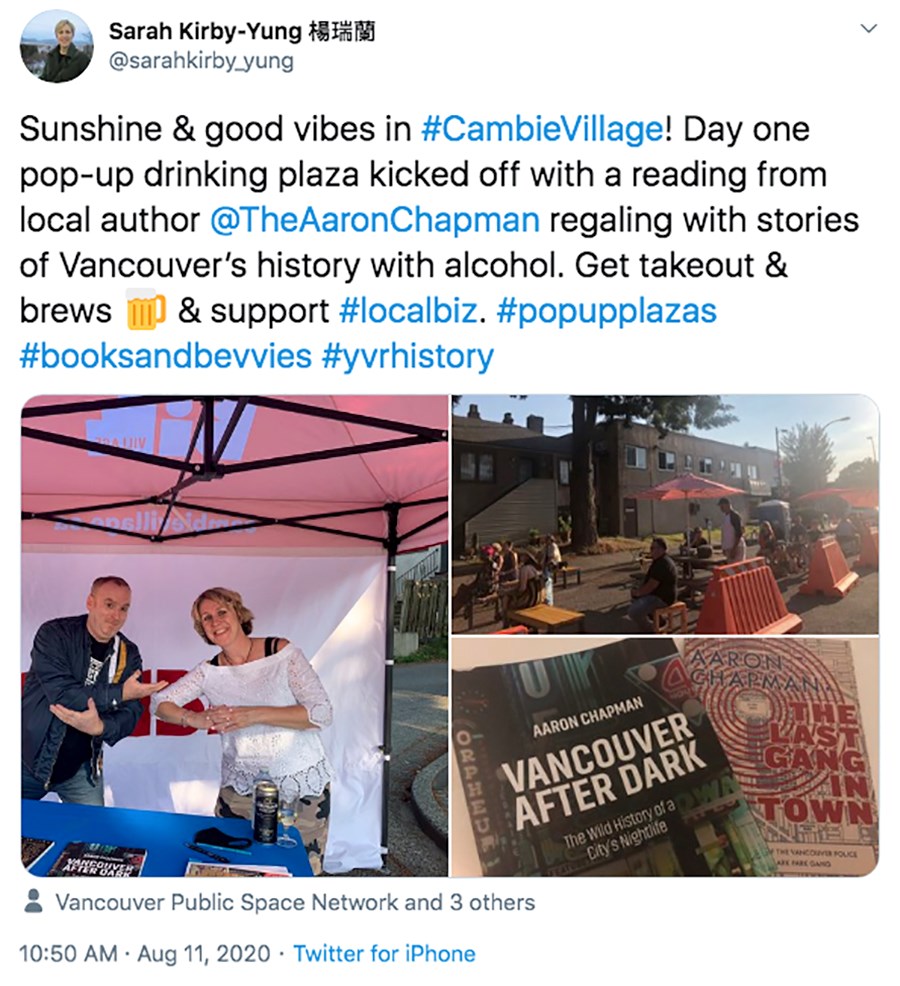 Four temporary plazas opened up this week. They're the City's answer to allowing people to drink alcohol in some public places after a failed attempt by the Park Board to open up parks and beaches to drinking during these weird and uncertain times.

In case you weren't aware (let's say, perhaps, you were literally just born), for the past few months B.C.'s Public Health Officer, Dr. Bonnie Henry, has been telling the public daily that we should stay at least 6 feet away from people not in our bubbles, to help prevent the spread of COVID-19. If we can't do this, she says we should wear a mask. Like, say, the one sitting on the table in front of the councillor here.

Dr. Henry isn't known for coming down on people who blatantly disregard her rules and recommendations, even politicians who should be setting an example, so (in my opinion) in some cases that leaves it up to the media to do that work for her.

So here we go: Be kind, be calm, be safe, and whatever you do please don't follow the example that some of the elected officials in Vancouver have been setting for you.

For the health and the safety of my family and yours, I hope you can do it.

Kirby-Yung is also hopeful. In fact just yesterday she shared a message on Twitter saying that "We all need to do our part to follow health guidelines and keep people safe. Or we’ll never get to recovery."

Ain't that the truth. 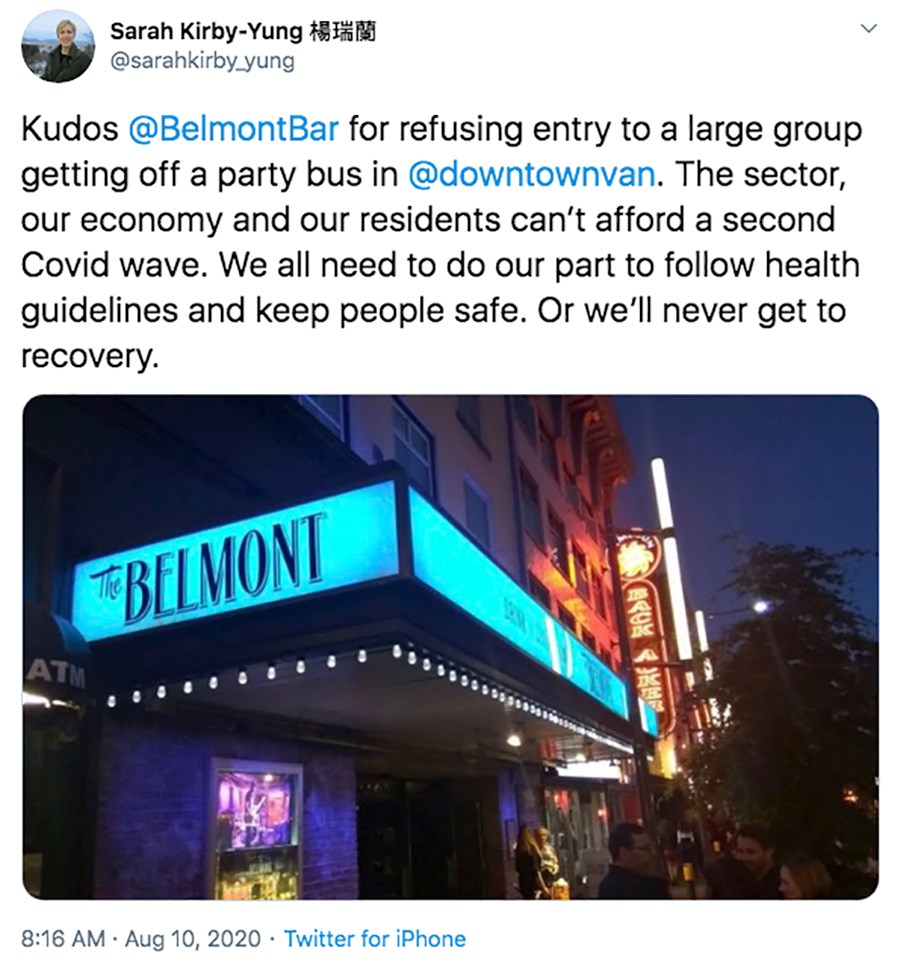 OPINION: Count on signs for an early election in B.C.
Sep 13, 2020 6:10 PM
Comments
We welcome your feedback and encourage you to share your thoughts. We ask that you be respectful of others and their points of view, refrain from personal attacks and stay on topic. To learn about our commenting policies and how we moderate, please read our Community Guidelines.