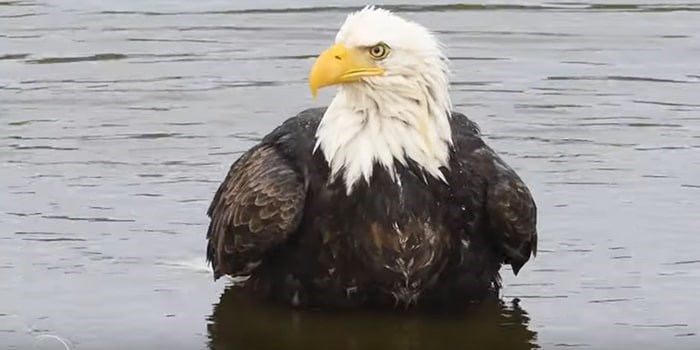 It took Vancouver photographer and videographer Christian Sasse three years of intense patience and dedication to succeed in capturing what he describes as “one-of-a-kind” footage.

“It is probably the most unique material [of eagles] that anybody has anywhere in the world,” he told Vancouver Is Awesome.

“To film eagles bathing is extremely difficult. Some people have done it but they’ve done it near the nest. But like this, I haven’t seen any footage like this anywhere – that’s why it is going completely viral all around the world. It’s crazy.”

The video posted to his Facebook page - Sasse Photo - has already been viewed more than 100,000 times.

Sasse said the videos were filmed between 2015 and 2019 across several locations in Metro Vancouver, including along the shores of Boundary Bay. He said the footage was typically shot during January and February when there are enormous migrations of eagles in British Columbia.

He said it was rare to capture eagles bathing because of their behaviours.

“Eagles don’t like to be below your line of sight, because they feel threatened,” Sasse explained.

“Eagles always want to feel in charge and they want to be higher up. So once they are at a level that is below your eyesight they get really skittish.”

It took days and days of hanging out where the eagles were for Sasse to gain their trust.

“You have to have incredibly long lenses and patience,” Sasse said.

“It took me days to get their trust, so that I could get a little bit closer. After a while they would see I’m not a threat anymore.

"That’s why it’s so difficult.”

Sasse’s interest in photography and especially eagles started in November 2011.

“I went to the Fraser Valley Eagle Festival and was overwhelmed by the nature and density of eagles,” he wrote on his Facebook profile.

From then onward he was hooked and started focusing on improving his photography and image processing techniques, so he could capture better photos. 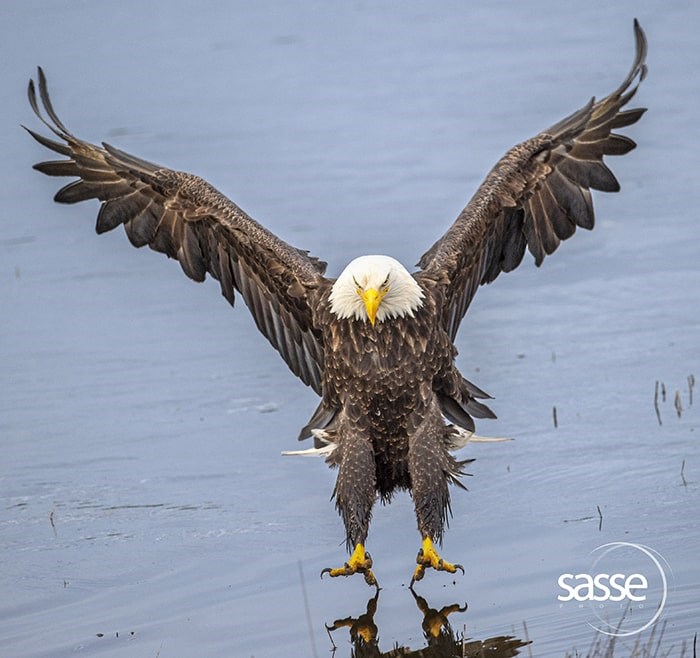 Christian Sasse’s favourite eagle photo: “It is a very rare moment where everything is perfect, the direction of the eagle landing, the wind and light as well as timing.” Photo courtesy of Christian Sasse

He told V.I.A his favourite photo he had ever taken was of an eagle directly approaching the water and just touching the surface.

“It is a very rare moment where everything is perfect, the direction of the eagle landing, the wind and light as well as timing.

“An image like that takes years – you get one shot at it.”

Over the years, Sasse has also worked and built a friendship with David Hancock, founder of the Hancock Wildlife Foundation, who he credits with teaching him a lot about eagles.

“I’ve known David since 2011. He has taught me a lot about wildlife, how to approach wildlife and how to understand eagles,” he said. 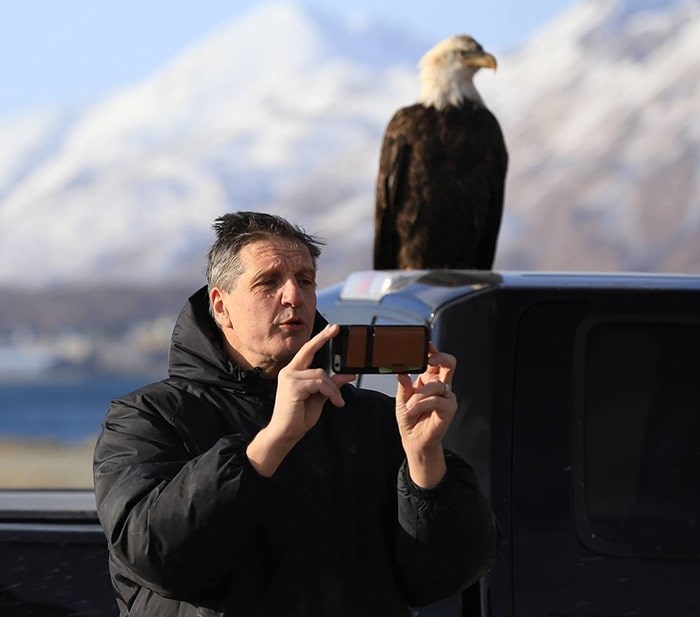 Christian Sasse stops to take a selfie with an eagle while out on a photo shoot. Photo: Sasse Photo Facebook

Sasse said he could watch the “beautiful” birds for hours and never tire of them.

“They have feathers that look like thunder coming from the sky,” he described.

“They have this majestic beauty and an incredibly sharp look like they are almost aware of everything around you.