A Richmond developer has pulled the plug on a 15-storey mixed use residential tower in the city centre, leaving more than 100 pre-sale buyers in the lurch.
Richmond News Jul 19, 2019 4:01 PM

A Richmond developer has pulled the plug on a 15-storey mixed use residential tower in the city centre, leaving more than 100 pre-sale buyers in the lurch. 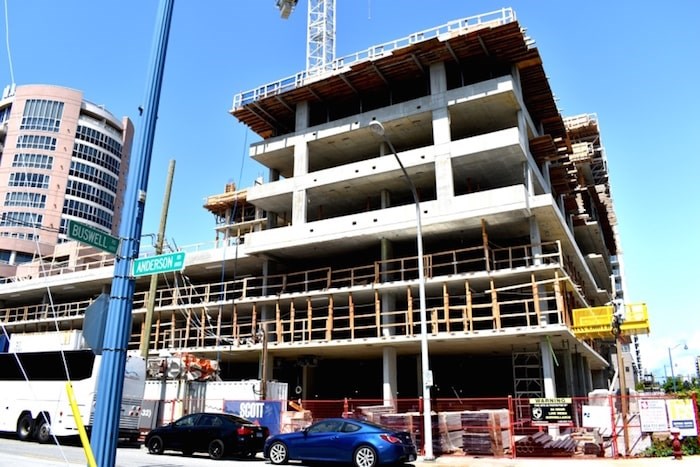 The Alfa development on Anderson Road at Buswell Street in Richmond. Photo by Maria Rantanen/Richmond News

It’s not clear why the contracts have been cancelled, but in last week’s notification to buyers, there is a reference to the developer being sued for $4.6 million by a construction company.

One of the buyers left hanging is Jeremy Hsu, who shelled out a $36,000 deposit in 2015 for a 650-square-foot, one-bedroom condo at Alfa, where construction began earlier this year.

Hsu and his wife, who live in Richmond, were planning to use the condo as an investment.

He has now rallied together a total of 25 pre-sale buyers on the Chinese-language social media platform WeChat and is considering launching a class-action lawsuit seeking compensation.

“My wife and I have been waiting for four years to close the house deal, but the message from the developer has left us saddened and frustrated,” Hsu told the Richmond News on Thursday.

“If we bought other condos back at that time, the home value would have already doubled.

“But the developer has suddenly terminated our contract and only refunded us the deposit and interest, which is unfair.”

Originally, Hsu, and the other 100 or so pre-sale buyers, expected to close the deal in the fall of 2018, but the developer postponed the date until September this year.

“We have (suspicions) that the developer might sell the land to another developer at a higher price, so they kicked us out by only paying us deposits and interest rates.”

If the developer is in some kind of financial difficulty, Hsu said he would rather wait it out, than lose out on his potential investment.

Another couple affected by the dead deal is a former Richmond resident, who moved to Calgary in 2012, but was planning to move back with her husband to her home city to retire.

“We felt so upset that can’t return back to the community we love,” said the woman, who is also part of Hsu’s WeChat group.

The News made several attempts to get in touch with the Sunny Ho, who has yet to return our calls.

Ironically, last September, Ho helped form a Richmond-based organization which claimed to have a solution to the city’s housing affordability problem.

He also set up in 2017 the Richmond Business Association, where he is president, and twice ran unsuccessfully for city council in the 2018 and 2014 municipal elections.

The Alfa development was to be a 15-storey, mixed use residential tower, with 12,000 square feet of retail space at the ground level plus 111 condos.

In May of 2018, the News reported how Alfa was going to be built with geothermal energy — found beneath the Earth’s surface — as the main power source for its homes.

Map: Here are the cheapest neighbourhoods for rent in Metro Vancouver this October
Oct 5, 2022 12:05 PM