Architects step up to build better homes in Indigenous communities

Canada’s Architects Without Borders (AWB) may have already come up with solutions to help alleviate the generally poor housing conditions in Canada’s 600 Indigenous communities and reserves, the bulk of which are in B.C. and Ontario.
0
Sep 13, 2018 12:44 PM By: Frank O'Brien

As part of its $1.5 billion housing plan for Indigenous Canadians, the federal government has launched a $30 million contest to encourage new residential ideas.

But Canada’s Architects Without Borders (AWB) may have already come up with solutions to help alleviate the generally poor housing conditions in Canada’s 600 Indigenous communities and reserves, the bulk of which are in B.C. and Ontario. 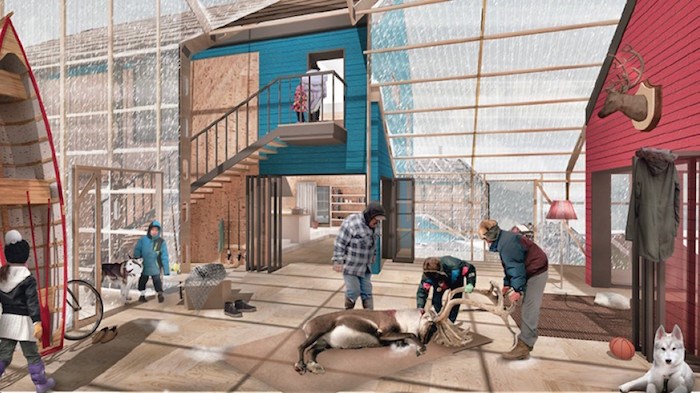 The winning entry in an Architects Without Borders competition to improve Indigenous housing envisions a contemporary community with homes clustered with shared space and utilities?(Architects without Borders)

In 2017, the Winnipeg-based AWB held an Indigenous Housing Competition to “improve opportunities to design, deliver and maintain housing” for remote Indigenous communities. The federal Liberals are offering the $30 million to Indigenous communities with the contest, it says, to entice private-sector builders to get involved in constructing and repairing homes in First Nation, Inuit and Métis communities.

Details are scant on how any federal contest prize money would be distributed, with details to be released this fall.

The government said it is looking to fund projects that can be replicated in other communities, bring back traditional Indigenous building styles and techniques, and create an economic boost for communities that could include sourcing materials locally or providing job training to young people.

The competition attracted 80 entries from around the world. The winning entry by architectural students Marie-Claude Gravel, Pierre-Olivier Demeule and Antonin Boulanger Cartier of Quebec City conceives a new housing development strategy for the Inuit community of Salluit in Nunavik, northern Quebec.

The team’s concept called for contemporary open-plan homes clustered close together to reduce infrastructure costs and provide storage for hunting and fishing equipment. It also includes public spaces and an emphasis on using local workers and materials in the construction.