Nine years ago today, Canada got its Golden Goal in Vancouver

On this day nine years ago, Sidney Crosby scored one of the most iconic goals in Canadian sports history, leading Canada to a dramatic 3-2 win to close out the 2010 Winter Olympics.
0
Feb 28, 2019 1:07 PM By: John Kurucz

It started with a yell so loud that T.V. cameras picked it up clear as day. 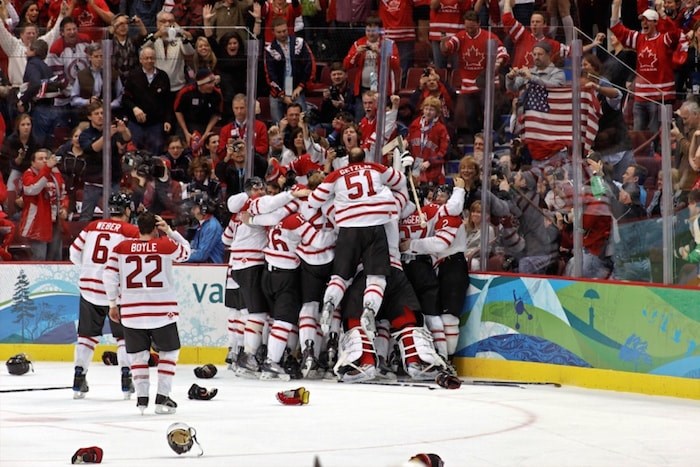 Seconds later, tens of millions Canadians hollered too and Vancouver was turned upside down.

On this day nine years ago, Sidney Crosby scored one of the most iconic goals in Canadian sports history, leading Canada to a dramatic 3-2 win to close out the 2010 Winter Olympics.

The Games concluded on Feb. 28, 2010, bringing to a close what was Canada’s best medal showing at a Winter Olympics at the time.

Crosby’s goal at 7:40 of overtime was preceded with a manic yell to linemate Jarome Iginla, who fed a pass to the Pittsburgh Penguins captain in the low slot, just left of the American net.

Scoring from what looked to be an awkward angle, Crosby’s seeing-eye shot beat U.S. goalie, and future Canucks netminder Ryan Miller, through the five hole.

Canuck goalie and future Hall of Famer Roberto Luongo backstopped the Canadian side with 34 saves on 36 shots.

It almost wasn’t so.

After Canada opened up 1-0 and 2-1 leads, the U.S. tied the game on a goalmouth scramble with less than 30 seconds left to play in the third period.

But like Wayne Gretzky and Mario Lemieux before him, Sid the Kid came through when it mattered most, tallying what is now known as the “Golden Goal.”

The gold medal contest was the most watched hockey game in close to 30 years at the time, with almost 27 million Canadians watching at least some portion of the Sunday afternoon clash. Scalper tickets were going for as much as $10,000 a pop.

And while the win avenged the stench of the men’s team performance in 2006 — Canada finished with a putrid seventh-place showing — the women’s team was in the midst of non-stop winning.

Led by tournament high scorer and Vancouver Police Department Constable Meghan Agosta, the Canadian women dusted off the Americans 2-0 in the gold medal final on Feb. 25, 2010.

It was the third straight women’s gold medal win in a glorious 12-year run of nothing but gold for the women’s team. Agosta finished atop the scoring race with 15 points (nine goals and six assists) in five games.

Both of Canada’s goals came off the stick of Marie-Philip Poulin, with Agosta registering an assist on the 2-0 tally.

Shannon Szabados was perfect in the Canadian net, turning away all 28 shots she faced.

Here's how the hockey world is looking back at those halcyon days on social media.