“The real question to ask in this pandemic era is, do fans feel comfortable enough, even with capped attendance, to go to sporting events?”
Jun 19, 2020 10:14 PM By: Chuck Chiang 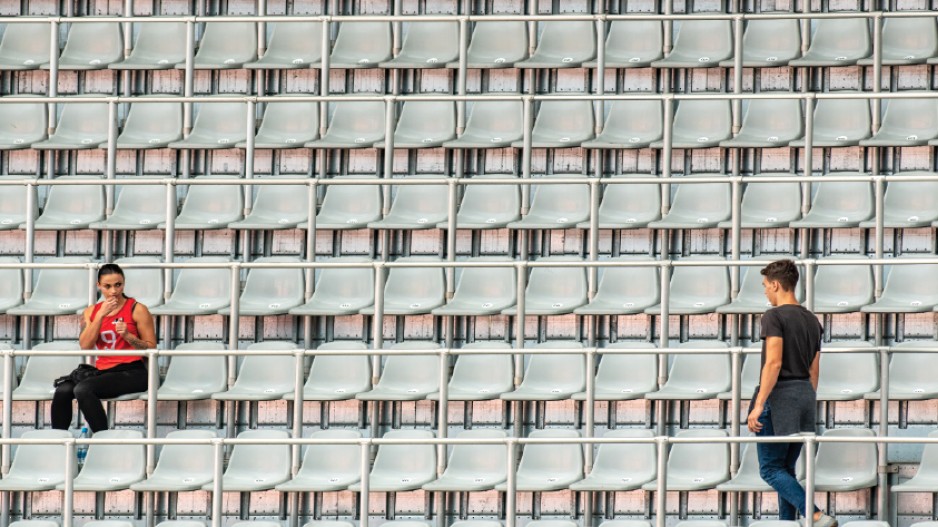 With fans and gate revenue so crucial to the business models of professional sports leagues, can a live-attendance scenario post-COVID without a vaccine work? And what will it look like when health authorities give the sports sector the go-ahead?

For Blair Whitmarsh, dean of the School of Human Kinetics and Athletics at Trinity Western University, the pre-COVID image of what going to a game looks like will bear little resemblance to the post-COVID live-sports scene.

“Depending on location and sport, it is estimated that the number of fans will range from as low as 20% of capacity to as high as 50% capacity,” Whitmarsh said. “Much of the seating will have to be sectioned off so that physical distancing can be maintained or even removed.”

The 50% number coincides with Texas Gov. Greg Abbott announcing in early June that professional and collegiate sports in the state will allow fan attendance up to half of the capacity of stadiums.

In addition to the reduced attendance numbers, staggered entries and exits and the wearing of masks, fans will also likely face a new battery of temperature checks and other health tests before being allowed into a stadium.

“Usually when you go to a game, you say, ‘OK, 15 minutes, and then we are inside the stadium,” said Aziz Rajwani, sessional lecturer at the University of British Columbia’s Sauder School of Business. “Now, you may see even more airport-style security checks, and will people feel comfortable that they might have to arrive more than an hour early for a game?”

One way to mitigate the need for such checks, Rajwani said, is to use technology.

“Companies are making a lot of money these days by providing large employers with self-check tools on the computer, where employees would punch in things like their temperature every morning and answer 10 to 20 questions, and then the program would spit out a response and say either to stay home or go to work,” Rajwani noted. “So you can require a fan base to do the same.”

Analysts say that other measures fans might see at games include prepackaged food boxes instead of the typical stadium staples like hot dogs and nachos, limiting beer sales to cans and bottles, shutting down sections of seating and making hand-sanitizing stations ubiquitous.

All of this begs the question: would fans return under such changed circumstances? And – if no vaccine is available – can people truly achieve the escape that sporting events look to provide in a gathering of strangers?

“The real question to ask in this pandemic era is, do fans feel comfortable enough, even with capped attendance, to go to sporting events?” Rajwani said. “Just because the government says you can go, it doesn’t change what’s in the the fans’ minds.”

One way to mitigate the economic impacts of lower gate revenue and the need to do more for fans who do attend, Whitmarsh said, is for sports clubs to present themselves as an integral part of the community as much as possible, no matter the short-term economic implications.

That means that incentives like prepaid reductions on season tickets next year or concession gift cards for loyal fans – both of which were included in the offer made by the Canadian Football League’s (CFL) BC Lions to ticket holders last month – will be vital even if they hurt the bottom line in the short term, because those initiatives will maintain the brand to ensure a stronger recovery when things return to normal.

The alternative, of fans staying home and watching on television or mobile devices, was already happening prior to the pandemic.

A PwC report last year showed that the professional sports media rights market in North America surpassed that of gate revenue for the first time in 2017 (US$19.1 billion compared to US$19 billion), and that trend will accelerate as fans stay home this year at first to watch the empty-stands edition of pro leagues returning to action.

“Many people will determine that watching at home on their big-screen TVs is more comfortable,” Rajwani said. “I can have my iPad on to follow the stats as they happen. The beer I have will be $2 instead of $8 at the game. So the risk is there for the cannibalization of gate revenue – and that was happening pre-pandemic….”

But while that may be an option for new economic model for major leagues, with the National Football League, Major League Baseball and the NBA raking in anywhere from US$1.5 billion to US$6 billion annually from TV deals, leagues like the NHL and the MLS will suffer more. And those like the CFL and minor-league sports, heavily dependent on ticket sales, will potentially face a harrowing future.

“There will be minor leagues that, if this goes on for a long time, will go six feet under because of six feet apart,” Rajwani said.

Whitmarsh is more optimistic. He noted that the strong pull of professional sports for their fans should not be underestimated – and attendance figures close to pre-COVID levels are possible in 2021-22 if there is a vaccine.

Vancouver Canadians ponder next moves after baseball season cancelled
Jul 2, 2020 7:53 AM
Comments
We welcome your feedback and encourage you to share your thoughts. We ask that you be respectful of others and their points of view, refrain from personal attacks and stay on topic. To learn about our commenting policies and how we moderate, please read our Community Guidelines.