For those rare few of you out there who have actually raced a full Ironman Triathlon, how did you feel the next day?

Chad Bentley emerges from the water during one of the swims in the Epic-5, an adventure race that involved completing five full Ironman Triathlons in five days on five different Hawaiian islands. (Photo: Colin Cross)

That is exactly what North Vancouver’s Chad Bentley accomplished recently, completing the gruelling Epic-5 adventure race, five full Ironman Triathlons in five days on five different Hawaiian islands. Not bad for a man who looks back on his life 15 years ago and describes his former self as a “250-pound fast-food junkie” who smoked a pack a day and was a “heavy, heavy beer drinker. Super heavy.”

So how did Bentley go from an overweight party guy to an ultra-Ironman? He was basically embarrassed into a lifestyle change, said Bentley.

“I was at a dinner party one day and a couple of strangers said to me, ‘Are you ever worried about having a heart attack?’ I got super embarrassed, and that was kind of my shift, my turning point.”

Soon after that moment Bentley stopped his partying ways and went to a completely plant-based diet. He also switched from the sports of his youth to endurance races and triathlons. It was not the way he expected his life to turn out.

“I never thought I really fit in with the whole Ironman scene,” he said. “I was more of a rugby player than a triathlete.”

But he did fit into the triathlon scene, starting with a base of strong swimming and good cycling and finishing off races with a tough-if-not-graceful running style. In 2006 he did his first half-Ironman and since then has become a multi-time Ironman finisher and Ultraman World Champion finisher.

Nothing, however, prepared him for the Epic-5, a race which hosts a maximum of 10 participants per year. Of the 70 people who have attempted it before this year’s event, only 25 had finished all five races.

“I wouldn’t really consider it a race,” said Bentley. “It’s a challenge. It was an adventure. … They said it was Ironman meets Amazing Race.”

The Amazing Race-style twists and turns started early this year as Hurricane Lane cancelled Bentley’s first flight to Hawaii and threatened to derail the whole event. He made it out, though, and Race No. 1 went off just a bit behind schedule on Kauai, with this year’s five contestants heading off into what had now been downgraded to a mere tropical storm, not a full-blown hurricane. 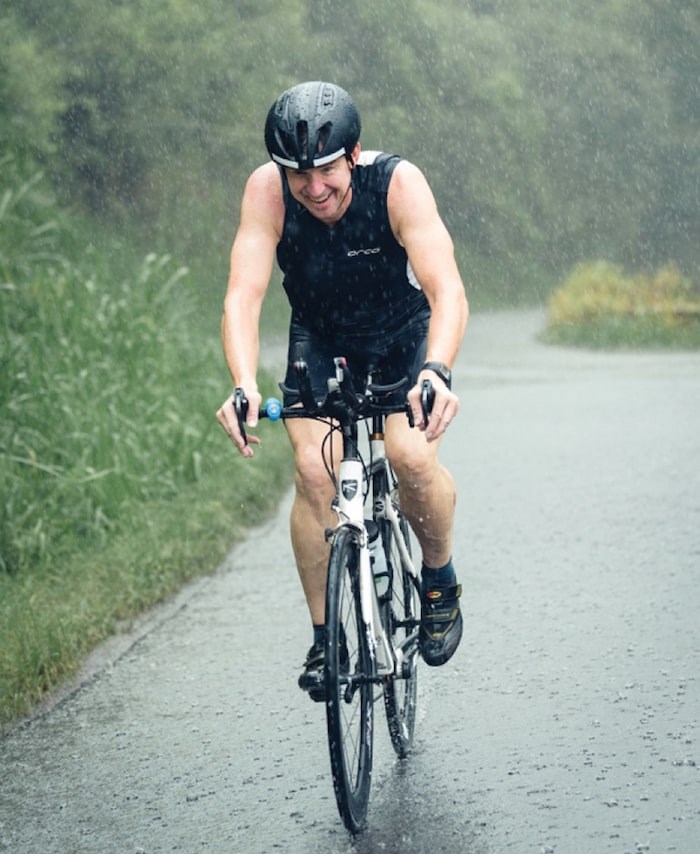 Chad Bentley keeps smiling through the first leg of the Epic-5 adventure race, which was completed in a tropical storm. Photo: Colin Cross

“I’ve never been in rain that hard ever in my life,” said Bentley, adding that the island got 200-millimetres in a span of six hours while the race was on. “I was going through puddles that were a foot deep. … I came close to a big wipeout but luckily I pulled out of it. It was something else. Being from North Vancouver, Deep Cove, I was used to rain. And to be honest with you, it was super warm. So it wasn’t that bad.”

There was no time for pity, however, as the contestants moved over to Oahu for Day 2, getting to bed at around 2 a.m. for a 6 a.m. start to the second race.

Race 2, which included sections in Waikiki, brought its own particular challenges.

“I got lost for about an hour off the course,” said Bentley. “I had to go into a Starbucks at the Waikiki Zoo and phone my wife in Vancouver and get her to phone my crew.”

He eventually found the transition he was looking for and finished the second race, with an extra 15 kilometres of biking tacked on in the confusion.

“That doesn’t sound like much on a bike, but when you’re on your second Ironman, it is.”

Day 3 on Molokai was the dream race, said Bentley.

“It was gorgeous. It was spectacular. It was paradise. It’s really quiet, no traffic. It was a really, really special island.”

Race No. 3 was in the books, but the event was taking its toll. Each day involved more than 15 hours of racing, each finish line coming in the middle of the night. There was little or no sleep as the contestants moved on to the next island for the next start line. Day 4 on Maui hit Bentley hard.

“That was a really hard day. It was an open water ocean swim, lots of big currents and waves. The bike course was super hilly and lots of wind,” he said. “Fatigue had really set in.”

Day 5 on Hawaii came with a few perks to get the racers over the finish line. Bentley’s wife and children arrived to cheer him on, and the final leg of the journey was held on the Kona course that is home to the Ironman World Championships every year. It’s a mecca for triathletes.

“Beautiful swim. Just spectacular,” said Bentley. Then came a tough ride, made tougher by the fact that sleep-deprived Bentley had heavy eyes as he raced down the Big Island’s mountains.

“Every hour and a half I would have to stop and take a little nap in the car,” said Bentley. “Five minute power naps – that would help keep me from seeing double.”

Finally the last run, his fifth marathon in five days, and those blisters from Day 1 had only gotten worse. 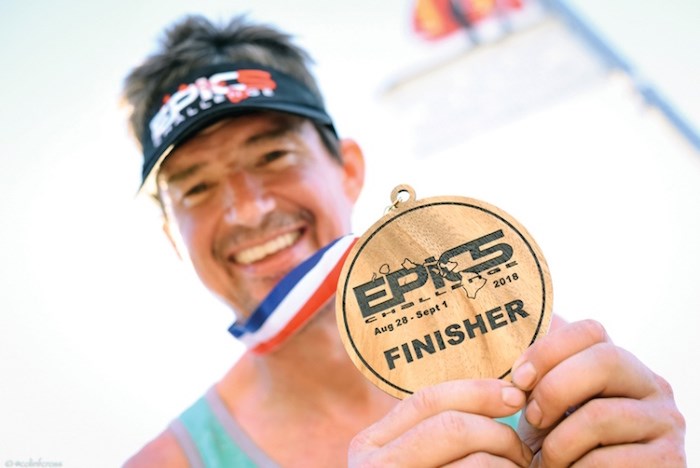 “Every step I took was so painful,” he said. “My feet were so torn apart. It was terrible. I basically walked. I tried to jog when I could, but it was crazy. Plus I was super tired.”

Finally he came within sight of Kona and knew that he was nearly finished what had been by far the longest marathon of his life.

“I knew that it was four kilometres, that’s it. It just felt great. I felt like I woke up a little bit. It was amazing,” he said. Two organizers were at the finish line with a little piece of string.

“It’s such an uneventful finish line,” he said with a laugh. “You break the tape, and then that’s it. It’s over. Then you celebrate with your crew.”

How did it feel to race five Ironmans in five days?

“It’s total suffering, but it’s kind of sweet suffering,” he said with a chuckle. “It’s hard to explain.”

The pain was well worth it, however, when Bentley tallied up the funds that he had raised while training for the race and knocking off the five legs. His wife, North Vancouver promoter extraordinaire Mary-Jo Dionne, drummed up huge support for Bentley as he embarked on his ridiculously hard quest. In the end they raised around $41,000 to be split between five charities, all related to children: Canuck Place, Minerva’s Indigenous Roots program (an outdoor leadership training program for Aboriginal girls), the Millipede Project which provides back-to-school shoes for kids in need, CNIB kids’ camps, and Terry Fox pediatrics.

Presenting cheques to the charities made this adventure something much more special than a typical race, said Bentley.

“Doing big races can just end up being somewhat selfish and it’s just another finish line,” he said. “I wanted to make this somewhat of a legacy race where I was doing something that was going to leave a lasting impact.”