So to help convince the soon-to-be free agent, Jacobs has turned to his own area of expertise: Lego.

In a stop-motion video that's gone viral, Jacobs used the toy pieces to meticulously recreate Leonard's famous buzzer-beater moment against Philadelphia in Game 7 of the second round. 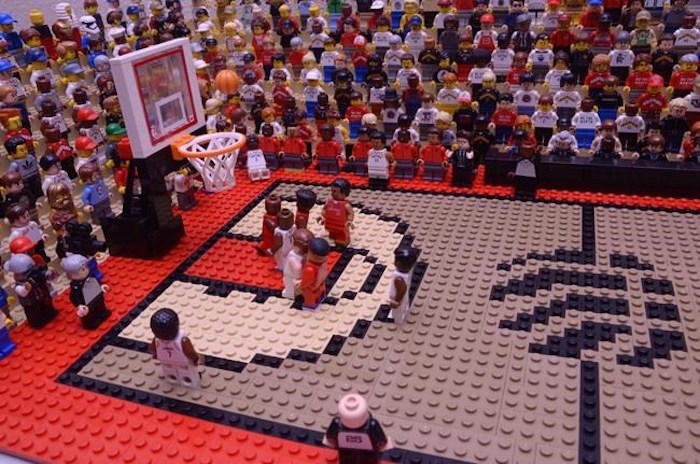 A scene from a viral stop-motion video of Kawhi Leonard’s buzzer-beater moment created by Jared Jacobs is seen in this handout photo. Calgary-raised stop-motion animator Jared Jacobs is a big Toronto Raptors fan and wants star player Kawhi Leonard to stay with the NBA Championship team. So to help convince the soon-to-be free agent, Jacobs has turned to his own area of expertise: Lego. THE CANADIAN PRESS/HO, Jared Jacobs

"It was one of those things where I was like, 'Maybe this will make a difference in Kawhi picking Toronto, like the plant guy,'" Jacobs said Tuesday in a phone interview from his home in Boise, Idaho.

Jacobs was referring to a Raptors fan who became an Internet sensation for carrying an uprooted large plant in the streets of Toronto after the championship win, telling Global News it was "a housewarming gift for Kawhi ... a Kawhactus."

"The Internet is a weird place, so every little bit helps and that was my contribution," said Jacobs, 41.

"I didn't have any housewarming plants, so I just put a Lego video together for him."

Jacobs said he started using Lego in his stop-motion work about five years ago after playing around with his nephews' pieces in his mother-in-law's basement during Thanksgiving.

He first used the interlocking plastic bricks and figurines to recreate a scene from the series "Breaking Bad" for his Instagram account, which he says got attention from some of the actors on the show.

Jacobs made more Lego videos and gained so much buzz, he quit his job to focus exclusively on them as a freelancer, landing contracts with companies including Bleacher Report, the Golf Channel, and the NHL Network.

Jacobs said he wanted to recreate the Leonard buzzer-beater scene earlier but felt it was a conflict of interest because he was doing work for the Golden State Warriors during the Finals.

He isn't sponsored by Lego (although he'd like to be) and has to custom-make many pieces.

For the buzzer-beater project, his graphic-designer friend created the jerseys.

"With Kawhi's hair I just had to use a nail file to make it look like it was cornrows, because Lego doesn't make cornrows," Jacobs said.

"I ruined a couple of my hair pieces trying to get it to look just right."

Jacobs made the video in his usual workspace: a corner of his and his wife's bedroom. It's an upgrade from the kitchen table, where he used to work. He said he's soon getting a studio.

"We have so much Lego now that we feel like we're swimming in it," Jacobs said.

Jacobs makes his videos solely himself, using a DSLR camera.

The buzzer-beater one took about 40 hours to make, not including the research he put into it.

The end where the crowd jumped up and down raising their hands was "painstakingly long," he said, requiring him to move dozens of little people at the same time each frame.

Leonard's shot bounced four times, but Jacobs had to take a bounce out in order to properly link the sound up with the visuals.

"The attention to detail that you have to pay, it's kind of exhausting, actually," Jacobs said.

"Back when I used to work in construction doing manual labour, this is actually more physically taxing on me.... I think it's just the brainpower that goes into it. It's just that hyper focus."

Jacobs said he hasn't heard whether any Raptors players have seen his video, but the team has posted it on its Instagram and Twitter pages.

"This one is cool just because it's something that has blown up in Canada, which is my homeland," he said.

"It's just cool to see all the Canadians come out of the woodwork and appreciate my work. That special to me."