Canucks fan group the Larscheiders are about being engaged with this year’s surprisingly good team and having fun at the rink again.
0
Oct 29, 2019 4:08 PM By: Grant Lawrence 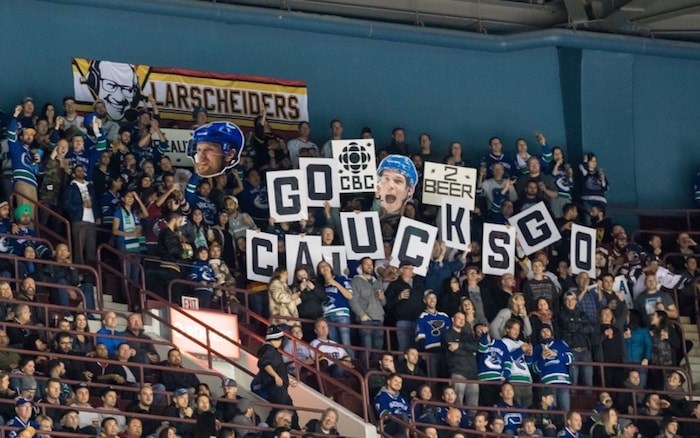 “What’s going on up there?”

That’s the question I asked a friend who took me to the Canucks’ home opener this year. In a couple of corner sections of the upper bowl, usually considered to be the worst seats in Rogers Arena, there appeared to be some sort of raucous party going on. Like people were actually having fun or something.

It was a special game to be sure: the Canucks were naming Bo Horvat their new captain and celebrating the start of their 50th season. It was thrilling to see reps from all five decades skate out in the uniforms of their era: Dennis Kearns, Stan Smyl, Kirk McLean, Todd Bertuzzi and Daniel Sedin.

Having previously considered myself a lifelong Canucks fan, my interest in the team had been waning for close to a decade, turned off by the riots after the 2011 Stanley Cup Final and the unraveling of that great team that followed. In recent seasons, most fans at the games seemed more entertained with what was on their phone than what was on the ice.

This year’s home opener was clearly a special night, and fans throughout the arena loved it, though it’s hard to clap with a phone in your hand. But the colourful bunch near the rafters in sections 325 and 326 were all on their feet, going absolutely bananas with banners, signs, costumes and an array of colourful Canucks uniforms through the decades.

Then I noticed the banner on the back wall: It read “Larscheiders,” and featured a smiling photo of the Canucks’ legendary colour commentator of 27 years, the great Tommy Larscheid. His broadcasting passion was simply unmatched, and I absolutely loved listening to him.

It was his fire in the belly that allegedly cost Larscheid his job, when he apparently showed too much pure fervour in a live, pre-game speech on the radio during the 2010 playoffs.

Among other challenges he made to the team about to take the ice, Larscheid pointed out the massive canyon between the pay cheques of then-Canucks’ goalie Robert Luongo and the Blackhawks’ Antti Niemi (the underperforming Luongo made close to $10 million more that year than Niemi).

The series ended badly, with the Canucks getting the skate boot from the Blackhawks, who went on to win the Stanley Cup. At age 70, Larscheid was supposedly forced to hang ’em up.

Cut to March 2016. That’s when local sports writer Rob Williams wrote a scathing article about what a pathetic experience attending a Canucks game had become, stating that the “once raucous arena has the atmosphere of a library,” and went on to state that from the moment the Canucks’ 2011 Cup run ended, “the atmosphere has been dying a slow death ever since.”

Someone in Canucks’ management agreed and got in touch with Williams about coming up with a tangible idea to create something similar to the Southsiders, an organic fan group that helps create the electric atmosphere often found at Whitecaps soccer games.

Williams brought on his hockey buddy and East Van childhood friend Carlo Bodrogi to co-found their own fan group. They started with a Facebook page and soon had more than 100 interested fans. The unnamed bunch made their loud and colourful debut in the rafters of a Canucks/Jets game in December 2016. They were an instant hit, and momentum has steadily grown, but they didn’t find their name until their second year. 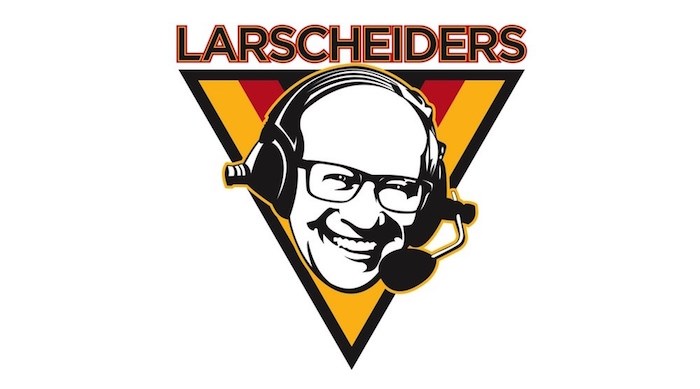 Williams and Bodrogi realized that the passion they were trying to bring back was largely extinguished when Larscheid was ushered from the airwaves.

“After we picked the name, Rob and I sat down for coffee at the Oakridge White Spot with Tommy, and he wholeheartedly supported the endeavour and spent almost two hours telling us old stories,” explained Bodrogi. “Our hearts exploded. Larscheid's straight-talking passion is what made him different from all the other voices, and we felt that his energy was exactly what we wanted to embody. It's been a big success ever since, which real fans from an array of backgrounds and ages have flocked to.”

Any fan can join the Larscheiders, now in their third season, as long as they follow the group’s 10 commandments of conduct, some of which include:

The Larscheiders also have zero tolerance for anything considered racist, sexist or in poor taste. Also, Alex Ovechkin clearly doesn’t suck, so don’t yell that he does. The group also points out they are not just about a cheap ticket and an expensive drunk.

It’s about being engaged with this year’s surprisingly good Canucks team and having fun at the rink again. The Larcheiders’ next game is Thursday Nov. 14, when Vancouver takes on Dallas. Maybe 79-year-old Tommy Larscheid himself will be living it up in the stands, on his feet and cheering with that group of Canucks fans who share both his name and his passion for the game.