Hometown talent to be showcased as NCAA basketball comes to Vancouver

The tournament will see some of the world's best collegiate basketball players face off over six days--and there are a few B.C. natives who will be hitting the hardwood.
0
Nov 15, 2018 4:18 PM By: The Canadian Press

Seeing family and friends in the stands is rare now that the Langley, B.C., native plays guard for the Gonzaga Bulldogs in Spokane, Wash.

But Forsyth expects many familiar faces in the crowd next week when she and her teammates head north to take part in the inaugural Vancouver Showcase. The tournament will see some of the world's best collegiate basketball players face off over six days.

The 19-year-old guard was "so excited" to hear her team would be part of the event.

"I couldn't believe there would actually be an NCAA tournament in Canada and in my hometown," she said.

Starting on Sunday, men's squads from the University of Washington, Santa Clara, Texas A&M and Minnesota will hit the hardwood in a round-robin showcase.

Then, eight women's teams will battle in a head-to-head tournament, beginning on Nov. 22.

"We know that we don't always get the chance to play the number one team in the nation," Forsyth said. "It'll be a really good opportunity to see what our team has and measure ourselves against the best."

"The goal is to challenge ourselves and figure out what our strengths are and what our weaknesses are so that we can make the adjustments that we need to make before conference play," she said.

Now in her second year with the Bulldogs, Forsyth is getting used to making adjustments.

Last season, she was acclimatizing to living away from home and juggling a slate of biology and environmental studies classes while playing NCAA Division 1 ball.

Her team cruised to their second-straight West Coast Conference title and punched their ticket to the NCAA tournament in March, where they lost to Stanford in the first round.

Forsyth saw action in 13 games and put up 10 points in her rookie campaign. This season, she's already come off the bench in three games.

"I've always been a hard worker, but being here has taught me that every single thing you do, it needs to be calculated," she said. "You can't just keep working harder, you have to work smarter. You have to take every single thing the coaches tell you and apply it right away." 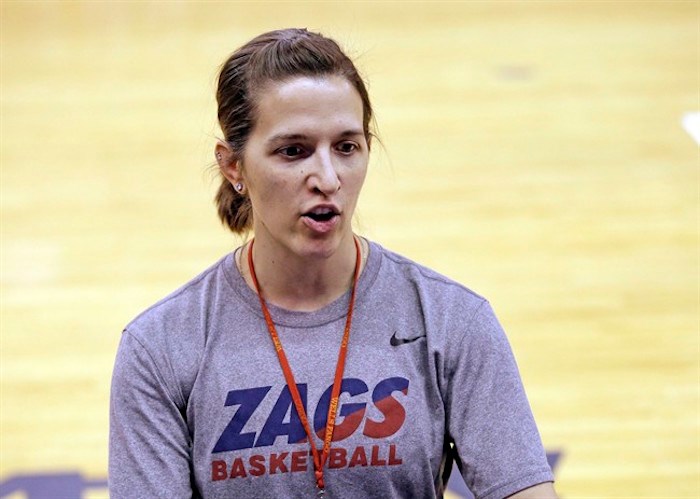 Gonzaga head coach Lisa Fortier talks at a practice a day before the team’s first round NCAA tournament college basketball game Friday, March 17, 2017, in Seattle. Gonzaga is among the teams taking part in the inaugural Vancouver Showcase. The tournament will see some of the world’s best collegiate basketball players face off over six days. THE CANADIAN PRESS/AP/Elaine Thompson

Fortier said the young Canadian is a tough, well-conditioned athlete who's always willing to push for results.

"I think that's going to ultimately help her — over the next three years — develop into a really, really good player," she said.

She already runs the floor hard and is great at stretching the defence, Fortier added.

"The thing that Lou does best is she shoots the heck out of the basketball."

Having a Canadian on the team is nothing new for Fortier. Centre Emma Wolfram from Kamloops, B.C., spent four years at Gonzaga before a knee injury ended her season last November.

No matter where her players are from, the coach loves finding opportunities for them to play in front of a hometown crowd.

"It feels different for those guys," Fortier said. "They play a little extra and they want it a little bit more."

Forsyth said many of her friends and family already have tickets for the Vancouver Showcase. Her high school's basketball team is also planning to come out, as are some of the local clubs she used to play with.

"This is the first opportunity for a lot of them to see me play since high school," Forsyth said.

"There's definitely a lot of pressure, but I just take it as a great opportunity and one that I'm lucky to have."