The city’s three major-league professional teams – the Vancouver Canucks, BC Lions and Vancouver Whitecaps FC – have all struggled in competition and at the turnstiles.
0
Jul 16, 2019 4:24 PM By: Chuck Chiang

The last few years have been hard times for Vancouver’s sports fans.

The city’s three major-league professional teams – the Vancouver Canucks, BC Lions and Vancouver Whitecaps FC – have all struggled in competition and at the turnstiles. 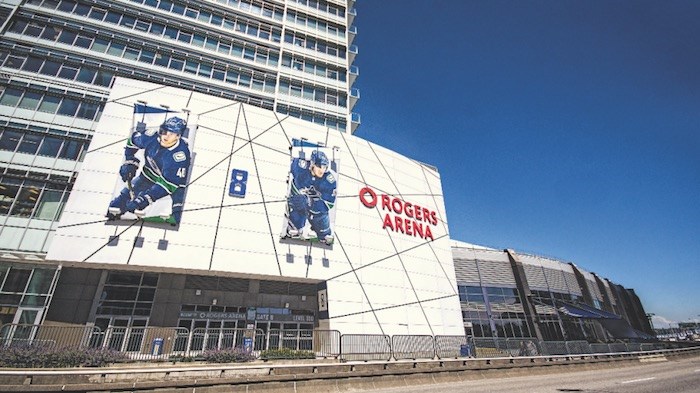 Rogers Arena in Vancouver. Photo by Chung Chow/Business In Vancouver

But all three clubs are now rolling out major “resurgence” business game plans that – officials hope – will reignite fan enthusiasm and, in turn, increase attendance. The Canucks – the biggest professional sports game in town – are using the team’s 50th anniversary and an emerging core of young, exciting players as a “perfect storm” scenario of combining an improved on-ice product with the lessons learned from four straight seasons out of the playoffs.

“I kind of feel like sometimes that we’re that band that has been practising in the garage for three to five years, and all of a sudden you get a hit record, and everybody says, ‘Whoa, look at what you’ve got there,’” said Canucks COO Trent Carroll of the business side of club operations.

“But for the last three to four years, we’ve been really focused on the fan experience and changed the way we do things, while the hockey has been working at the same time parallel to us.… So this year is important because it gives us the chance to put it all together. That’s what’s exciting for us, because it looks like the stars are aligning a bit.”

The Canucks have announced several major events for the 2019-20 season, including a week in February dedicated to the numbers retirement of longtime stalwarts Henrik and Daniel Sedin. 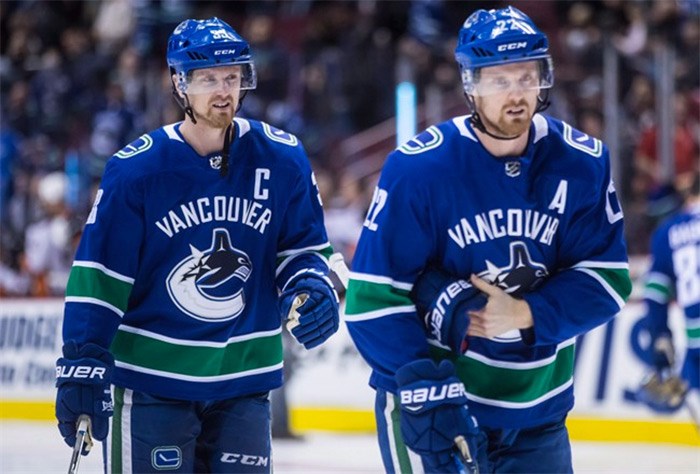 Vancouver Canucks’ Henrik Sedin, left, and his twin brother Daniel Sedin, both of Sweden, skate before an NHL hockey game against the Anaheim Ducks in Vancouver on March 27, 2018. Vancouver forwards Henrik and Daniel Sedin have announced this will be their last NHL season. THE CANADIAN PRESS/Darryl Dyck

Officials have said they pursued the NHL to bring the entry draft to Vancouver this year to bookend the launch of initiatives to drive fan interest into the 50th-anniversary season, and Carroll noted season ticket renewal rates this summer are “at the highest level in five years.”

Those numbers carry real financial weight, because the NHL – unlike its counterparts in the other major North American professional sport leagues – leans more heavily on gate receipts in lieu of bigger television revenue.

In the meantime, the team lost and did not replace a number of front-office executives, including former president Trevor Linden.

Canucks owner Francesco Aquilini said at a Greater Vancouver Board of Trade event ahead of the NHL draft that there are no current plans to add to the team’s executive ranks.

At the same event, Aquilini referred to the Canucks’ four-year post-season absence as “dark days,” but Carroll noted that the club learned some important lessons that will be applied this year in hopes of recapturing local sports market momentum.

“We’ve gone through a time, I would say, where we’ve learned more about how to address our fans’ needs and how to make the experience better … and it’s kind of our obsession now.”

Carroll pointed to the Canucks’ move to bring concessions in-house in 2014 and the team’s addition of Loge seats to Rogers Arena and opening SportsBar Live in 2016.

“It was out of necessity. Let’s be honest: the team was in a place where they had to regroup, so we weren’t performing on the ice as well as we wanted to. And we know that, when fans come into the building, the things we can impact [on the business side] was their experience. So it became part of our organizational DNA.”

The Canucks are not the only professional sports team that’s trying to reinvent the fan experience it provides for its fans as the off-field portion of the entire “fan-interest revitalization” package.

BC Lions president Rick LeLacheur has been hard at work since joining the Canadian Football League club in December 2017 to reverse a drop in attendance and season ticket renewals this decade – especially since the club won the Grey Cup in 2011.

Since that time, the Lions have won only a single playoff game – a Western semifinal against the Winnipeg Blue Bombers in 2016 – and average per-game attendance at BC Place has dropped from 30,366 in 2014 to 19,975 last season. 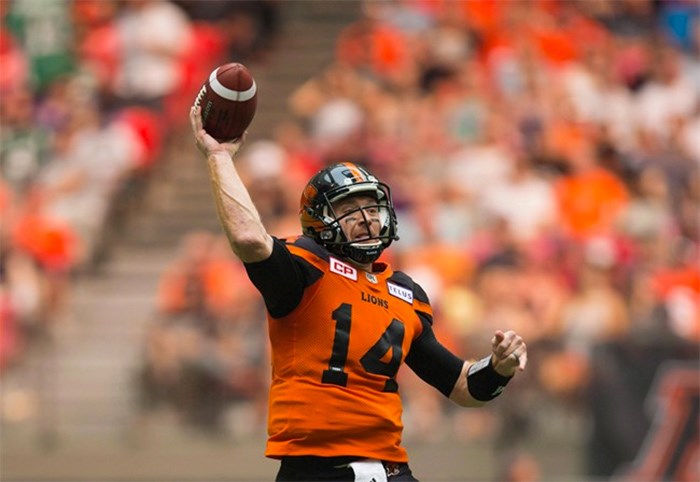 B.C. Lions’ quarterback Travis Lulay passes against the Saskatchewan Roughriders during the first half of a CFL football game in Vancouver on August 5, 2017. Quarterback Travis Lulay says he’s relieved to sign a one-year deal with the B.C. Lions but isn’t sure if he will have recovered from off-season knee surgery in time for the start of training camp. “To know the Lions value having me back, and I have an opportunity to play another year for the franchise… that’s a relief and an encouraging thing,” Lulay said in a telephone interview Monday. THE CANADIAN PRESS/Darryl Dyck

Part of the reason for the dropoff, LeLacheur said, is that the Lions hosted the Grey Cup again only three years after hosting its 2011 victory, which took much of the club’s manpower away from grassroots fan-base building to plan what is essentially a league-wide celebration that may have limited long-term leverage in building a local fan base.

“If you can put your finger on anything, I think hosting the Grey Cup in 2011 and again in 2014, there wasn’t much time between the two,” LeLacheur said. And as with the Canucks, there was an event like the 50th anniversary that sparked wholesale change after the season ended last year. Longtime coach (and former general manager) Wally Buono retired after 16 seasons with the club. A major Lions front-office overhaul that started with the hiring of Ed Hervey as general manager in 2018 followed Buono’s departure.

The Lions also made a number of high-profile free-agent signings this off-season, the biggest of which is the addition of 2015 Grey Cup MVP quarterback Mike Reilly. The key, LeLacheur said, was not only Reilly’s on-field pedigree, but also the quarterback’s ability to connect with the fan base as a member of the community – which is crucial for fostering long-term support.

“When we sat down to discuss our strategy at the end of last year, we wanted to put together a team on the field that can win and play exciting football – but the key players we go after could also have a positive effect on the community off the field with their personalities,” LeLacheur said. “We really believe that we have a role to play in the community, and do a lot of things like Purolator Tackle Hunger Night that shows our social commitment to the entire province.”

Signings like Reilly appeared to have sparked a strong initial impact – the Lions reported the team’s strongest season ticket renewals since 2012 after the deal – but the enthusiasm was countered by sobering numbers during the season opener on June 15, when the team drew 18,058 fans. That figure is down 10% from last year’s opener (20,182).

LeLacheur said the early-season schedule doesn’t help – the Lions have played one home game through the first four weeks of the season – and Vancouver’s summer weather and diversity of activities add to the challenge of drawing fans. But the goal, he added, remains making the playoffs – because one additional game of ticket revenue is significant for a league that, while generating $40 million per year in a TV deal with TSN, still depends heavily on gate receipts.

“I think last year, what we did was we prevented the decline of season ticket sales to that of a flat line, and this year we’ve seen a little bit of growth,” he said. “We anticipate this year we will see some growth in our individual-game ticket sales as the team gets better and hopefully starts winning, because in sports there’s nothing like winning to start drawing fans.”

When compared with the Canucks and the Lions, Whitecaps FC has had a relatively smoother existence in the past few years, benefiting from a new wave of uptake from younger fans for North American soccer. Since joining Major Leauge Soccer (MLS) in 2011, the club’s attendance per season has risen from 346,909 in the first year to 372,089 last year. The 2019 season opener allowed Whitecaps FC to open BC Place’s entire lower bowl for the second straight year, drawing just shy of 28,000 fans.

But the team isn’t without its challenges.

Last season’s 13-13-8 record drew some ire from fans and could have been more poorly received had it not been for the emergence of Canadian phenom Alphonso Davies, widely considered one of the country’s brightest soccer stars in a generation.

With Davies moving on to German soccer giant Bayern Munich in a $22 million transfer, Whitecaps FC were under significant pressure to spend the newfound funds to ensure the team does not disappoint its fans again.

Rachel Lewis, Whitecaps FC’s COO, noted the club’s biggest challenge is that professional soccer does not have as much player-development infrastructure as hockey and football. Therefore, a much larger part of Whitecaps FC’s resurgence focus needs to be placed on youth development.

“We are one of the biggest youth-development clubs in North America – certainly the biggest in Canada,” Lewis said. “We have 30 centres across the country, and our academy here in Vancouver. So seeing a player like Alphonso come through the system absolutely heightens the interest in our sport, attracting more young players to see soccer as a career and allowing us to showcase what youth development can do in terms of producing homegrown talent.”

She added that the team is also keenly interested in maintaining its unique brand image in the Vancouver sports scene, launching a series of pre-game outdoor “warmup parties” at the Plaza of Nations starting July 13. The events – held in partnership with Phillips Brewing & Malting Co. – is aimed squarely at casting the net as wide as possible by being free-access to all members of the public, ticket holders or not, five hours prior to game time.

Forbes estimated Whitecaps FC’s value at $150 million in 2017 with a modest revenue of $19 million. Annual losses sit at approximately $3 million, the report said – and the MLS as a whole remains in investment mode with many teams operating at a loss. But despite those realities, officials stressed that the focus for MLS and the Whitecaps has to remain on building the foundation of the business.

“I think there has been a couple of really big investments over the last couple of years by the club, which is really important to grow the sport and create an environment where we can grow,” Lewis said. “Ultimately, team values continue to grow, the product continues to grow, and that’s what’s important in the short term.… The investment in growing the business is critical.”