Should we sound the alarm on the slumping Canucks?

The falling feeling; fear I can’t go on And nobody will sound the alarm Saves the Day - “ Sound the Alarm ” Photograph By DAN TOULGOET / VANCOUVER COURIER Not that long ago, everyone was feeling pretty positive about the Vancouver Canucks.
Nov 30, 2017 3:17 PM By: V.I.A.

The falling feeling; fear I can’t go on

And nobody will sound the alarm

Saves the Day - “Sound the Alarm” 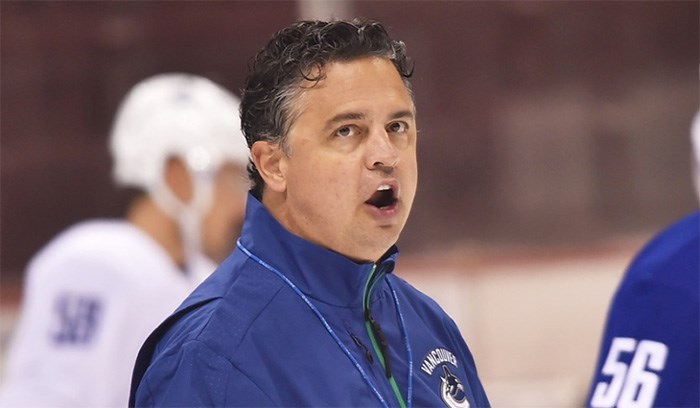 Not that long ago, everyone was feeling pretty positive about the Vancouver Canucks. Really, it was just one week ago, when the Canucks steamrolled the defending Stanley Cup champion Pittsburgh Penguins on the back of two goals by Brock Boeser and 43 saves by Anders Nilsson.

That win meant the Canucks opened up one of the toughest road trips of the season with two straight victories. It made it seem like the Canucks were transitioning from a mediocre, lucky-to-be-here team to perhaps a sneaky-good, borderline playoff team.

So of course the Canucks then rattled off three straight losses, which might have some fans concerned. Go back a few more days and things don’t look good for the Canucks: they’ve lost five of their last seven games and seven of their last ten. They’ve given up 35 goals in their last ten games, while scoring just 26. Ten of those 26 goals were scored in those two wins at the start of this road trip.

It’s not just the goals and wins: the Canucks’ possession game, once comfortably middle-of-the-pack, is sliding. Their corsi percentage over their last ten games is 47.1%, which is particularly troubling because they’ve been trailing for much of the time. Normally, teams that trail get more shots than their opposition, not fewer. 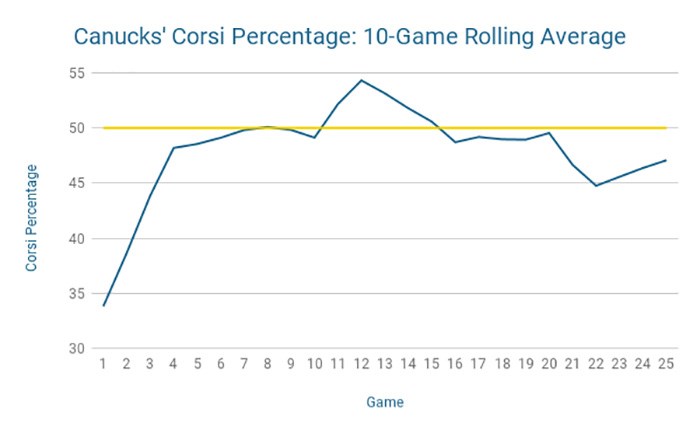 The Canucks are now just one win and four points ahead of the Edmonton Oilers in the Pacific Division. Fans are getting that falling feeling.

That’s a lot of reasons to be worried. So, should we be sounding the alarm on this team? Are they about to plummet down the standings? Could the Canucks be down with the Arizona Coyotes by the end of December?

It’s hard to say. The Canucks aren’t a great team — or even a good team — but they’re not outright terrible.

The worst of the Canucks recent losses was their latest, which saw them completely outclassed by the New York Islanders, a team that is, to be fair, doing that to pretty much everyone. A loss to the Islanders, even a bad one, isn’t quite the negative indicator it once was. The Islanders lead the NHL in goals-per-game for a reason.

This was also a tough road trip, against some strong teams and on an odd schedule, complete with an early game on Sunday in New York. They outplayed the Devils, only losing in a shootout after Jacob Markstrom gave up a soft goal. They also took the St. Louis Blues, the top team in the Western Conference, to overtime.

The return of Chris Tanev and Troy Stecher from injury should help as well, even if the Canucks have lost all three games since they came back. Given time, the Canucks defence should be a lot better with both of them in the lineup.

If you want to think positive, there are some reasons to do so. If the Canucks can win the final game of the road trip against the Nashville Predators, they’ll finish the road trip 3-2-1, which is pretty solid. And, with Derek Dorsett’s news fresh in their minds, they’ll have plenty of motivation as they hit the ice.

So yes, there are reasons for concern, but not enough to sound the alarm, flip the pool, or any other overt demonstrations of panic.

Read more Pass it to Bulis