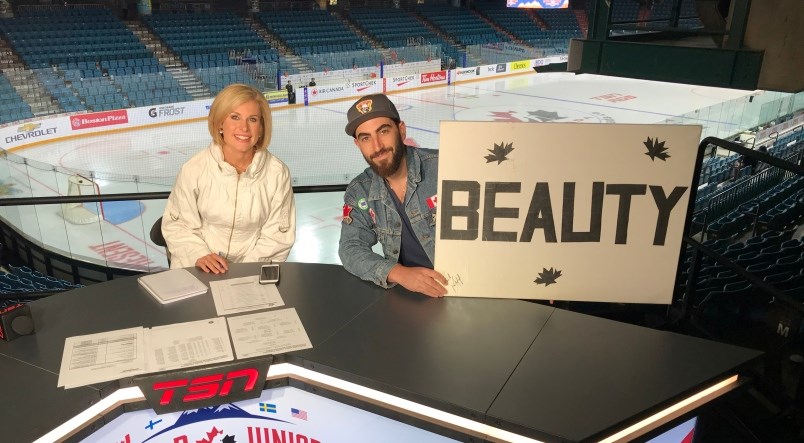 Jay Aikenhead and his signs are a fixture at Canucks games as well as the World Juniors. Photo courtesy of Jay Aikenhead

The Vancouver Canucks have a new MVP, and his name isn’t Hughes or Petterson.

He’s a beauty in a Canadian tuxedo named Jay Aikenhead. Last month, Aikenhead won the title of Canucks Fan MVP, and now he’s competing against other fans around the league for a chance to attend the Stanley Cup Finals.

Aikenhead is a diehard, born-and-raised Canucks fan who grew up blocks from the Pacific Coliseum. Some of his earliest memories are walking to the rink with his dad Ian to see the explosive Pavel Bure-era Canucks of the 1990s.

“Watching Hughes play has been a real treat this season,” Aikenhead raved. “The kid’s edges are some of the best in the league.”

If you’re a hockey fan, you may already know Aikenhead without realizing it. If you’ve been to a Canucks game lately and noticed a particularly large and rambunctious bunch of fans in the upper corner of the stands, waving around signs and giant head cutouts of various Canucks and chanting generally upbeat slogans, you’ll know that’s the Canucks’ organic fan section called the Larscheiders. They’re named after the Canucks’ passionate former radio and TV colour man Tommy Larscheid. The Larscheiders try to make the live Canucks experience more fun, and it’s working. This is the Larscheiders’ fourth year, and it’s become a very hot ticket just to be seated amongst them.

Aikenhead is usually right in the middle of the section, notable for his thick black beard, flat brimmed baseball cap and big smile.

“I’ve been involved with the Larscheiders since Day 1,” Aikenhead told me. “I create most of the visual material you see up in our section and help out with some of the Canucks’ game-day operations with regards to the Larscheiders. The thinking is that the game should be fun, where we all come together as a community to spread the passion for the team that brings us closer.”

Aikenhead’s positive approach to hockey fandom stretches back further than the Larscheiders. If you’ve watched Team Canada at the World Junior Hockey Championship over the last several years, you may have noticed a whole group of “beauties” dressed in double denim, their jean jackets covered in vintage hockey patches. They’re usually down by the glass, holding up bold and basic signage with Canadian-friendly words and phrases such as “BEAUTY,” “SORRY,” “TOQUE” and “2 BEER” neatly written out in capital letters. Yes, that’s Aikenhead and his hockey buddies.

“We wanted a specific look that we thought represented us personally as Canadian hockey fans,” said Aikenhead of the World Juniors experience. “The goal was to tease out Canadiana as best we could beyond just wearing a red or white jersey, and we thought of patching up some denim with hockey crests for the ultimate Canadian tuxedo.”

The tradition started in Malmo, Sweden, in 2014. It happened again in 2016 in Helsinki, and 2019 in Vancouver. At every tournament, Aikenhead and his crew received plenty of media exposure.

“Unfortunately, we missed out on this year’s tournament in Ostrava,” Aikenhead said. “But we are planning on going to Gothenburg in 2022 and potentially Novosibirsk in 2023.”

When he’s not cheering on the Canucks or Team Canada, Aikenhead is the director of hockey operations for East Vancouver Minor Hockey, the system he grew up playing in. My six-year-old son is in now in that system, and like the rest of the kids, he reveres “Coach Jay.”

For the past few months, Aikenhead has been involved in the fan contest, hosted by Upper Deck Hockey on Twitter. Aikenhead was crowned Canucks Fan MVP in February.

“With the privilege of being the Canucks Fan MVP, I get a printed hockey card with my picture on it,” Aikenhead mused. “Now I’m entered into the Ultimate MVP pool versus fans representing 22 other NHL teams.”

Voting for this stage of the contest is happening now until March 15. To vote for Aikenhead, all you have to do is like his tweet at @upperdeckhockey.

Many of you know this fan! He plays a major role in the community as the Director of Hockey Operation for his home association. He loves to reach out to the hockey community though his website “https://t.co/zZT9nvyS7z". @Canucks #UltimateMVP #MyMVP pic.twitter.com/3rlfqohJwy

He’s hoping your likes will take him right to the Stanley Cup Finals.

“I’m stoked at what I am getting as the Canucks MVP, but having the grand prize would be amazing.”

And how about that Canucks team he’s cheered so passionately for his entire life? What does the Fan MVP think of his squad’s chances of finally making the playoffs?

“It’s looking tight with the injuries we’ve sustained, but thanks to new players like J.T. Miller and Quinn Hughes, we have a good chance,” Aikenhead said. “The future is bright either way, and The Larscheiders are certainly excited to be in the building for meaningful games coming up.”

Aikenhead hopes that kind of positivity takes him, and his Canucks, all the way to the Stanley Cup Final.