The debut of the Canucks' retro skate jersey was so successful that fans immediately began campaigning to see it a little more often.
Dec 5, 2019 7:17 AM By: Daniel Wagner 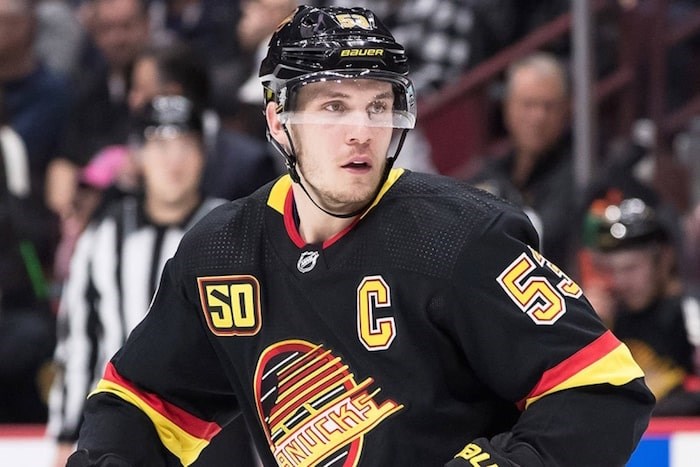 A few weeks back, the Canucks lost a Saturday game to the Colorado Avalanche, but they looked good doing it. It wasn’t just the thrilling last-minute comeback to force overtime; the Canucks looked sharp because of their jerseys.

That game was the debut of the Canucks’ retro 50th anniversary jersey, a throwback to the flying skate jersey they wore for much of the 90’s. The jersey won a fan vote over a year ago to be the team’s special retro jersey this season and fans were delighted to see it back on the ice.

The Canucks had to get special permission from the NHL to have a fourth jersey in their 50th anniversary season and only got approval to wear the black skate jersey on three nights: November 16th versus the Colorado Avalanche, January 4th versus the New York Rangers, and February 10th versus the Nashville Predators.

The debut of the jerseys on the 16th, however, was so successful that fans of the jersey immediately began campaigning to see it a little more often. Waiting two months to see the jersey again just seemed like too long.

Great reaction to the throwback uniform on Saturday, look forward to seeing it again Jan. 4 vs. @NYRangers. https://t.co/I1PYYoRiuA

Fortunately, fans of the flying skate won’t have to wait until January, as the Canucks have added one more game with the black jersey to their schedule. Appropriately, that game will be the 80’s theme night on Saturday, December 7th, where they will face their expansion cousins, the Buffalo Sabres.

The Sabres are an appropriate opponent for the black skate jersey, more so than the Predators, who didn’t even exist until 1998.

On 80’s night, the Canucks will wear their yellow flying-V jerseys for warm-ups before switching to the skate jersey. The flying-V was their jersey for the bulk of the 80’s, with the skate as a secondary logo on the shoulders. In 1985, however, they switched to the skate as their primary logo and, in 1989, introduced a jersey that is very similar in design to the 50th anniversary skate jersey.

That makes 80’s night an era-appropriate theme night to give the skate jersey another spin.

It should also be aesthetically pleasing because the current Sabres jerseys are not far off from the ones they wore in the 80’s, albeit with navy blue instead of royal blue. With the Canucks wearing black and the Sabres in white, it should be aesthetically pleasing, though it would be even better if they could be convinced to bring their gorgeous golden anniversary jerseys.

Getting one more game on the calendar for the skate jersey is a coup for the “Free the Skate” movement among Canucks fans. The next step? Campaigning for it to become the team’s official third jersey.

As an added bonus for flying skate fans, the Utica Comets will be wearing their own variation on the jersey for two games this season, as recently announced by the club.

The Comets will wear these specialty jerseys on February 29 and March 11. The jerseys will be auctioned off multiple ways following the March 11 game. pic.twitter.com/ETpCo7BTgD