VANCOUVER DAZE showcases and highlights the social life and scene of our beautiful city, covering all the misadventures and shenanigans at various cultural events, mixers, parties, meetups, and local happenings.
Rick Chung Jun 3, 2011 11:30 AM

We fiercely promote all the fun times the city has to offer along with the interesting people behind them.

You can pitch me HERE. 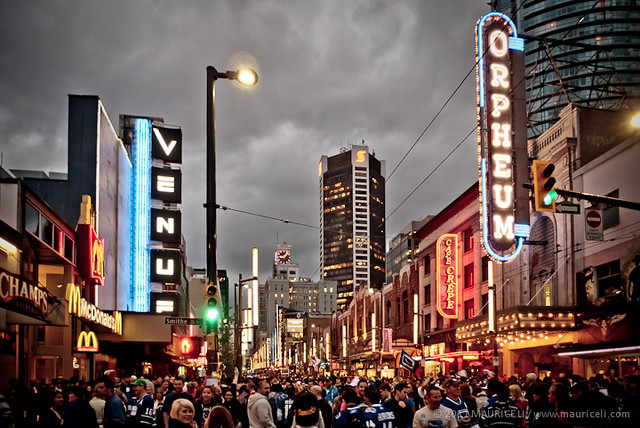 My social calendar has been super unpredictable with everyone scrambling to schedule events around the Canucks' magnificent Stanley Cup playoff run. Wednesday was Game 1 of the finals against the Boston Bruins and needless to say, the city was on fire. History will be made.

I really loved the CBC Hockey playoff montage video set to wonderful Adele's "Rolling into the Deep" (below), who had to cancel her performance here due to illness. I found it haunting and psyched me up for the big game.

Fans were everywhere milling about in their blue and green team colours cheering on the home team. The NHL has taken over running the games as I saw their temporary office everywhere along with NBC, ESPN, and many others.

I started off roaming the city early, a few hours before game time with many still at work. I was surprised by the number of jersey clad Vancourites just hanging out waiting for the game to start.

Downtown Vancouver and particularly Granville Street has become known as a celebration zone for fans to congregate after a win keeping in tradition from the Olympics. 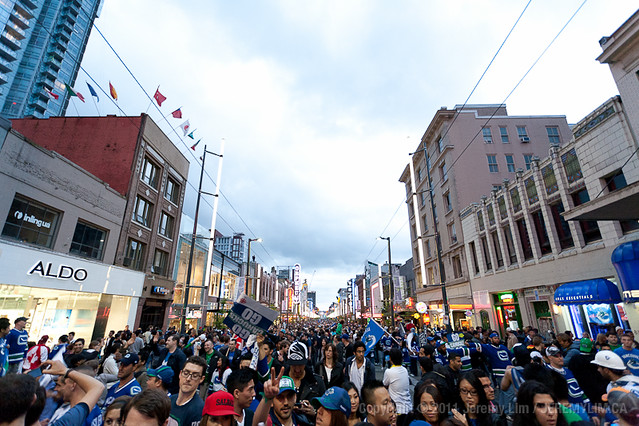 "Bite-gate" turned out to be nothing as Canucks' forward Alex "the third Sedin" Burrows was not fined or suspended  for allegedly biting down on Boston's Patrice Bergeron glove. It did remind me of Burrows' his great interview by Nardwuar below.

To say the city is abuzz with Canucks fever, is a massive understatement. Everywhere was a sea of blue jerseys and hockey gear as fans are embracing the team more than ever. 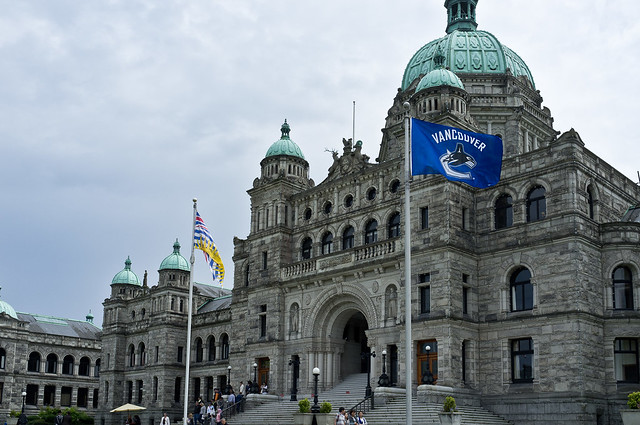 Things were off the hook with great hockey excitement and anticipation for hosting the Stanley Cup Final for the first time since 1994.

Check out my Canucks Molson Canadian buddies Peter Verge and "Street Pete" Henderson also roaming the streets of Vancouver during and leading up to Game 1 below.

Obviously, the good guys won a nail biter with Raffi Torres' heroic goal with 19 seconds left in the game thanks to an incredible play by my hero, Ryan Kesler, to stay onside. This was the reaction on Hamilton Street outside CBC Vancouver and the Vancouver Public Library after the game winner (below). 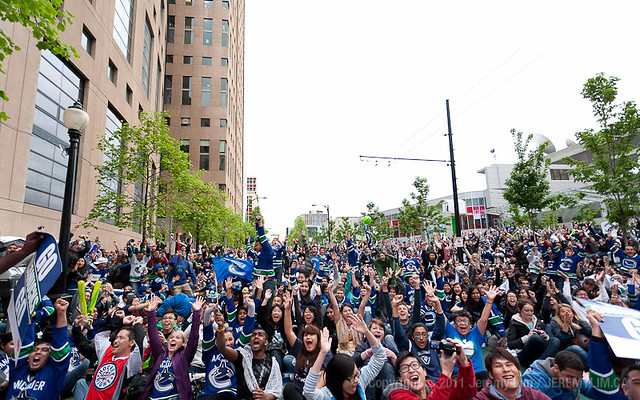 Chills. Anyways, I'll be off to Las Vegas for four days next week after tomorrow's Game 2. Expect a Las Vegas Daze next week detailing my shenanigans looking for Vancouver Canucks fans in Sin City to watch games 3 and 4 with at a sports bar on the strip. I'll be back in town for Game 5 (if necessary). Cheers. Go Canucks!