A co-owner of the Vancouver Whitecaps says he's been troubled for several weeks by decade-old allegations of abuse and harassment by a former coach with the club.
0
May 2, 2019 7:15 AM By: The Canadian Press

VANCOUVER — A co-owner of the Vancouver Whitecaps says he's been troubled for several weeks by decade-old allegations of abuse and harassment by a former coach with the club.

"We don't like it. We've been losing sleep, too," Jeff Mallett told reporters on Wednesday. "So I feel badly, especially for the women who've been impacted by this."

His comments came after the club released a letter, signed by Mallett and co-owner Greg Kerfoot, apologizing for pain and suffering experienced by women who were involved with the team around 2008.

More than a dozen women who played for the Whitecaps and were part of Canada's under-20 talent pool around 2008 have come forward to allege Bob Birarda, a former coach for both squads, acted inappropriately with members of the team.

The allegations include rubbing a player's thigh, sending players sexual text messages, making lewd comments and bullying young women who ignored or spoke out against his behaviour.

The Whitecaps issued a timeline of events on Wednesday, saying they first received a complaint in May 2008 and immediately hired an ombudswoman to review the situation. Based on her recommendations, the coach was given training "which explicitly outlined appropriate boundaries and behaviour."

Mallett — who was not with the team in 2008 — said the coach complied with the rules for the rest of the Whitecaps' season, but after the season ended, additional complaints were made to Canada Soccer.

The timeline says that both the Whitecaps and Canada Soccer "made the decision to no longer employ the coach" in October 2008.

The Whitecaps have also said the club recently contacted police in Vancouver to see if further action is required.

The organization will do an independent review of the actions taken in 2008 and make the results public.

"If the truth comes out and it's not what we thought it was, then we'll take action," Mallett said.

All of the allegations will also be reviewed, he added.

Asked whether changes need to be made to the club's front office, Mallett said he didn't anticipate any switch ups.

None of the women who've come forward with allegations have been approached by the club, Mallett said, but he added that he'd like to speak with them "as soon as possible."

"What I'd say to all the group is thank you for raising these issues. If there's information that wasn't made available before, please bring it forward," he said. "We believe that we made the right moves to get to this point but we're open to make adjustments if we need to."

Soccer fans in Vancouver have expressed their concern with the club's perceived inaction over the allegations on social media and with protests at two recent home games. 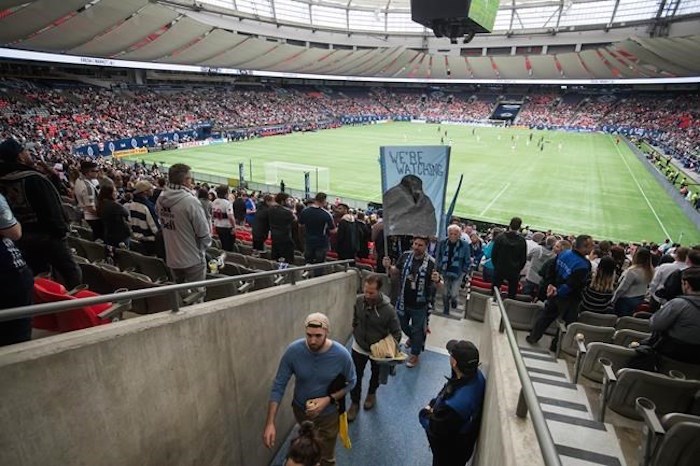 Vancouver Whitecaps fans leave their seats during an in-game walkout protest to show support for members of the 2008 women’s Whitecaps and under-20 Canadian national team who have alleged abuse by a former coach who ran both teams, as the Whitecaps play the Philadelphia Union during the first half of an MLS soccer match in Vancouver, on Saturday April 27, 2019. THE CANADIAN PRESS/Darryl Dyck

Many have raised questions about why no one from the team's front office had publicly spoken about the allegations since they were raised in a blog post in February.

Staff have long been working behind the scenes, Mallett said, going through old hard drives and emails, and reviewing old conversations to make sure everything was in order before an official apology was made.

The Whitecaps decided to come forward Wednesday because they wanted to show how much they care, he added.

"We are real people. We really care," he said. "We've put all these years and effort into (the club). This is our personal thing. And I'm taking it personal."

Mallett also asked fans to give the team a chance to regain their trust, and to give the review fair judgment when it's released.

The organization not only wants to make sure that what allegedly happened in 2008 doesn't happen again, but also wants to step up and become a leader in creating safe spaces in sport, Mallett added.

He said that as a father to two girls, the 2008 situation "didn't pass the dad test."

"At the end of the day, this isn't dollars and cents and jerseys and popcorn and all that stuff. This is people at the core of it. And this is what our club is all about," Mallett said.