Young Canucks Boeser and Virtanen, 20 and 21, offer hope for the future

VANCOUVER - Brock Boeser spent some nervous days in his hotel room, wondering if he had done enough in training camp and pre-season to stick with the Vancouver Canucks.
0
Oct 5, 2017 1:09 PM By: The Canadian Press

VANCOUVER - Brock Boeser spent some nervous days in his hotel room, wondering if he had done enough in training camp and pre-season to stick with the Vancouver Canucks.

Jake Virtanen only realized he made the team after seeing the hockey bag of the player he was battling for a spot packed and ready to be shipped off to the minors.

Boeser, 20, and Virtanen, 21, are both on the rebuilding Canucks' opening night roster, but it's only the first step in what the young wingers hope will be long a journey.

"Just because I made the team doesn't mean I'm going to stay here," said Boeser. "I've got to keep coming to practice and working my hardest and making the most of my opportunities during games."

"This is where the real work begins," added Virtanen.

The paths Boeser and Virtanen took to get to this point began in similar fashions before veering in vastly different directions.

The 23rd pick at the 2015 draft, it seemed like Boeser could do no wrong when he signed with the Canucks at the end of last season following his second year at the University of North Dakota. With great vision and a deadly release, the Burnsville, Minn., native scored four goals in his first nine NHL games, giving Vancouver fans and management hope at the end of a miserable campaign. 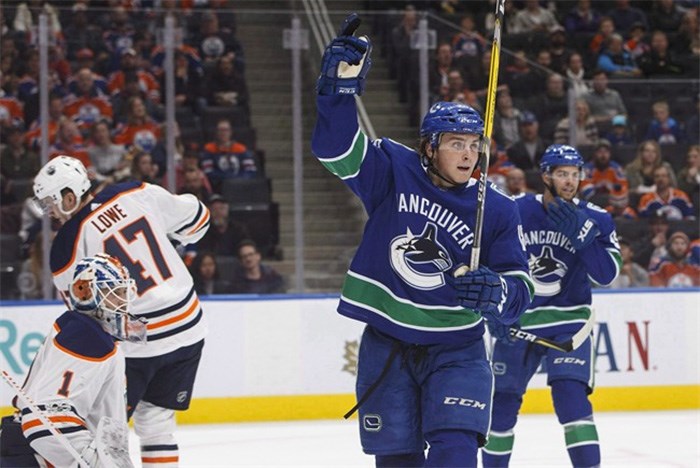 Vancouver Canucks’ Jake Virtanen (18) celebrates a goal on Edmonton Oilers’ goalie Laurent Brossoit (1) during first period pre-season NHL action in Edmonton, Alta., on Friday September 22, 2017. Brock Boeser spent some nervous days in his hotel room, wondering if he had done enough in training camp and pre-season to stick with the Vancouver Canucks. Virtanen only realized he made the team after seeing the hockey bag of the player he was battling for a spot packed and ready to be shipped off to the minors. THE CANADIAN PRESS/Jason Franson

Boeser followed that up with a strong September where he registered four goals and three assists in five outings, and despite tailing off a bit towards the end of the pre-season schedule, seemed like an early lock to make the offensively starved Canucks.

"Brock making the team wasn't about how many goals he scored," said Vancouver head coach Travis Green. "The way the game is played today, it's detailed, but we want to play an offensive game.

"We know that's an area in our game where we have to be better."

For his part, Boeser said he won't be putting any extra pressure on himself to score for a team coming off a franchise-low 178 goals, but added that his performance last spring made him realize he has the ability to fill a role as a top-six forward.

"I surprised myself a little bit," said Boeser. "But that just gives me confidence for this year knowing I can play with these guys."

Virtanen, meanwhile, was the sixth overall pick in 2014 and came to Vancouver the next season with much fanfare thanks to his offensive potential, physical style, and the fact he grew up idolizing the Canucks in nearby Abbotsford, B.C.

He had a decent showing as a 19-year-old rookie with 13 points (seven goals, six assists) in 55 games. However, Virtanen was banished to the AHL's Utica Comets last November after registering a single assist over an uninspired first month of the season, a move aimed at helping him find his game and get in better shape.

While his numbers weren't great in Utica, Green — the Comets' coach before getting promoted to the Canucks' top job in April — got through to Virtanen, who was drafted ahead of the likes of Toronto's William Nylander, Winnipeg's Nikolaj Ehlers, Detroit's Dylan Larkin and Boston's David Pastrnak.

Virtanen is considerably leaner than the 229 pounds he was listed at last season, has a greater attention to detail on the ice, and seems to have rediscovered his scoring touch, finishing the pre-season with four goals and two assists in six games as the club took a long look before deciding he deserved a checking role ahead of Darren Archibald.

"Now it's my spot to lose," said Virtanen, who like Boeser wouldn't require waivers to be sent to Utica. "(Green) talked to me about being hard to play against. I've got to go out there and be that kind of guy."

A veteran of 14 NHL seasons as a player, Green said his time in the league included some early struggles and that probably helped him get Virtanen's attention last year.

"A lot of guys that have played long enough, they've gone through a lot of different scenarios, a lot of different things," said Green, who will make his NHL coaching debut Saturday when Vancouver hosts Edmonton. "I still remember going through a draft and thinking you're ready to play when maybe you're not.

"Looking back, knowing what's the best thing for you, you might not have felt like that then."

One thing Virtanen knows for sure is both he and Boeser have a long way to go before either will feel their roster spots are secure.

"It gets harder from here," he said. "You've really got to show what you have to bring to the table.