Braving the storm at the 25th Apple Festival

On October 15 and 16, two major events collided in a spectacular display of nature versus human ingenuity: the first, a storm fuelled by Typhoon Songda, hit the southern BC coast and battered spots of Vancouver Island, Howe Sound, and the Lower Mainl
UBC Botanical Garden Oct 27, 2016 8:57 PM

On October 15 and 16, two major events collided in a spectacular display of nature versus human ingenuity: the first, a storm fuelled by Typhoon Songda, hit the southern BC coast and battered spots of Vancouver Island, Howe Sound, and the Lower Mainland with winds of over 90km/h and up to 240mm of rain. But the second, just like its titular fruit, survived and thrived despite the wind and rain, soaking up the weather and turning out as delicious as ever.

Early Saturday morning, with the threat of a historic storm on the horizon (literally!), a small army of over 300 volunteers woke up before the sun rose and marched out to the southwest corner of Point Grey in order to man the 25th annual Apple Festival, assuming their positions in everything from cash registers to transportation (golf carts!). Planned months ahead by the Friends of the Garden, a group of dedicated volunteers who are the backbone of many UBC Botanical Garden events throughout the year, the Festival’s final preparations had been underway for days, from bagging 36,000 pounds of apples in the cold (gloves required!) to mounting tents. 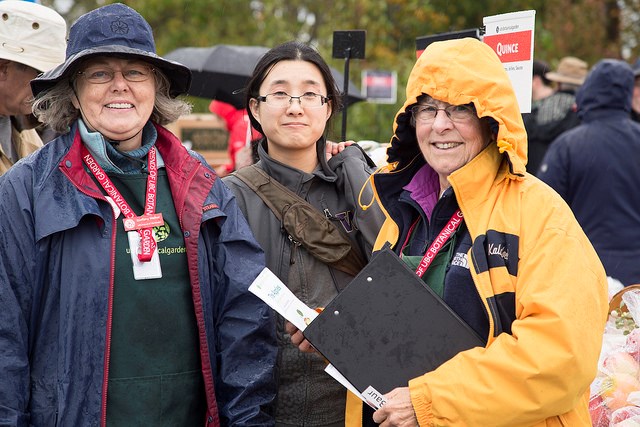 As 11am drew near, the rain came down as expected, but there was already a long line forming at the entrance. From the moment doors opened until 4pm, thousands of people under an array of umbrellas and rain coats streamed through the gates, leaving with cartload after cartload of fresh apples. Some of the most popular varieties included Cox’s Orange Pippin, Bramley’s Seedling, and Golden Russet, with the former two selling out on the first day. While volunteers worked tirelessly to ensure the smooth sailing of the festival, 36 different performers entertained crowds as they bought apples, discovered new varieties at the Tasting Tent, sampled and bought all the delicious goodies from over 100 vendors, took photos with the scarecrows, and indulged in the beauty of the garden. 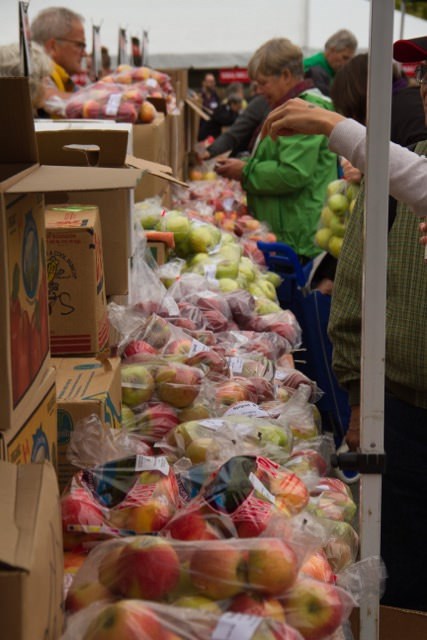 Even though not all went as planned, volunteers and staff found a way to improvise. Rain intent on ruining maps and signs meant fashioning makeshift plastic covers. The leaf pile required an overnight tarp, but was every bit as enjoyed as in years past by little ones, despite it being soaking wet. And at the end of the first day of the festival, the wind was so strong that it was pushing empty apple crates off tables and threatening to undo the wrappings in place to secure unsold apples. But the Friends of the Garden; volunteers and staff from: City Farmer, West Point Grey Girl Guides, Kinderbooks, Luminous Elephant, Stanley Park Ecology Society, WildResearch, Catching the Spirit, UBC Farm, UBC Sustainability Zero Waste and the UBC BG Horticulture Training Program; and UBC Botanical Garden staff persevered, and everyone learned that not even a large-scale storm system can dampen the UBC Apple Festival (although it might get you quite wet). 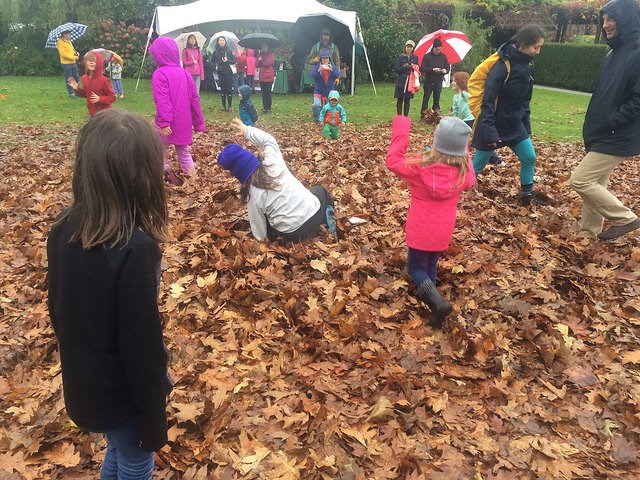