Restrictions to loosen Tuesday amid falling COVID-19 cases, increase in vaccinations
Jun 14, 2021 10:48 AM By: Tyler Orton 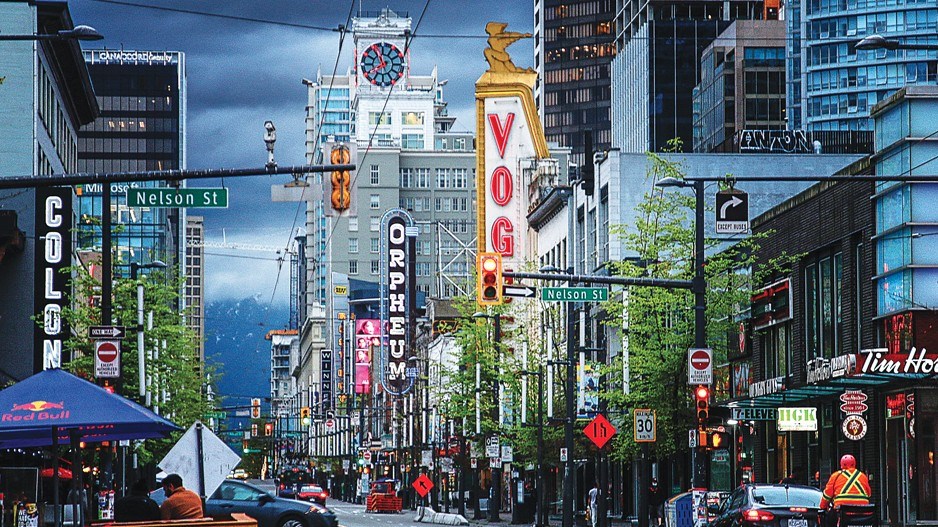 Bars along the Granville strip will be permitted to serve alcohol until midnight as the province enters Stage 2 of its reopening plan, effective June 15Rob Kruyt, BIV

Liquor will pour in restaurants until midnight, cinema projectors will roll once more and recreational travel throughout all corners of B.C. will resume.

The provincial government confirmed Monday that B.C. is transitioning to the second stage of its reopening plan, effective Tuesday — the earliest date possible.

“Case counts are declining, hospitalizations are stabilizing and [vaccinations] are climbing at a positive rate,” B.C. Premier John Horgan said.

While travel restrictions within the province are loosening, the province is advising against non-essential travel from other provinces.

“As we open up we must be respectful to people and communities with different comfort levels and different risk levels,” B.C. provincial health officer Dr. Bonnie Henry said.

She said it’s possible that existing provincial health orders can be rescinded in the coming months and replaced by recommendations as officials review COVID-19 case data.

And people can invite either up to five others or one other household into their homes, high-intensity indoor fitness classes can resume at reduced capacity and indoor team games will be allowed — but without spectators.

Spectators will be allowed to gather for outdoor sports, as long as the gathering does not exceed 50 people. Masks will still be required for indoor public spaces.

Almost immediately after the province confirmed it was transitioning to Stage 2, the TD Vancouver International Jazz Festival said it would be hosting small indoor events ranging between audiences of 25 and 40 people at two of its venues between June 25 and July 4.

But for the most part, the jazz festival will be delivering digital content to ticket-buyers as shows are streamed live.

Tourism and Culture Minister Melanie Mark is urging British Columbians to consider planning weeklong trips with the province to help support local operators that have been hit hard by restrictions over the past year-plus.

Transitioning to Stage 2 of the province’s four-stage plan, unveiled late last month, was dependent on at least 65% of adults in the province getting jabbed with their first COVID-19 vaccine dose as well as a continued decline in cases and hospitalizations.

Such benchmarks were quickly achieved in the three weeks since provincial officials outlined the reopening plans.

As of Friday, 75.1% of adults in B.C. and 73.1% of those 12 and older have received at least one vaccine dose. Meanwhile, both active cases and hospitalizations have been halved since late May.

“We will continue to monitor through the next incubation period before moving to the next stage,” Henry said.

But Health Minister Adrian Dix said last week British Columbians should not expect the government to accelerate plans for Stage 3 of the reopening despite clear signs the province is exceeding benchmarks.

He said at the time that sticking to the previously determined dates — July 1 is the earliest possible date the province could transition to Stage 3 — would make residents more confident about the government’s plan.

Meanwhile, theatre chains were already scheduling screenings this week of new releases prior to any confirmation from the province that they would be allowed to reopen.

Jeff Guignard, executive director of the Alliance of Beverage Licensees BC (ABLE BC), told BIV last month the extension of liquor-serving hours beyond 10 p.m. is significant for the industry since 30-60% of liquor sales come after that hour depending on the establishment.

“Little things like that it can be a massive difference for industry,” Guignard said, adding nightclubs likely wouldn’t be doing much business anyway if alcohol sales ceased at 10 p.m.

The reopening of nightclubs is not on the table until at least July 1 with the potential arrival of Stage 3.

Despite B.C. transitioning to Stage 2, the state of the province’s cruise industry remains in a precarious position with international borders still restricted and cruise ships banned from docking in Canada until February 2022.

The U.S. is currently allowing foreign-flagged ships to travel direct between American ports, meaning cruise ships are no longer required to dock in Vancouver or Victoria while en route to Alaska.

But those temporary provisions could potentially become permanent after Utah Sen. Bill Lee tabled legislation that would allow these ships to bypass Canada.

Horgan said his staff is working with federal officials about plans for loosening restrictions at the border.