Photograph By KELVIN GAWLEY The City of Burnaby is hoping a B.C. Supreme Court judge will give it the power to forcibly evict an encampment of pipeline protesters.
Jul 26, 2018 1:02 PM By: Kelvin Gawley 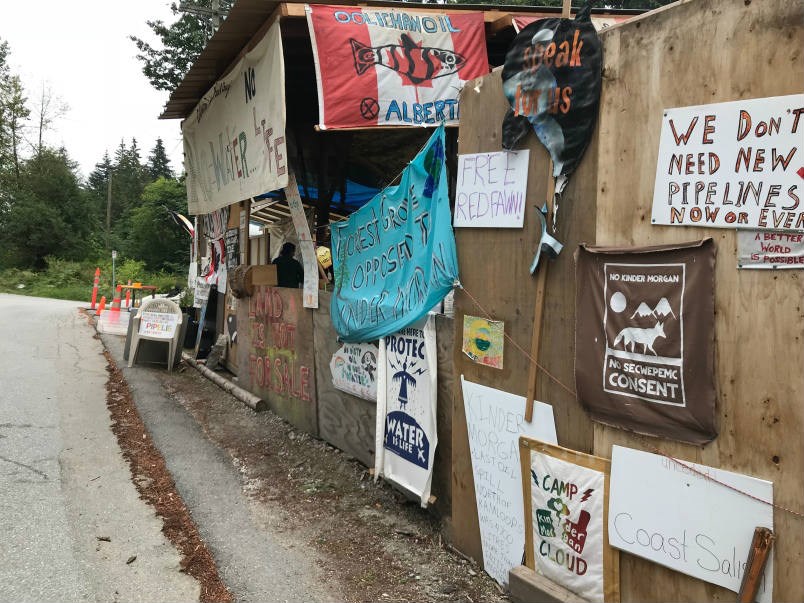 The City of Burnaby is hoping a B.C. Supreme Court judge will give it the power to forcibly evict an encampment of pipeline protesters.

The city issued a 72-hour eviction notice on Wednesday, June 18 to members of Camp Cloud on Shellmont Street near the entrance to the Trans Mountain pipeline tank farm on Burnaby Mountain. The notice demanded campers remove their trailers, tents, shower and carver’s cabin, as well as snuff out a ceremonial fire – all of which, the city says, are violating bylaws and endangering area residents.

But the Saturday morning deadline came and went without incident.

The camp remains, with protesters vowing to stand their ground.

City manager Lambert Chu said the eviction notice was issued to give campers the opportunity to pack up without conflict.

“We wanted to extend that courtesy to them without taking action one way or the other,” he said.

Chu scheduled a meeting with camp leaders for Monday, but he said the protesters wanted to change the location from Burnaby City Hall to downtown Vancouver at the last minute, “which was very strange,” he said.

“We're in Burnaby, the protest site is in Burnaby, I think it would be much more convenient to meet in Burnaby.”

Chu said he offered to meet at another City of Burnaby property away from city hall.

“We're more than prepared to listen to them,” he said.

But, he said, the city now has no option but to seek a court order to enforce the eviction notice. On Thursday morning he said the city was filing a notice of civil claim in B.C. Supreme Court to apply for such a order.

“We have gone through all the steps,” he said “Despite our numerous tries [and] numerous notices given to the camp occupants, we have not seen any positive response. On the contrary, the cooperation from Camp Cloud occupants has been somewhat lacking, and we find that our interactions with them have been challenging at best.”

Chu said he anticipates the city to get a hearing sometime around Aug. 10.

Reached by phone on Thursday, Boutwell said she was not immediately available to comment.

The City of Burnaby will seek a court order to enforce its eviction notice given to #TransMountain protesters at Camp Cloud. #bcpoli #vanpoli #cdnpoli pic.twitter.com/0G5XZBSlIY