Did someone find Canuck the Crow's dead body or is it a hoax?

Rumours are beginning to spread that Canuck the Crow – Vancouver’s unofficial winged ambassador — has been found dead, but many fans believe it is a hoax.
Elisia Seeber Oct 8, 2019 3:44 PM

Rumours are beginning to spread that Canuck the Crow – Vancouver’s unofficial winged ambassador — has been found dead.

It has been over a month since the bird, famous for his mischievous and lively character, has been seen in the East Vancouver area he usually frequents. This weekend, an anonymous person posted to Craigslist that they had found and disposed of a crow matching Canuck’s description.

The post, titled ‘Why would a crow have two bands?’, has since been taken down, but greatly upset fans on the Canuck and I Facebook page that don’t believe it to be true.

The person who wrote the post claimed they were initially curious as to why a crow would have two bands and they were later informed about Canuck’s disappearance.

“Someone has just emailed me and informed me about Canuck. I am regretfully sorry that the crow I found was Canuck from the pictures I just saw online.

“Had I known at the time about Canuck I would have taken photos, even in the state he was in, to give closure. I am truly sorry I’ve taken that away from all of those who loved him. I am so sorry but I disposed of his body. That’s all I want to say as to not further hurt those who loved him.”

Earlier this year, Canuck became the first crow to be banded in North America for non-endangered and non-research purposes. Canuck sports a uniquely numbered metal band, supplied by The Federal Bird Banding Office in Ottawa, along with his orange band that makes him visible to his fans.

The Craiglist post was later updated with photos of a dead crow, which the person said they got from their coworkers. 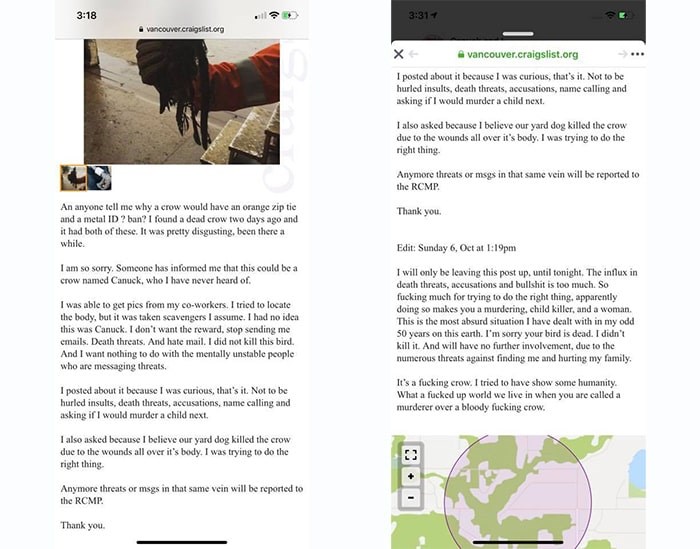 In the updated post they wrote that they believed their yard dog killed the crow and they were just trying to do the right thing by letting people know.

The person went on to write that they would be taking the post down because they had received numerous “death threats and accusations.”

“This is the most absurd situation I have dealt with in my odd 50 years on this earth,” the Craigslist post stated on Oct. 6.

However, Shawn Bergman, who is widely known as Canuck’s human best friend and runs the Canuck and I Facebook fan page, told Vancouver Is Awesome he believed the Craigslist post was a “hoax.”

Speaking to V.I.A on Tuesday, Bergman said he had tried to contact the person who put up the information about Canuck six times and he was yet to receive a response.

“It’s all turned out to be false,” Bergman said.

“Somebody said they had found a body and then they put up some fake photos and later retracted and said they [the photos] had just been used as an example.

“There’s just a lot that doesn’t seem to add up, especially with no contact from this person. So we are looking at it as being a hoax.”

He said during the past month he had received at least five emails from people claiming Canuck is dead, but there had been no evidence to back it up.

“I don’t believe he is dead and I probably will never think he’s dead until I see a body,” Bergman said.

Despite Canuck not being seen since August 30, Bergman is continuing the search. 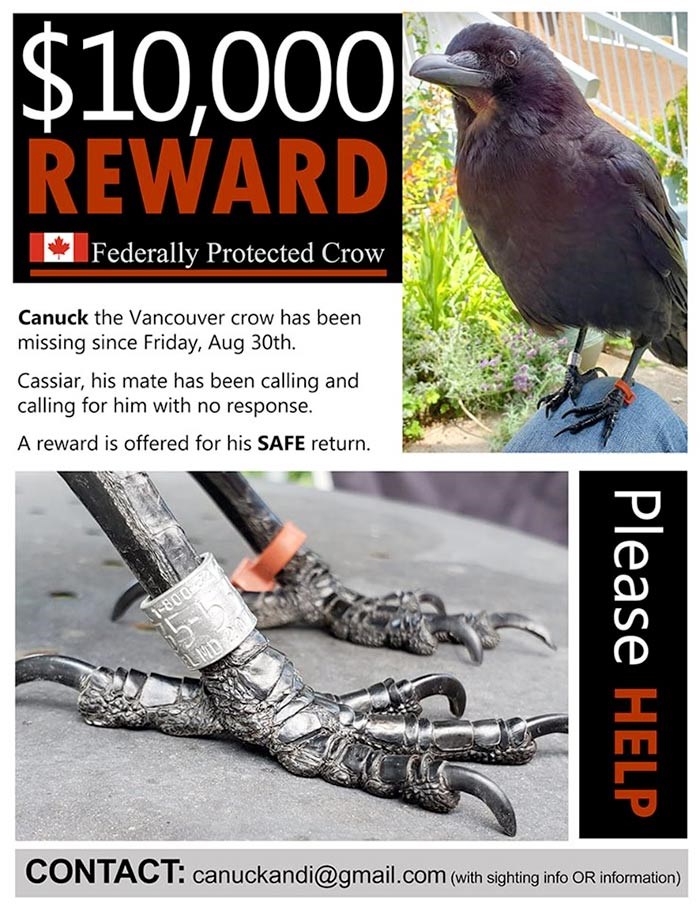 He said at this stage, people just wanted to know what happened to Canuck.

Anyone who sees or has information on Canuck can contact Bergman via email: canuckandi@gmail.com.