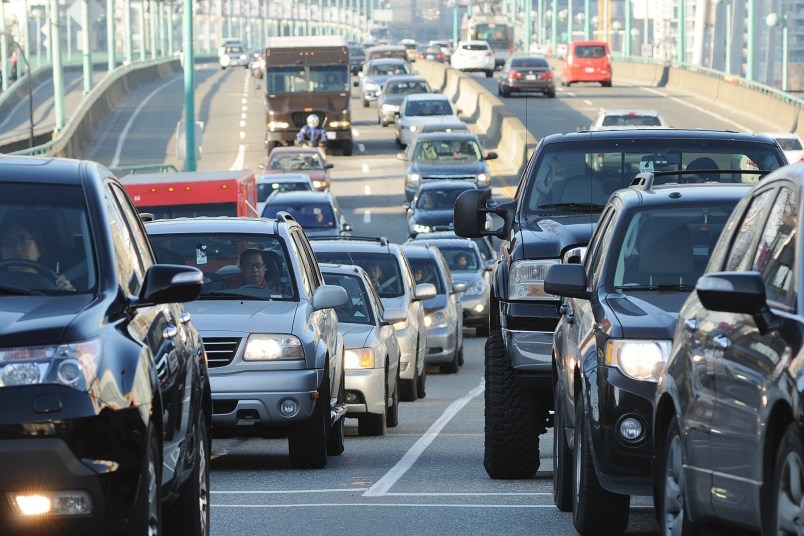 City council will reconvene Nov. 17 to hear from more speakers before it decides whether to approve a $500-million climate action plan. File photo Dan Toulgoet
Vancouver city council heard Thursday from young environmentalists, doctors, film industry leaders and those who retrofit buildings to make them energy efficient that it should adopt a $500-million plan to fight climate change.

The supporters, including 14-year-old Anica Lee, were among more than 70 people registered to speak to council on a day that ended with council forced to reconvene the meeting Nov. 17 to hear from the remainder of speakers before voting on staff’s plan.

“I need to know that this work I’m doing is impactful — that this work so many of us have been doing will not go to waste,” said Lee, an organizer with youth climate change crusaders Sustainabiliteens.

“I’m asking you to vote for the climate emergency action plan so that I can dream about a future instead of being constantly worried about it, and so that thousands of Vancouverites can count on a safe future, too.”

The 371-page plan calls for a wide range of policies and fees to reduce carbon pollution in buildings, construction materials and discourage the use of automobiles while at the same time improve infrastructure for walking, cycling and transit and create more “green” jobs.

Staff have described the plan as a “road map,” with more details and consultation to come as each component of the plan is rolled out year after year, with the most controversial aspect — transport pricing — not envisioned until 2025.

If implemented, the plan will cost taxpayers $500 million over five years and require investments from business owners and residents estimated at $1.3 billion over the next 10 years on such things as heat pumps and electric vehicles.

Matt Horne, the city’s climate change policy manager, told council in a presentation Tuesday that long-term savings from the investments would be $2.2 billion, and lead to positive behavioural changes on how people live and get around the city.

It’s that long-term gain that Dr. Rashmi Chadha mentioned in addressing council, which has received pushback from some business improvement associations and the Canadian Taxpayers Federation over transport pricing, which would see drivers charged each time they enter the downtown core.

“My hope is that if you vote to move forward with the climate plan, we will have a healthier, less air-polluted community, which is a better place to live for all who work and play here,” she said. “There will be detractors who criticize the plan for many reasons. Asking people to make sacrifices for the greater good has never been an easy thing.”

Council also heard from Dr. Michael Schwandt of Vancouver Coastal Health and retired physician, Marianne Rev, who support the plan and emphasized its health benefits and the roles cities must play in the worldwide fight against climate change.

Brad White, president of SES Consulting, focused his support for the plan on the recommendation to retrofit buildings. His company has completed that type of work on Vancouver buildings, including the Vancity tower across from Science World on Quebec Street.

White’s company installed a heat pump to recover heat from the credit union’s data centre to heat most of the remainder of the building. The retrofit reduced the natural gas consumption by 96 per cent and the building’s greenhouse gas emissions by 71 per cent.

“I should add this is an investment that paid back in just six years,” White said. “In our experience, the average commercial building in Vancouver can easily achieve between a 10 and 30 per cent reduction in emissions, while delivering a very positive financial return to the building owner.”

Clara George, the vice-president of studio and sustainable production services for Sim, is working to cut pollution in the film industry. George, who spoke to council with Pete Mitchell, president of Vancouver Film studios, said she believed the plan would help accelerate the industry’s transition to clean power.

“The demand for sustainable solutions is coming from actors, studio heads, worldwide organizations and importantly from our communities, our businesses and the tens of thousands of Vancouverites that work in this industry,” she said.

“We are all looking for a cleaner way to make film and television, and the world is looking to Vancouver to see how it will happen.”

Critics of the transport pricing scheme

Charles Gauthier, president and CEO of the Downtown Vancouver Business Improvement Association, was among the few detractors of the plan to speak to council Thursday.

Gauthier has been critical in the media of the plan’s transport pricing scheme and not being consulted about it. He reiterated those concerns and emphasized how businesses were already hurting from the pandemic’s effect on the economy.

“We’re being asked to support something where we have no details, which I think is ludicrous,” he said. “This has caught us off guard and I think it would be better to bring us along in the process rather than putting us at a disadvantage, if it’s already been approved in concept. Because I don’t think we can stop it after that.”

Since April, he said, 53 street level businesses closed permanently in the association’s district and downtown office vacancy rates in the third quarter of this year rose to 5.2 per cent from 2.1 per cent in the first quarter.

City staff has proposed transport pricing be run as an experiment in Vancouver before it would expand across the region — a point Gauthier seized on in answering a question from Coun. Sarah Kirby-Yung about the plan.

“If Vancouver is going it alone, there is no guarantee that you’re going to get regional cooperation on this, and it just doesn’t create a level playing field,” he said, noting the need to examine a regional approach to transport pricing.