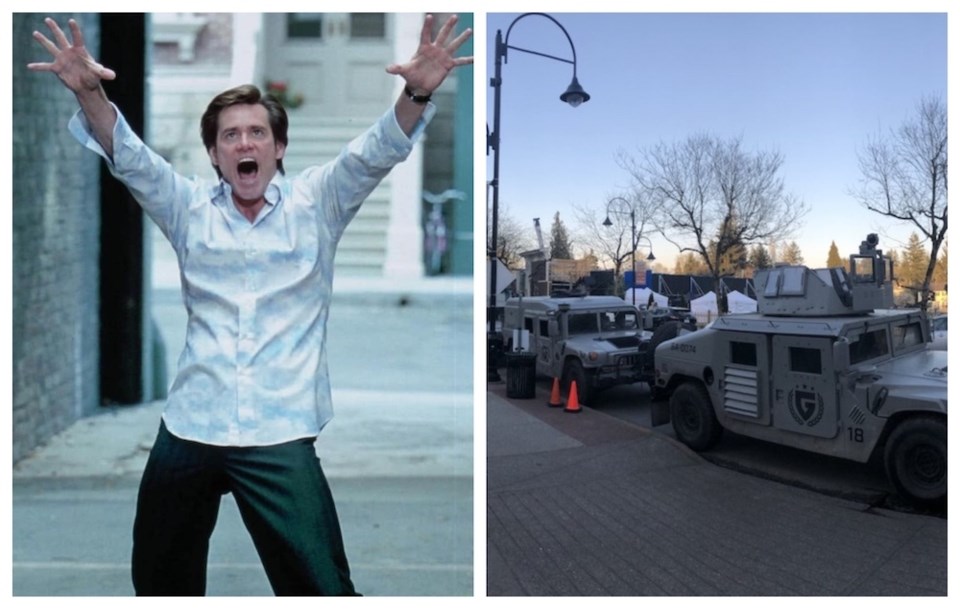 Locals are sharing more photos from the set of Sonic the Hedgehog 2 that is currently filming in Metro Vancouver and stars Jim Carrey. Photo via jimcarrey_offical / Instagram and courtesy Katia Stano

Locals are sharing more photos from the set of Sonic the Hedgehog 2 that is currently filming in Metro Vancouver and stars Jim Carrey.

The Canada-born actor was filming in Fort Langley earlier this week, and a couple of people have mentioned on social media that they spotted him.

Fans shared several photos from the set over the past week. Katia Stano told Vancouver Is Awesome that the film set has taken over Fort Langley's Glover Road. She added that it "looks like a military invasion with helicopter and tanks included!"

Now, several other people have shared recent images and videos of the completely transformed village community.

Blue screens have taken over @fortlangley for the filming of Sonic the Hedgehog 2! Where’s Jim Carey at 👀 @WhatsFilming @yvrshoots pic.twitter.com/6cZ3kGZ8as

Some more pictures of the set for Sonic 2, from Fort Langley. @WhatsFilming @yvrshoots #SonicMovie2 pic.twitter.com/0rrlbjw4Xx

So I went Fort Langley and saw that they were filming the Sonic The Hedgehog 2 film there. It was cool seeing the plane in person. I wish I could have seen @JimCarrey but oh well, it was cool either way pic.twitter.com/XvT4vguyTB