The two planes were returning to Cold Lake Alberta from Comox yesterday at around 2 p.m.
Apr 28, 2021 8:48 AM By: Cameron Thomson 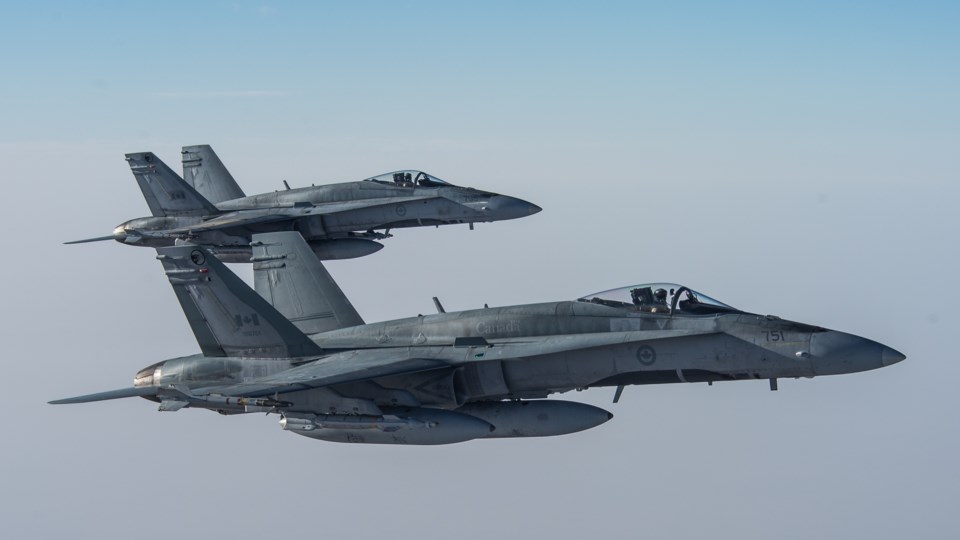 Two CF-18 Hornets prepare to resume their activities after being refueled by a CC-150 Polaris during Operation IMPACT on February 4, 2015.Canadian Forces Combat Camera, DND

Many in the Lower Mainland yesterday heard the roar of two twin-turbine fighter planes ripping through Vancouver airspace as they conducted a training exercise.

According to an email from Maj Trevor Reid, a public affairs officer with the Royal Canadian Airforce the two CF-18 Hornets were coming from the Comox air force base where the aircraft had just completed regular NORAD readiness training. When the planes were set to return to their home base in Cold Lake, Alberta they conducted some airborne testing of radios at around 2 p.m. over Vancouver to support the Canadian Air Defence Sector.

Anyone spot the noisy jet over Vancouver right now? @NEWS1130 @VIAwesome @Transport_gc We heard it, but couldn’t see it....

“The aircraft followed all speed and altitude restrictions as provided by local air traffic control.  These activities ensure members of the Canadian NORAD region are ready to respond to threats and emergencies at any time,” Reid said.

With a cruising speed of 1,060 kilometres per hour, the trip from Vancouver to Cold Lake might have taken the fighters just 30 minutes. Capable of traveling nearly twice the speed of sound, the plane’s engines have been known to produce up to 118 Decibels, that’s like hearing a rock concert flying through the air.

Reddit user Forceburn recounted hearing the jets in a thread trying to figure out where the sound had come from.

“I live in East Van, and I've never heard of a plane so loud. Not even when I'm in Richmond. Seriously thought a plane was gonna crash down onto our house,” they said.

For others, it brought up memories of, and a longing for, the Abbotsford Airshow which was cancelled last year due to the coronavirus (COVID-19) pandemic.

You can view the International Space Station from Vancouver tonight
Mar 30, 2021 1:01 PM
Comments