Saturday's climate demonstration at Granville and Georgia streets marked the first of several Extinction Rebellion events expected to take place across Vancouver in the coming days.
May 1, 2021 9:23 PM By: Megan Lalonde 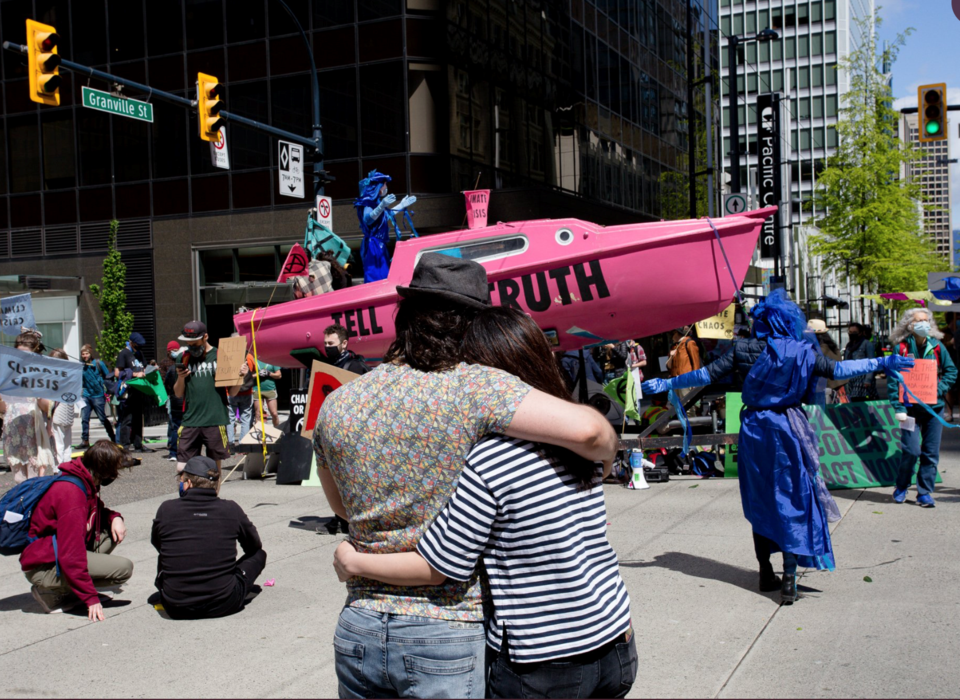 Vancouver police arrested five climate demonstrators on Saturday, May 1 after the individuals refused to leave a boat that was blocking the Granville and Georgia intersection. Twitter, @XRVancouverBC

In total, five adults ranging in age from 22 to 65 refused to leave and were arrested for mischief and intimidation to block a roadway, "after hours of attempted negotiation," police said in a news release issued May 1.

“At its peak, a group of 150 people blocked the intersection of Granville and Georgia Streets while surrounding a [15-foot boat] boat,” said VPD Const. Tania Visintin.

"Protestors blocked traffic in all directions and caused major traffic disruptions," she added.

Organized by Extinction Rebellion's Vancouver chapter, the demonstration was intended to be a nonviolent display of civil disobedience calling for action in the face of a worsening climate emergency. The group has continuously made headlines in recent months for similarly disruptive protests—a sit-in on the Cambie Bridge in March and a protest taking over the Hornby and Smithe intersection in February that both ended in numerous arrests, for example.

After permitting demonstrators "to peacefully assemble and express themselves for several hours," on Saturday, police asked those gathered to disperse and allow the intersection to reopen for traffic.

While most attendees complied, four people remained in the boat, "despite multiple requests from police to exit," according to the VPD.

'We literally don't know what else to do'

The watercraft was painted pink, with black letters reading "Tell the truth," while the boat was named Tahlequah, "after the orca J35," Extinction Rebellion explained in a tweet on Saturday. In 2018, after her calf died, the southern resident killer whale made headlines for carrying the calf's body for 17 days in an unprecedented display of grief.

Protestors stepped into the boat throughout the afternoon to speak out about their climate-related concerns, from the loss of species and old-growth forests to rising temperatures and food scarcity.

"The horror of what has already been lost and what's to come is being soft-peddled—while meaningful action is delayed. Rationality—listening to science, mutual care, and protecting the life support systems that actually keep us alive—is now radical," the group claimed in a tweet posted Saturday evening.

"Our governance systems are so defunct that they are still psychopathically ignoring the radical/rational path forward," it added. "This is why we're making sacrifices and putting our bodies on the line. We literally don't know what else to do."

Saturday's demonstration is intended to be the first of several protests and events scheduled to block major arteries throughout Vancouver over the first five days of May. Organizers are calling it a "Spring Rebellion."

On Sunday, the group plans to take over the Granville Street Bridge to call for Extinction Rebellion's second demand: "Act Now." Members plan to follow that up by shutting down the Lions Gate Bridge on Monday, to "say no to fossil fuel exports in waters of the Salish Sea, and to demand a Citizens' Assembly on climate and ecological justice."

Following these two major disruptions, Extinction Rebellion will host a bike/skate for climate and educational sessions with elders and members of host first nations on Tuesday and Wednesday.

Extinction Rebellion is a global movement that began in the U.K in 2018. It claims to use non-violent civil disobedience to appeal for increased climate action from both governments and the public, which group members say is necessary "to halt mass extinction and minimise the risk of social collapse."