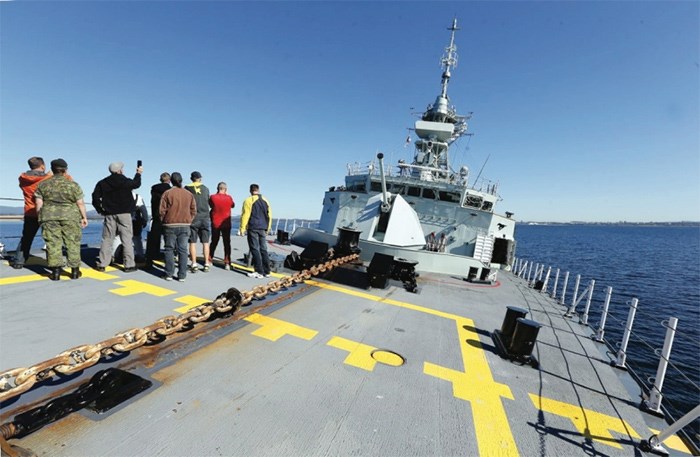 The amount of fuel that spilled from a navy frigate into the Strait of Georgia on Saturday was less than initially thought, B.C.’s Environmental Emergency Program said Tuesday.

An updated incident report indicates that the Department of National Defence now estimates that 10,000 to 20,000 litres of F-76 fuel spilled from HMCS Calgary — as opposed to the 30,000 litres reported earlier.

F-76 fuel is a distillate similar to kerosene that floats on the water and quickly evaporates, the navy said.

Four Orca-class vessels were dispatched from CFB Esquimalt Monday to scan the shorelines for fuel, but found no evidence of the spill. The Canadian Coast Guard and B.C. Ministry of Environment assisted with the search.

The province’s incident report states that the spill took place between 3 a.m. and 8 a.m. Saturday during a re-fueling operation on the Halifax-class frigate.

Fuel began spilling from the ship near Parksville and stopped about 100 kilometres to the southeast, just west of Tsawwassen.

A Transport Canada surveillance plane flew the ship’s route, but spotted no evidence of a fuel sheen on the water.

Environment Canada developed a model that showed the fuel likely dispersed quickly due to sea conditions and would have no impact on the shoreline, the incident report said.

Maritime Forces Pacific said it has launched an investigation to determine the cause of the spill and has not ruled out human error.