"To date, we’ve had positive exposures where employees have had to self-quarantine/monitor themselves."
Mar 24, 2021 1:53 PM By: Elana Shepert 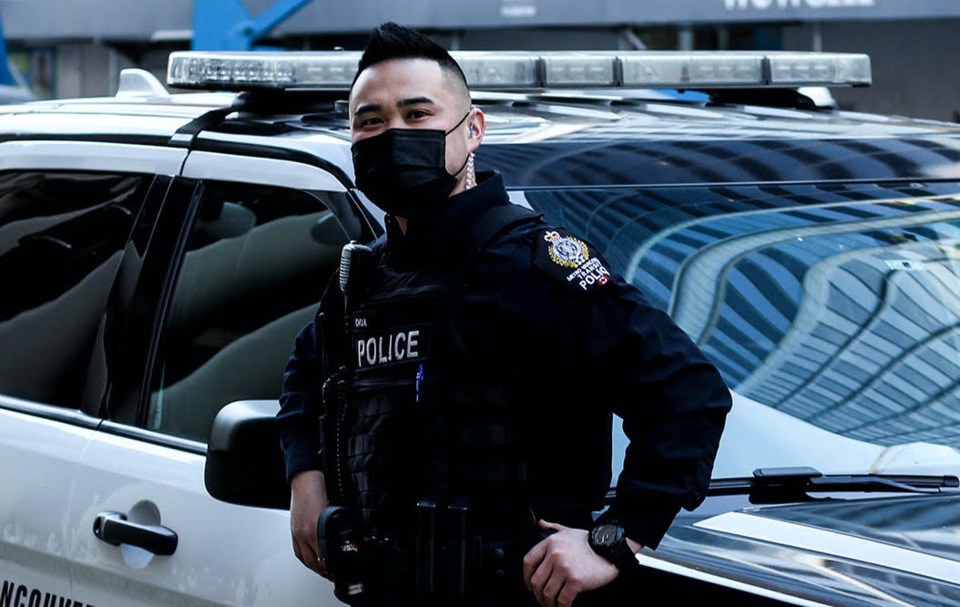 Darren Chua has been working for the Metro Vancouver Transit Police since 2016, but he saw a drastic change from his previous duties during the coraonvirus (COVID-19) pandemic.

After serving Indigenous communities in Northern Manitoba for six years as a police officer, Chua joined the Transit Police. Now, he works as the designated Neighbourhood Police Officer for the City of Surrey. "Coincidentally, I was born, raised, and currently reside in Surrey, so I am grateful to have the opportunity to serve my community," he tells Vancouver Is Awesome.

Chua received his five-year service pin from the Transit Police last week. However, this time last year, at the start of the pandemic, he says he thought things would return to normal soon.

"At the start of the pandemic, things were status quo. I worked my usual four days a week, 10-and-a-half hour shifts. Initially, I believed the virus, just like everything else, would pass and things would go back to normal fairly quickly," he explains. "However, having a spouse working on the frontline in healthcare and dealing with COVID-19 patients quickly changed my perspective.

"As lockdowns progressed, it was a tough adjustment from normalcy."

Like many Canadians, Chua loves to travel. He jokes that he "caught the travel bug" and had a few trips planned prior to the pandemic that were cancelled. Other than that, he says he typically spends his days-off catching up with family and friends, "now over Zoom of course."

"To date, we’ve had positive exposures where employees have had to self-quarantine/monitor themselves. There are risks but protocols have been put in place to ensure our safety, whether we are in the office or out on patrol."

After a few months of back-filling for patrol, Chua was seconded to the Federal Integrated Quarantine Enforcement Team. The team was comprised of officers from the RCMP, CBSA, Provincial Health Authority and municipal police departments.

"Our main task was enforcing the federal Quarantine Act and ensuring travellers entering Canada were abiding by the quarantine rules," he explains. "This was definitely a drastic change from my previous duties in patrol and community policing.

Chua was "just shy of the one-year term" that he served on the team, and had the opportunity to work with different agencies and travelled to almost every municipality in and around the Lower Mainland. Now, he's returned to community policing.

"I’m still adjusting to the new norm. Pre-pandemic, I was always busy interacting in-person with members of the community. Now, most of my interactions are over Zoom, which makes it tough, as everything has to be pre-arranged and doesn’t have the same feeling as meeting people in person."

When asked if there was anything Chua wanted to tell the communities he serves, he said he misses seeing them.

"With many of our regular commuters staying home, I miss seeing you! However, I understand that we’re not out of the woods just yet!"