This humpback whale was spotted in Vancouver waters 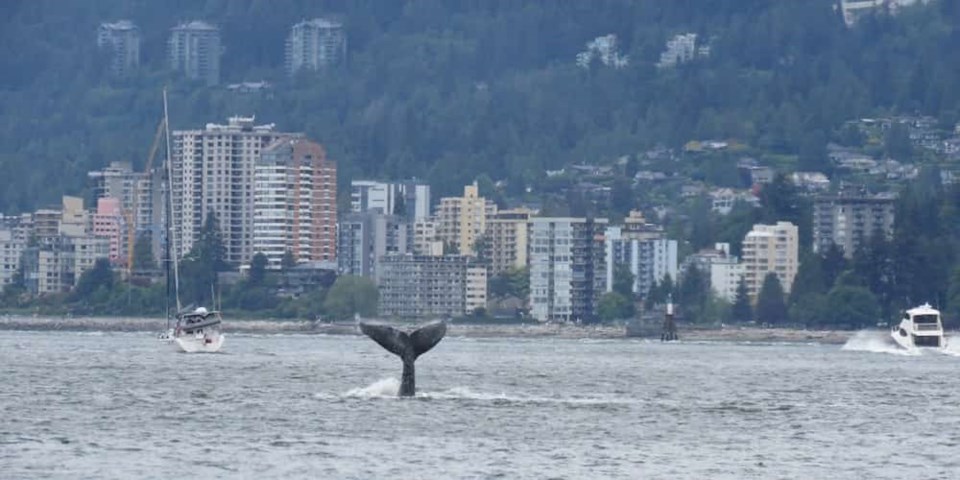 On Friday, May 22, Port of Vancouver tweeted an image of the whale's tail sticking out of Vancouver waters. They add that people should report sightings of whales in local waters by using the WhaleReport app. Alternatively, you can call 1.866.I SAW ONE (1.866.472.9663) to report the sighting.

By reporting your cetacean (whale, dolphin, and porpoise) and sea turtle sightings, you are directly contributing to conservation-based research. Sightings are analyzed to obtain valuable information about species distribution patterns and aid in future recovery and management plans for species at risk.

A couple of videos showed whales swimming in the sunshine just outside of Deep Cove in North Vancouver this week. North Vancouver resident Nelson Phillips recorded the videos from his parent's house, which is located up Indian River Drive in North Vancouver. He adds that the area is just off Raccoon Island, and that you can see Twin Islands in the background to the left in the video.

Prior to that, a video captured orcas swimming in the sunshine near Lighthouse Park in Vancouver. In the recording, a boat is seen off in the distance at Juniper Point and an orca surfaces for air. A short while later, a second whale surfaces, and it looks like a delicate spray of mist comes out of its blowhole. View it HERE.

Thinking of going whale watching on the water?

This oceanfront Kitsilano home is currently the priciest listing in Vancouver (PHOTOS & VIDEO)
Sep 27, 2020 11:14 AM
Comments
We welcome your feedback and encourage you to share your thoughts. We ask that you be respectful of others and their points of view, refrain from personal attacks and stay on topic. To learn about our commenting policies and how we moderate, please read our Community Guidelines.