A retaining wall failed and toppled over, sending mud, rocks, trees and other debris down the slope and onto the lane
Jan 23, 2020 2:43 PM By: Cornelia Naylor 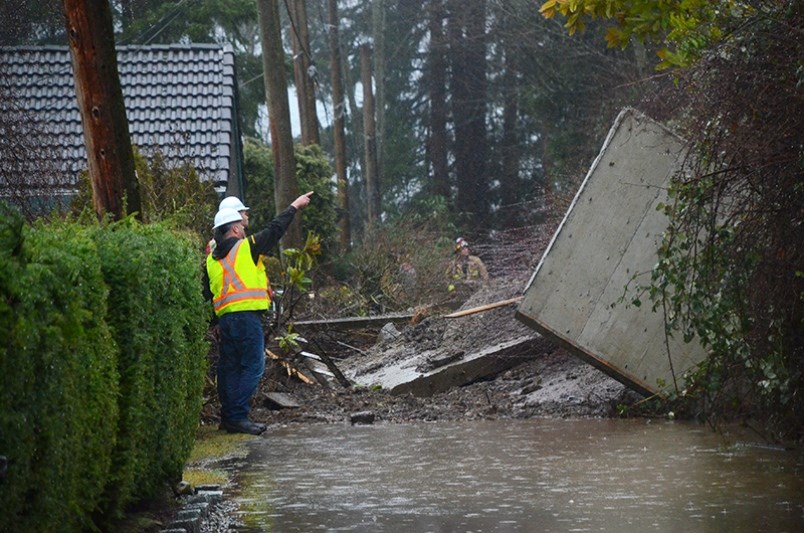 A small landslide buried a section of a Burnaby lane in mud, rocks and other debris Thursday morning.

Firefighters were called to the lane between Barnet Road and Braeside Drive at about 9:30 a.m., according to assistant fire Chief Barry Mawhinney.

Firefighters secured the scene, evacuating some residents in the area, Mawhinney said.

No injuries were reported.

Brian Carter, manager of public works operations, told the NOW a retaining wall had failed and toppled over, sending mud, rocks, trees and other debris down the slope and onto the lane.

Carter said the site has been secured in case more of the wall or slope comes down.

Carter said it will be up to geotechnical and structural engineers to figure out what caused the collapse but rain can cause problems for improperly built retaining walls.

“Retaining walls on slopes like that have to be properly engineered and they have to have drainage in behind them to release that pore pressure that you get from the build-up of water,” Carter said, “but I don’t know the root cause of the failure that this point.”

B.C. Hydro arrived on scene at 11 a.m. to shut down power in the area until an assessment is made of the retaining wall and slope.

“At this point we’re just making the site safe for the public,” Carter said.