"The VPD take all of these incidents very seriously and are investigating this graffiti."
May 20, 2020 12:35 PM By: Elana Shepert 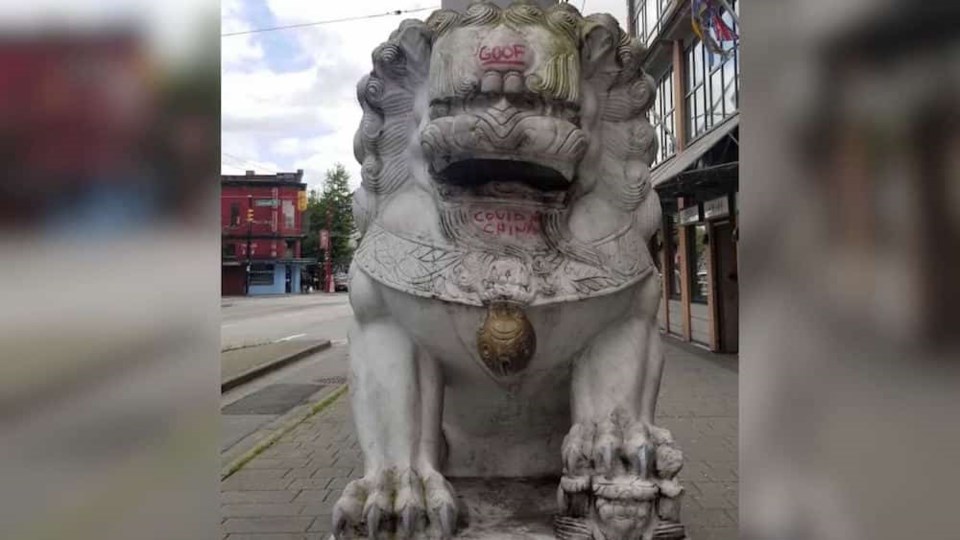 Vandals defaced both lions at the foot of the Millennium Gate in Vancouver's Chinatown with racist graffiti.

Chinatown Today shared an image of the hateful graffiti on Twitter on Tuesday. In addition, @sarahwyling shared another angle of the graffiti, stating that, "Both lions were defaced."

New racist graffiti at the foot of the Millennium Gate.#ChinatownYVR pic.twitter.com/OXxtjDZWp4

Constable Tania Visintin, Media Relations spokesperson for the VPD, tells Vancouver Is Awesome in an email that police are aware of the racist graffiti.

"The VPD take all of these incidents very seriously and are investigating this graffiti. We are asking anyone who is the victim of any of these hate crimes or is a witness to a hate crime to contact the VPD so we can investigate," she writes.

Premier John Horgan released a statement regarding a surge in racist activity across British Columbia during the COVID-19 pandemic on VIctoria Day.

The statement came after Vancouver Police responded to a racist assault in East Vancouver on Friday night. According to the victim, a man punched her in the face and shouted a slew of racial insults after she sneezed. He also told her to, "Go back to Asia." The victim is Indigenous.

According to the Vancouver Police Department, as of May 1, 2020, there have been 20 anti-Asian hate crimes reported this year, compared to 12 reported in the whole of 2019. This UBCIC notes that this trend speaks to the stark reality that people of colour face disproportionately high risks to their physical and mental survival every day, a risk that has been intensified by dangerous false messaging about COVID-19.

Richmond woman gets apology after BC Parks worker defends ‘all lives matter’ slogan in campground
Jul 3, 2020 4:42 PM
Comments
We welcome your feedback and encourage you to share your thoughts. We ask that you be respectful of others and their points of view, refrain from personal attacks and stay on topic. To learn about our commenting policies and how we moderate, please read our Community Guidelines.