Man with exposed genitals jumps on car in Vancouver intersection 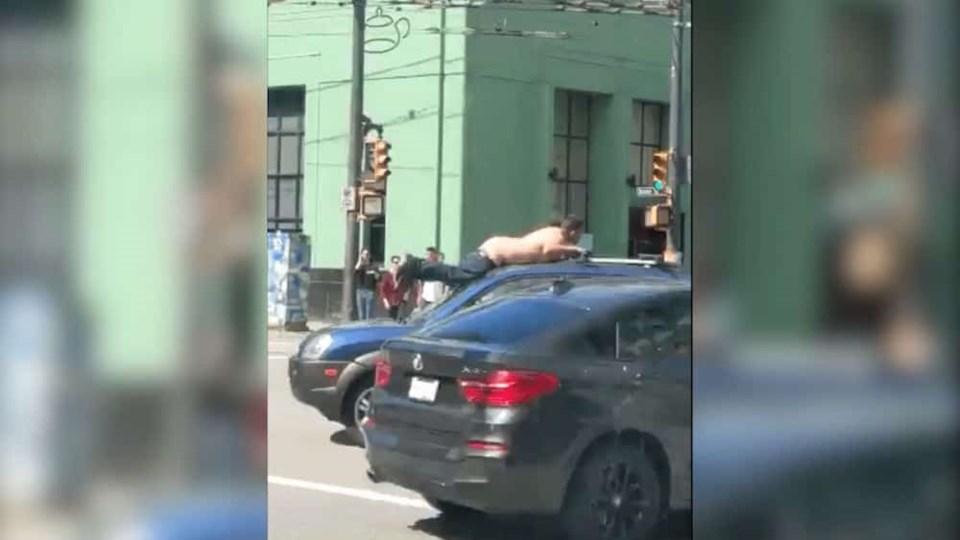 A group of concerned residents in the Yaletown area say a man exposed himself during the daytime while jumping on a woman's car in the middle of a Downtown Vancouver intersection.

In a Twitter post, a group called A Safer Vancouver writes that the man, "exposed himself yesterday in broad daylight after jumping all over a woman's car."

The group also shares a couple videos of the incident, which show a distressed man with his pants falling down past his waist jumping on to the hood of a vehicle at the intersection of Granville St. and Davie St. The man also runs down the street and appears to be swinging a piece of clothing over his head; he also tosses a business's sign over his head.

A person in the video says, "The poor woman in the car. She'll never forget this."

Vancouver Police Spokesperson Tania Visintin tells Vancouver Is Awesome in an email that police responded to an incident around 4:00 p.m. on June 24 after they received multiple 9-1-1 calls of a naked man who was seen in the area of Granville and Davie streets jumping on cars.

"The 30-year-old man appeared to be high on drugs and was acting erratically and aggressively toward patrons passing by," writes Visintin. "The man was taken into custody by police under the Mental Health Act. He was brought to hospital where he was held in the care of psychiatric staff."

Visintin adds that there were no injuries to any member of the public.

Earlier this month, a group called Safer Vancouver has launched a Change.org campaign. Entitled "A Safer Vancouver," the campaign states that the city has seen a dramatic increase in, "illegal open drug use, discarded dirty needles, encampments in community parks and public spaces, increased break-ins and theft, violent and aggressive behaviour" over the past few years.

However, not all of the former Oppenheimer campers felt that the move served their best interests. A few of them state that many homeless people have been negatively affected by the move, while others say they were bumped off the housing list.

Safer Vancouver underscores that they understand that people on the street are fighting with mental health and addiction issues. However, they say that the temporary housing arrangement isn't an effective way to help people.