A woman asks how the B.C. government can call the housing project a "success" when not everyone got housed and she was passed up: "There's something wrong with that."

Downtown Eastside advocates gathered outside of a fenced-off Oppenheimer Park today to speak about the city's eviction of the former encampment.

Red Braid Alliance for Decolonial Socialism organized the conference with residents of the Downtown Eastside community to highlight the thousands of people who are still homeless across the province.

The grassroots organization argues that the move out of Oppenheimer was positive for some, but that, "it does not solve the problem of homelessness for the 10,000 people still living on the streets, in SROs, in modular housing, and in shelters in the DTES." Further, they state that many homeless people have been negatively affected by the move, while others were bumped off the housing list.

Estimates vary, but over 200 former Oppenheimer residents were moved into temporary hotels. However, many residents of the DTES say that the temporary hotels come with a number of restrictions. According to today's speakers, one of the most significant is the "no guest policy." What's more, couples were split up.

Erica Grant, DTES advocate and Oppenheimer Park supporter, welcomed everyone at the start of the gathering and acknowledged that the conference was taking place on the Musqueam, Squamish and Tsleil-Waututh First Nations.

Grant lost her son at the beginning of COVID-19 lockdown, and says that the "no guest" policy prevented her from checking on him. She says that no one at the hotel was checking on him, and that he died of an overdose.

Karen Lane, a resident of the DTES for over 40 years, explains how the displacement of Oppenheimer has put more people on the street. She lived in modular housing, and says that there is, "No room to social distance." She adds that someone died in the building where she lives three nights ago, but no one knows why. In addition, she says people have broken into her unit and that she has bed bugs.

She adds that many people who were staying at the park with family and friends have lost shelter, and some Oppenheimer residents did not get housing. "They have nowhere to go. They’re feeling isolated and alone. It’s divide and conquer.”

Casey, a resident of the DTES, says she was passed up for an opportunity to be housed. She adds that her life is in danger as she lives in a shelter with 65 other women, "who may or may not be hygienic to the standards that I need to be."

Casey asks how the B.C. government can call the housing project a "success" when not everyone has accommodation and she was passed up.

"There's something wrong with that."

Inja Trots Aia says the no guest policy further marginalizes vulnerable people. While this was part of a COVID-19 policy, she remarks that it isn't, "Realistic to think we can all have a vacation from being homeless at the Howard Johnson."

Trots Aia adds that people are allowed outside and back into the hotel, and that people hang out when they go outside. As such, she says that the contamination will happen, regardless. She notes that people have been camping in the parking lots outside the hotel.

However, an Indigenous elder in the DTES says that the eviction order merely shows that “the city doesn’t care about housing people, they just want to get rid of the eyesore."

All spaces are monitored by non-profits, which provide 24-7 support for residents, including access to health care and medication-assisted drug treatment if needed. Two meals a day are provided.

With this in mind, Fiona York, a member of Carnegie Community Action Project, says that people are not allowed to bring outside food, and people may or may not like the meals that are delivered. She adds that people are often questioned about what they are bringing in to the buildings.

Just over a week after hundreds of homeless people were cleared from Oppenheimer Park in Vancouver's Downtown Eastside, a new tent city continues to expand in a parking lot near Crab Park.

Now, the Port of Vancouver says it is taking legal action against the people in the new encampment.

Matthew Borghese, Senior Communications Advisor, BC Housing, tells Vancouver Is Awesome in an email that 261 people were transitioned out of the Oppenheimer area to indoor spaces over two weeks. He says that BC Housing, "offered accommodations to everyone in Oppenheimer, and there was a space available for everyone in the encampment."

While he says that everyone was given one bin for all of their belongings, there were restrictions on what people could take. For example, things such as weapons, propane tanks, and camping equipment are not permitted. 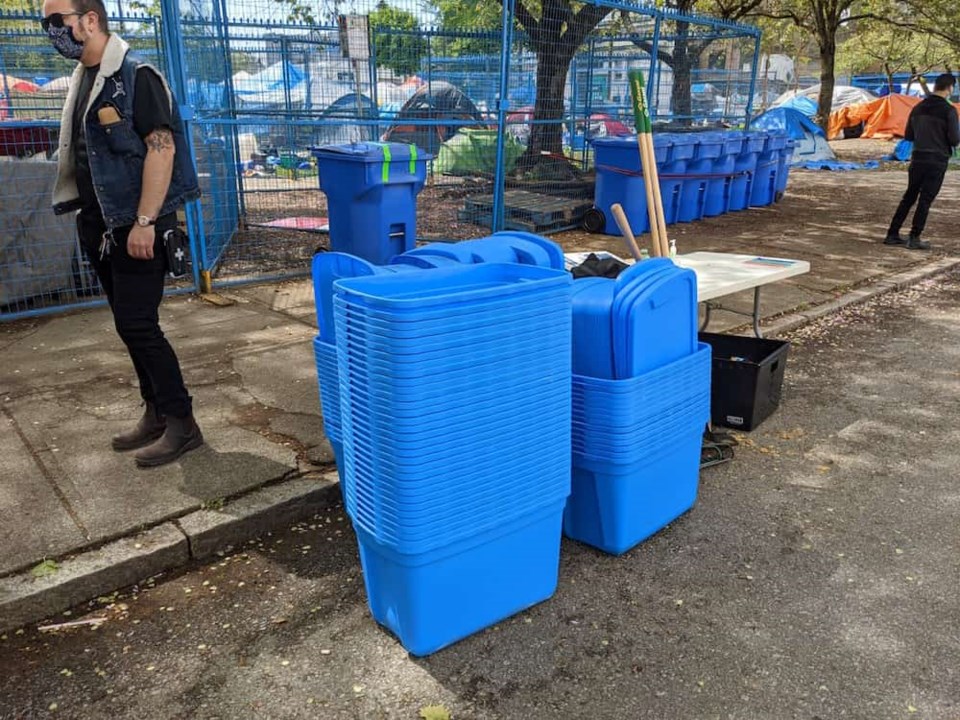 Borghese encourages anyone currently residing at Crab Park that is seeking an indoor space to go to Orange Hall located on Gore Avenue. He adds that BC Housing is actively assisting with outreach efforts for people at Crab Park.