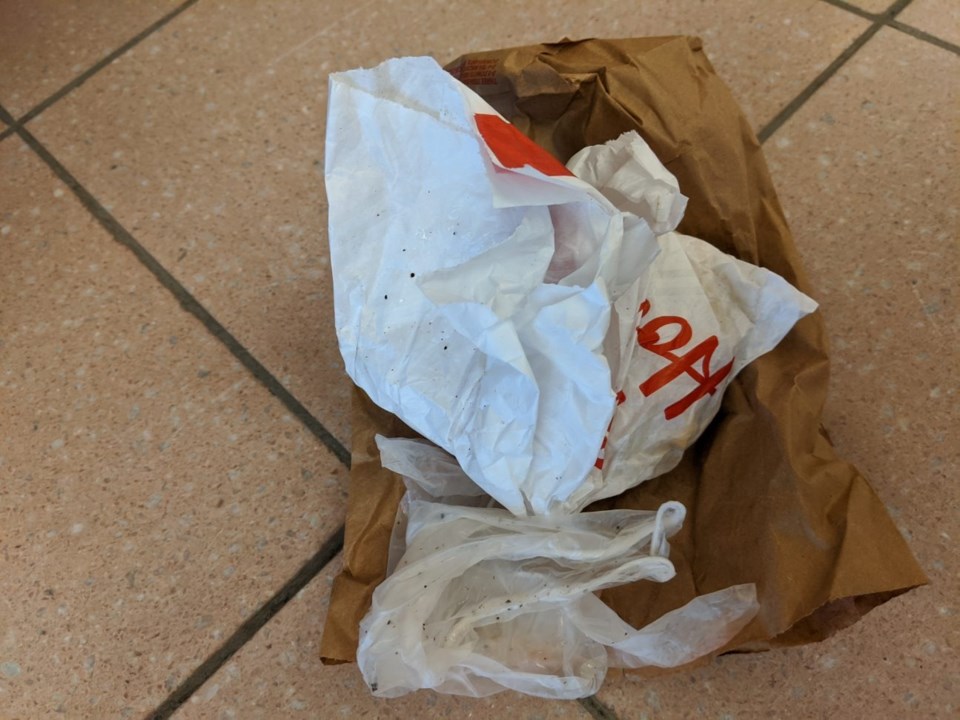 A Metro Vancouver man is speaking out after claiming he found a used, disposable glove in the paper bag containing his Tim Hortons order Monday morning.

Sean Davies had already finished the hash brown he bought for breakfast from Tim Hortons Harbour Centre location in Vancouver - which he said wasn't fully contained in its paper protective wrapper, but he "didn't really think much of it" - when he dug through the bag to find the second of two sausage breakfast sandwiches he had ordered alongside his coffee.

"Disgusting doesn't quite cover it."

Disturbed, Davies showed the glove to another worker on his downtown Vancouver job site. "He's like, 'What, no way,'" Davies recalled. "We both couldn't believe it."

Davies immediately returned to the location to show staff the glove and to demand a refund for the order. He said the employee he spoke with apologized and agreed to give him his money back.

After attempts to reach Tim Hortons corporate office through a complaints line, Davies said he instead received a call back from the location where he initially purchased the food, apologizing again for the incident. Later in the afternoon, he received a second call from the location, inviting him to speak with the restaurant's general manager, who he said "genuinely seemed very concerned."

Davies said the manager he spoke with instructed him to go to the doctor, "right away."

According to Davies, the restaurant kept the glove and provided him with a file number for an internal investigation.

As for next steps, Davies said he'd like to see the coffee shop "held accountable" for its mistake. "I'd like to see some form of like health inspection done, or some sort of health and safety audit," he added.

"I don't really know what to do, I just know that it's a really big problem," he continued. "And it kind of highlights a larger problem, like, it's not just the fact that I found a glove in my bag of food. It's the fact that that's able to happen.

"That's just one thing - to think, like all the dirty [things that] glove touched before it touched my hash brown, and then I ate it. It makes me disgusted every time I think about it."

While Davies said he'd be open to eating at a different Tim Hortons location in the future, he said he'll never go back to the Harbour Centre franchise.

"Ultimately it sucks for me because I love Tim Hortons," he said. "I love my triple-triples and I like having a doughnut. And now, after 28 years of eating at Tim Hortons, I'll never, ever return. So there isn't much they can do.

"I'd like to see the public made aware of the fact that this can totally friggin' happen."

A request for comment submitted to Tim Hortons media relations department was not returned by the time of publication, while multiple calls to the company's Harbour Centre location this afternoon went unanswered. This story will be updated as V.I.A. receives further information.

Vancouver’s empty homes tax to double next year to three per cent
Nov 25, 2020 2:11 PM
Comments
We welcome your feedback and encourage you to share your thoughts. We ask that you be respectful of others and their points of view, refrain from personal attacks and stay on topic. To learn about our commenting policies and how we moderate, please read our Community Guidelines.