A mountain biker in his mid-30s who was visiting the North Shore could be facing permanent paralysis after a crash on an unsanctioned trail on Mount Seymour Tuesday night.
0
Aug 30, 2018 6:32 AM By: Brent Richter

A mountain biker in his mid-30s who was visiting the North Shore could be facing permanent paralysis after a crash on an unsanctioned trail on Mount Seymour Tuesday night.

It took a multi-agency effort to get the severely injured tourist from eastern Europe out of the woods after bystanders called 911 just after 6:30 p.m. 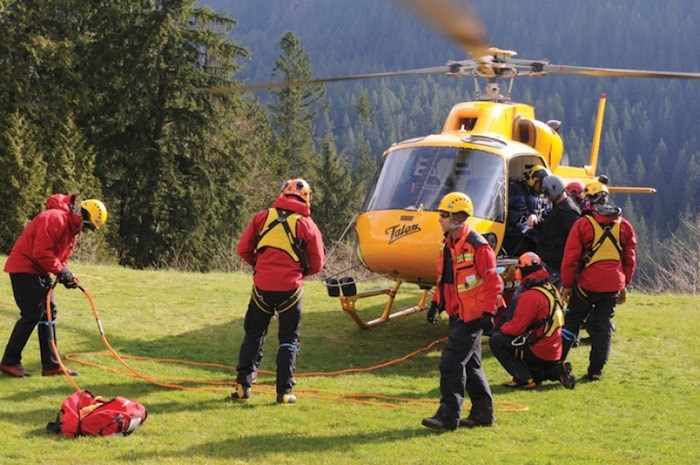 “My understanding is he went over the handlebars and landed headfirst on the ground,” said Mike Danks, North Shore Rescue team leader. “He sustained some pretty significant spinal trauma.”

One of the bystanders was an off-duty paramedic who was able to relay some grievous details to incoming rescuers.

“He did say that the mountain biker had no feeling, basically from his chest down,” Danks said. “Based on that, we got an aircraft moving right away. ... We activated our advanced medical provider group so, within 20 minutes, we had an ER physician and an anesthesiologist ready to go in the field with one of our helicopter rescue technicians.”

District of North Vancouver Fire and Rescue Services crews were the first on scene. Fire Chief Brian Hutchinson said the man was riding a steep and dangerous unsanctioned trail just north of the Mushroom parking lot off Mount Seymour Road.

Once they assessed the man’s injuries, district fire members determined the fastest and safest way to get him out of the woods was from above and requested North Shore Rescue prepare for a long-line evacuation, Hutchinson said.

North Shore Rescue members lowered the victim down to a waiting ambulance in Inter River Park, which rushed him to Vancouver General Hospital.

“It was just in the nick of time that they were able to get him out before darkness,” Danks said. “It’s a real testament to the multi-agency response and how well the agencies on the North Shore work together.”