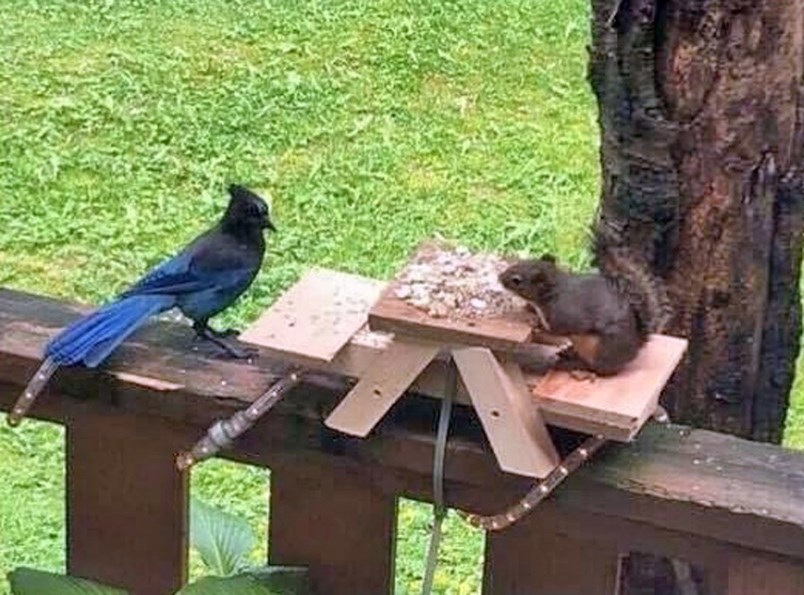 A squirrel chows down on some nuts while having a seat on one of the many miniature picnic tables a North Vancouver teen built this past summer. Photo: Vancouver Orphan Kitten Rescue Association/Facebook

While it’s news to no one that teens love watching YouTube, it should be pointed out that sometimes they’re learning a neat trick or two in the process.

Case in point: a 13-year-old North Vancouver youth who, after being inspired by a video of someone building a miniature picnic table for squirrels, decided he’d start making his own wood creations for the bushy-tailed acorn-chasers in his own neighbourhood.

This past spring, with students largely stuck at home due to the pandemic, Liam Labriola decided to undertake the project in order to remedy his boredom and do some good for a charity he was passionate about at the same time.

“He built his own prototype,” said Jody Butler, Liam’s mom, of Liam's first attempt at a picnic table for squirrels – an outdoor item that’s exactly what it sounds like, and twice as cute.

With the help of Butler’s partner, who’s a carpenter, Liam was eventually able to convert his original model into something that more closely resembled a picnic table using discarded cedar shingles and other bits of wood.

“If you dole out a little area for the squirrels, and you put out a little handful of nuts on the table, they will come to it. It’s actually quite hilarious. It becomes habitual and they keep coming back to this little table,” said Butler, noting that the addition of a squirrel picnic table in a backyard can help keep the mousy mammals away from bird feeders.

Liam, who’s a cat-lover, also had the idea to canvass his Upper Lonsdale neighbourhood to see about selling his picnic tables and donating some of the proceeds to the non-profit Vancouver Orphan Kitten Rescue Association.

He sold more than 20 tables throughout the summer and donated more than $100 to the association. After the association posted a thank-you to Liam on its Facebook page, orders for 13 more picnic tables came in, Butler noted.