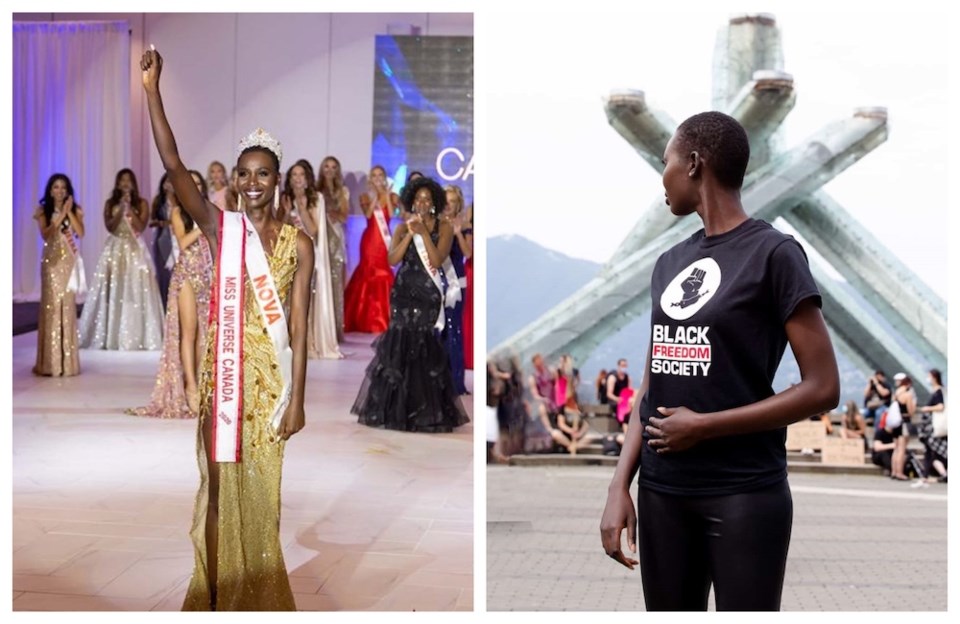 Stevens, 27, donned a brilliant gold evening gown on Saturday, Oct. 24 as she accepted the highly-coveted title. The anti-racism advocate was selected out of 55 candidates and will go on to represent the country at the international Miss Universe pageant.

"Yes, I want you to see colour--because seeing colour does not mean you're a racist. Instead, it allows you to see the struggles experienced by people of colour," said Stevens.

Stevens also encouraged viewers to diversify their surroundings to get a better understanding of the struggles people of colour face in society. She emphasized that Canada's true beauty is its multiculturalism.

I am Nova Stevens. I am a Canadian and a Black woman. As I stand before you, I want you to see me as a black woman. Yes. I want you to see colour. Because seeing colour does not mean you’re a racist; instead, it allows you to see the struggles experienced by people of colour. You’ve heard the news, you’ve read the stories. Innocent black lives have been lost to police brutality and hate crimes. We want you to see us. We want you to hear us. We want you to feel us. I ask that you diversify your surroundings, because when you do that, it creates a better understanding. Know that hate is taught; therefore we can unlearn it. So let’s do that! Let’s get back to our truest essence, which is love. —— My heart is full with gratitude. Thank you very much to everyone that has believed in me and supported me through this journey. As your new Miss Universe Canada, I promise to remain true to who I am and use my power, which is my voice. #missuniversecanada2020 #missuniversecanada #missuniverse #missuniverse2020 #roadtomissuniverse2020 #roadtomissuniverse

Nova Stevens in Vancouver and beyond

Back in March, Stevens co-organized a "Juneteeth" march of over 6,000 people in downtown Vancouver.

June 19, 1865 - Juneteenth - is the day that marks the emancipation of the last remaining enslaved African Americans in the Confederacy. However, slavery was abolished in Canada on Aug. 1, 1834. As such, Stevens arranged another march on Aug. 1 in Vancouver to celebrate the emancipation of the last enslaved people in Canada, as well as to celebrate the achievements of people of colour.

Stevens was sent to Canada alone at age six after her family fled the brutal civil war in South Sudan. Since then, she's been a youth mentor, travelled around the world, competed in previous Miss Universe Canada competitions, and acted in a few TV shows. And while she loves living in Canada, she says systemic racism is deeply rooted in the country.

"There are so many umbrellas of slavery - it's not just physical labour, it's systemic," Steven told Vancouver Is Awesome in a previous interview. "We are the generation of change. I believe that."

Demonstrators marched from Jack Poole Plaza down Thurlow Street, as onlookers watched from nearby rooftops and balconies. Many people cheered from the sidelines, while others proudly displayed Black Lives Matters banners from their homes.

Here are some of the personal stories they told V.I.A.

'You bleed the same way I bleed': Vancouver's 'Juneteenth' protestors share why they marched
Jun 20, 2020 6:04 PM
Comments
We welcome your feedback and encourage you to share your thoughts. We ask that you be respectful of others and their points of view, refrain from personal attacks and stay on topic. To learn about our commenting policies and how we moderate, please read our Community Guidelines.