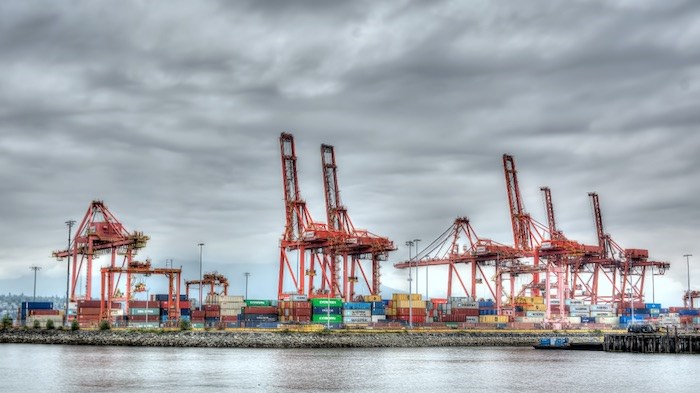 Union president Rob Ashton unveiled the report saying automation at B.C. ports could eliminate 9,200 jobs and cost the provincial economy $600 million annually. And that’s on top of a yearly loss to B.C. taxpayers of $100 million for government programs, he said.

“If you start automating more terminals, the damage could be catastrophic,” Ashton told a Vancouver news conference.

He said if foreign companies set up shop in Canada and create imbalances in port employment and the benefits that flow from that from communities, it is the federal government’s responsibility to redress that imbalance.

“Automation should not simply benefit only corporations while leaving workers and their communities to deal with the damage left behind,” Ashton said.

The report was done by Prism Economics and Analysis.

“Disruption on this scale will be felt by the provincial economy and will have an acute effect in some local communities, particularly those that rely on this industry for good jobs and the economic benefits they bring locally,” Prism partner John O’Grady said.

The report broke down the impacts by communities on the B.C. coast, saying automation could eliminate significant numbers of middle class and high-income jobs in marine-dependant communities. It focused only on the container sector of port operations.

The report said longshore employment accounts for 26% of all jobs paying more than $70,000 a year in Prince Rupert. In Delta, the number is 11% and 2% in Vancouver.

In the brownfield scenario, the report predicts the loss of 2,300 jobs in Delta, 2,200 in Vancouver and 700 in Prince Rupert.

In the greenfield scenario, those numbers are 4,100 in Delta, 4,000 in Vancouver and 1,200 in Prince Rupert. That would also lead to an estimated net loss of $66.6 million in federal tax revenue, $29.9 million provincial revenue and $8.3 in municipal revenues.

“It is clear that the loss of jobs stemming from automation will have a significant impact on lost wages for individual workers but also the communities in which they live,” the report said.

Ashton said if the federal government does not step in and prevent corporations from automating ports, the impacts will be significant. He wants the issue on the table for October’s federal election.

While it nearly 18 months to secure a new collective agreement between B.C.’s port workers and maritime employers represented by the B.C. Maritime Employers Association (BCMEA), it’s going to take far longer to secure consensus between the two sides on how the province’s terminal operators will incorporate automation in their cargo-handling processes.

And, it’s a consensus major U.S. port competitors on the West Coast are already struggling with.

The fight over plans by the port division of the world’s largest container carrier company to upgrade Pier 400 infrastructure at the Port of Los Angeles is a flashpoint example.

Unions there oppose what they see as the huge social and financial costs that will be borne by their membership from any significant automation of containerized cargo movement.

BCMEA chairman Jeff Scott could not be reached for comment.