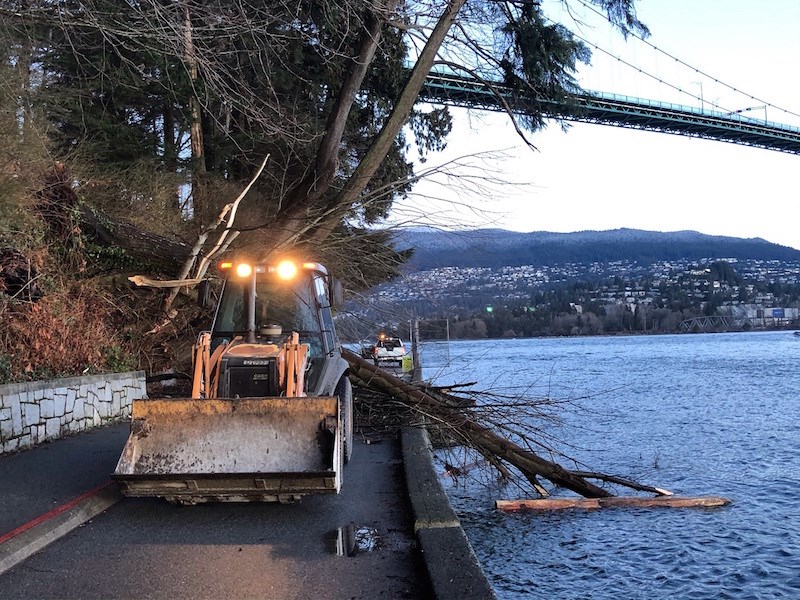 A fallen tree along the seawall in Stanley Park. The seawall will be closed in the area while crews work to remove the tree. Photo via @ParkBoard/Twitter

A large tree that came down along the seawall in Vancouver's Stanley Park has forced a closure of the popular walking and biking path Friday.

The seawall is closed between the north end of Pipeline Road (just east of Lions Gate Bridge) and Third Beach.

The Vancouver Park Board shared an image of the tree, noting the location of the closure on Friday morning.

Visitors to Stanley Park can expect the closure to be in place through Friday and possibly into the weekend.

"The work is intensive and may take a day or more to clear up," said the Park Board.

A wind warning was issued Thursday for Vancouver and remains in place through to around midday, though winds are expected to pick up again later this evening, according to Environment Canada. The weather agency called for strong northwest winds gusting at speeds of 70 to 90 km/h this morning.

UPDATE: The Park Board said Friday afternoon that the seawall has been reopened, however, bike riders will need to dismount and walk around the cones and caution tape still in place.

Update: The #StanleyPark seawall has reopened. However, cones and caution tape are around the area and the bike lane is blocked. Bikers will have to dismount to get around the debris pile safely. https://t.co/p4Ai33BqYk