Activists push for workers' rights on May Day in Vancouver

Protesters blocked access to Vancouver City Hall this morning. Photo Dan Toulgoet The Vancouver and District Labour Council (VDLC) is holding two rallies on May 1 to mark International Workers' Day, which is also known as May Day.
0
May 1, 2018 3:28 PM By: Melissa Shaw 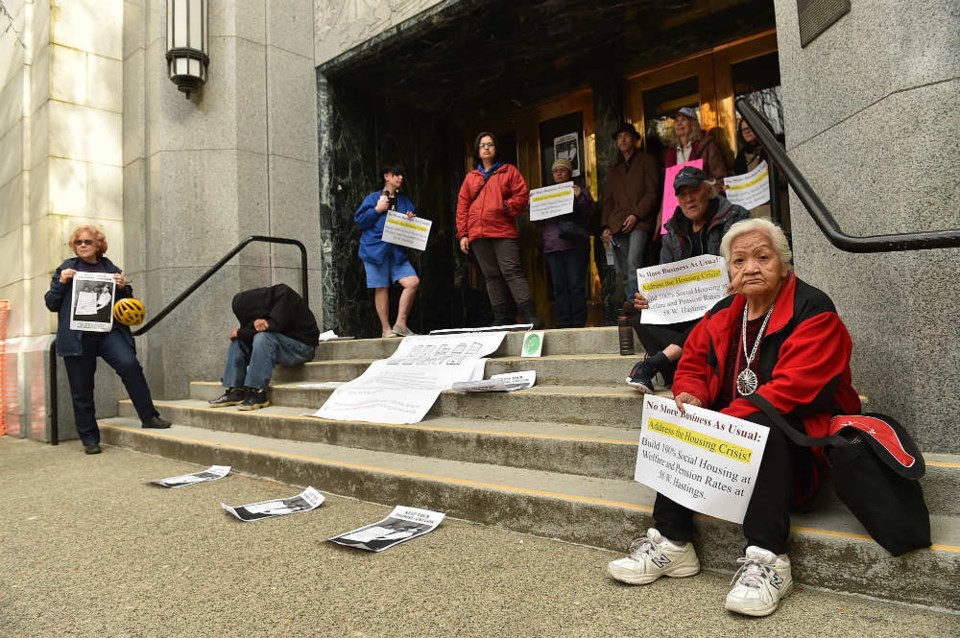 The Vancouver and District Labour Council (VDLC) is holding two rallies on May 1 to mark International Workers' Day, which is also known as May Day.

The first rally began at 2 p.m. at Canada Place featuring labour songs performed by the Left Coast Labour Chorus followed by a march to the Bentall Centre.

He says the provincial government's plans to raise the minimum wage to $15, "doesn't go far enough. It's clear that $15 is not a living wage for many people in British Columbia especially those here in the Lower Mainland where the cost of living is very high."

The City of Vancouver has gone beyond $15 by becoming a certified living wage employer last year and paying its employees $20.62, increasing to $20.91 in 2018.

Mayor Gregor Robertson says, "by investing in our people, we are building a stronger community and economy. I encourage other local employers to join the living wage movement and ensure that all Vancouver residents experience a basic level of economic security."

May Day came from the fight for an eight-hour workday in 1886 but Von Sychowski says that for many people, the eight-hour workday and the five-day workweek "are nice concepts but not realities because of precarious working conditions."

"People are working more jobs, more hours, trying to struggle to get by and they're not actually enjoying things like the weekend and the eight-hour workday that the labour movement won in the past. Those are problems that need to be addressed."

The second VDLC rally is being held in partnership with UFCW 1518. The union launched the 'Save Our Safeway' campaign after Sobeys bought the grocery chain and announced plans to close 10 stores in the Lower Mainland.

Earlier this year, Sobeys said five stores might remain open if it can negotiate a new collective agreement with the unions representing its workers. If an agreement is reached, the five stores in Surrey, Mission and Richmond would be converted to the company's FreshCo brand. Sobeys has confirmed that its five stores in Vancouver, Burnaby and Coquitlam will permanently close in July.

Vancouver's City Square Safeway is set to close as of July 28 and the 'Save Our Safeway Rally!' starts at 5 p.m. in front of the store.

The Our Homes Can't Wait Coalition also blocked the doors to Vancouver City Hall this morning disrupting a city council meeting. The group is calling for the development at 58 West Hastings to be rented at 100 per cent welfare and pension rates.