A longtime tenant of a 23-suite apartment building selling for $10.5 million and marketed to buyers for its “under market” rents joined COPE council candidate Jean Swanson Thursday to smash a piñata with a baseball bat in protest of the city’s soaring rents.
Sep 7, 2018 6:24 AM By: Mike Howell

A longtime tenant of a 23-suite apartment building selling for $10.5 million and marketed to buyers for its “under market” rents joined COPE council candidate Jean Swanson Thursday to smash a piñata with a baseball bat in protest of the city’s soaring rents.

The piñata, which was constructed in the shape of the number four with an accompanying percentage sign, represented the allowable increase the B.C. Residential Tenancy Branch set this year for landlords to raise rents. 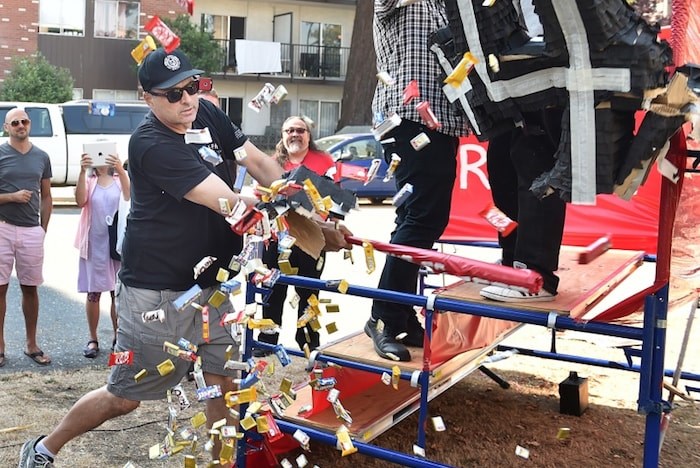 Travis Tetreault smashes a piñata at a COPE news conference Thursday outside the Capri Apartments, where he has rented a one-bedroom for 13 years. The building is listed for sale at $10.5 million. Photo Dan Toulgoet

Travis Tetreault, who pays $1,100 per month for a one-bedroom suite at the Capri Apartments on East 16th Avenue near Mount Pleasant Park, said he was unaware of COPE’s news conference but gladly joined in when he heard candidates’ message about wanting a rent freeze and a ban on so-called renovictions.

“The renovictions that are happening across the city are absolutely shameful,” he said, before he and Swanson took turns with an aluminum bat to destroy the piñata, which spilled mini chocolate bars onto the sidewalk outside Tetreault’s building.

Tetreault acknowledged his rent is reasonable—increasing $250 in 13 years—but is worried the Capri Apartments will be the next building to be renovated and trigger rent increases. That’s because the 1966 era building is listed for sale. The asking price is $10.5 million.

In the overview of the property listed with hqcommercial.ca, one of the selling features notes “rents are significantly under market, providing investors an opportunity to further enhance the revenue as suites turn over or by undertaking a comprehensive renovation program.”

Tetreault, who works in the film industry, said he and his wife, who is also employed, plan to move to Squamish, where they have purchased a two-bedroom condo that will be available in six to eight months. The longtime renter said he can’t afford the price of real estate in Vancouver.

“My options were Squamish or Abbotsford [to buy a condo] because of what the city has allowed to happen,” he said. “I love Vancouver, but there’s no future for people who want to get into the market unless you have a trust fund, are a millionaire or a Chinese gangster.”

Tetreault said he realizes he is fortunate enough to afford a place outside the city, but is concerned about the future for his fellow tenants whose incomes don’t allow a move. Swanson said “we’ve talked with many tenants in this building and this threat of renoviction is very stressful for them.”

Swanson and fellow COPE council candidates Derrick O’Keefe and Anne Roberts called Thursday for a municipal ban on renovictions, the creation of a registry to track rents and a four-year rent freeze.

The trio stood on a makeshift “stairway to rent control”—scaffolding with three steps—to propose the policy moves, which would require the provincial and municipal governments to make changes to law and create new bylaws.

But even if Swanson, O’Keefe and Roberts were elected, they would only represent a minority on the 11-member council. Asked how the trio would convince a new mayor and newly elected councillors to support their policy changes, Roberts said COPE has a long history of working with other parties.

The Courier contacted two of the owners of the Capri Apartments, who requested their names not be published to protect their privacy. They said the sentence in the real estate advertisement about “under market” rents was not their doing and were upset with their realtors for suggesting it.

“As owners, we have never asked them to include a statement or promote renoviction,” one of the owners said during a conference call. “We’re very disturbed by this because none of it was at our initiative.”

They said increases in property taxes and utility bills, while keeping relatively low rents for Vancouver, and family members deciding they couldn’t afford to maintain the building in the future, were reasons for listing the building for sale. The owners said the building has been in the family for about 60 years.

“It’s very emotional on many levels, and to have accusations that we would do anything on purpose to upset our tenants is very sad for us,” said one of the owners. “But we can’t control what a new owner might or might not do.”