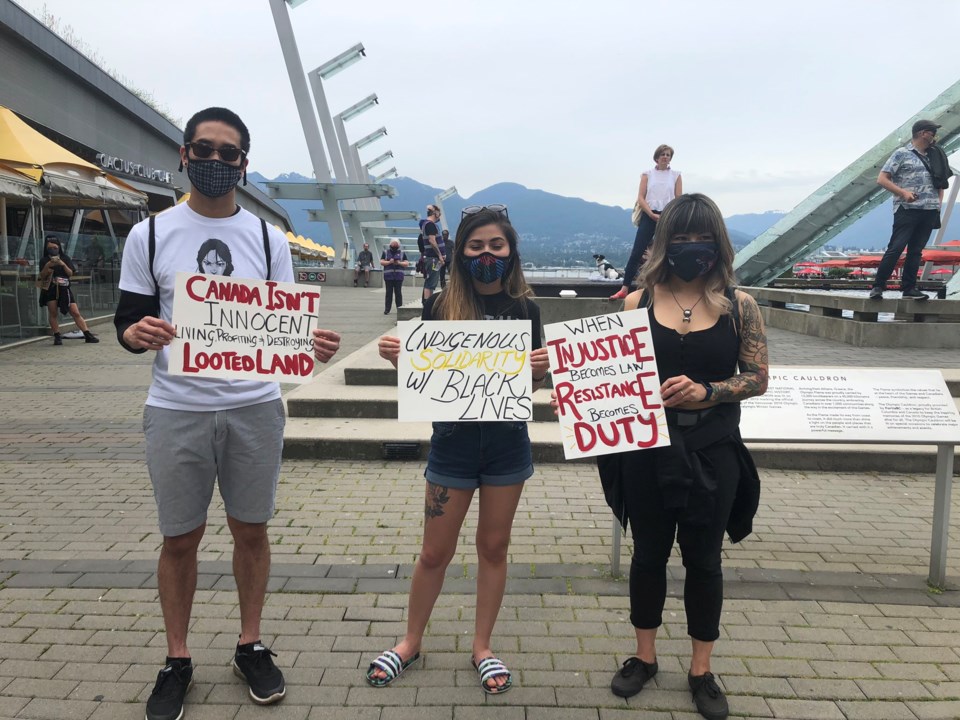 The Juneteenth "Freedom from Hate" march taking place in Vancouver today is the latest in a string of recent demonstrations protesting against racism. Photo by Elana Shepert.

One speaker (who took to the stage alongside B.C.'s favourite sign language interpreter Nigel Howard) told demonstrators they are "freedom fighters."

"All of us are engraved into this revolution now," she said. "This is the kind of movement that humanity exists for."

Thousands gathered in the West End today following the march, where the crowd took in performances from a stage set up for the occasion.

The crowd has reached its final destination, as marchers begin to fill into Sunset Beach Park near English Bay.

Thousands of peaceful protestors continue their march through downtown Vancouver, as onlookers watch from nearby rooftops and balconies along the route. Most demonstrators are wearing all black, in accordance with march organizers' requests, in addition to masks. Many attendees are carrying homemade signs displaying messages like, "Racism is the pandemic," "Solidarity," and "Legalize Black lives."

Speakers continue to lead chants from the front of the crowd, yelling, “all lives cannot matter until black lives matter!”

The march is officially underway, after those with disabilities and children were encouraged to head to the front of the crowd. Protestors are chanting phrases like, “No Justice, no peace! Black lives matter!” as well as “do you love me? Are you with me? Black lives matter!” and “racist cops have got to go, he hey, ho ho!

As marchers prepare to begin the journey, speakers are taking to the microphone to share the motivation behind today's march.

"We believe that one day we will be free, and we will be singing this song. Even though it's not 1830, it still feels like it. Why are we still marching?" she said. "It's 2020 and we're still marching. When will we be free?"

She added, "Remember what every step that you take signifies."

A crowd of protestors have gathered in Jack Poole Plaza. They're set to begin their march towards Sunset Beach at 4:30 p.m.

Vancouver Is Awesome is live at the Juneteenth march at Jack Poole Plaza. pic.twitter.com/w1NNhckthE

Another demonstration in support of the Black Lives Matter movement is taking place in Vancouver this afternoon.

Black Vancouver is hosting a “Juneteenth” march in solidarity with continued demonstrations being held across the continent and around the world. The event kicked off in Jack Poole Plaza at 4 p.m.

“Following the two recent Black Lives Matters protests, one at the Vancouver Art Gallery and the other at the Olympic Cauldron, many members of the community have advocated for a march in unity,” Black Vancouver organizers stated in a media release earlier this month.

“It is not only emotionally expressive but holds immense power, history and tradition, and is a powerful tool to create change and express community values."

The event will mark “Juneteenth,” also known as Freedom Day, Emancipation Day or Jubilee Day. The annual commemoration dates back to 1865, when slaves in Texas were first informed of their freedom and the end of the Civil War,  approximately two years after the signing of the Emancipation Proclamation.

“Though Canadian, we cannot ignore the direct ties that many of our citizens have with our neighbouring Americans below; this makes the celebration of Juneteenth just as important for us as it is for them.”

Vancouver-based Nova Stevens and Shamika Mitchell are organizing the “Freedom from Hate March,” “with the full platform support of the Black Vancouver team,” the group explained in the release.

Volunteers will be on hand during the march to hand out Black Lives Matter t-shirts to attendees. The shirts aim “to keep sparking conversations once people head home to their own communities, circles and families,” organizers explained in the release. Black Vancouver is inviting those who are able to donate to help fund the t-shirts on its website.

We will listen, feel and see each other. Together we march! Join us on Friday June 19th! ✊🏿🙌🏿 #blacklivesmatter @freedommarchvancouver #freedommarchvan #vancouver