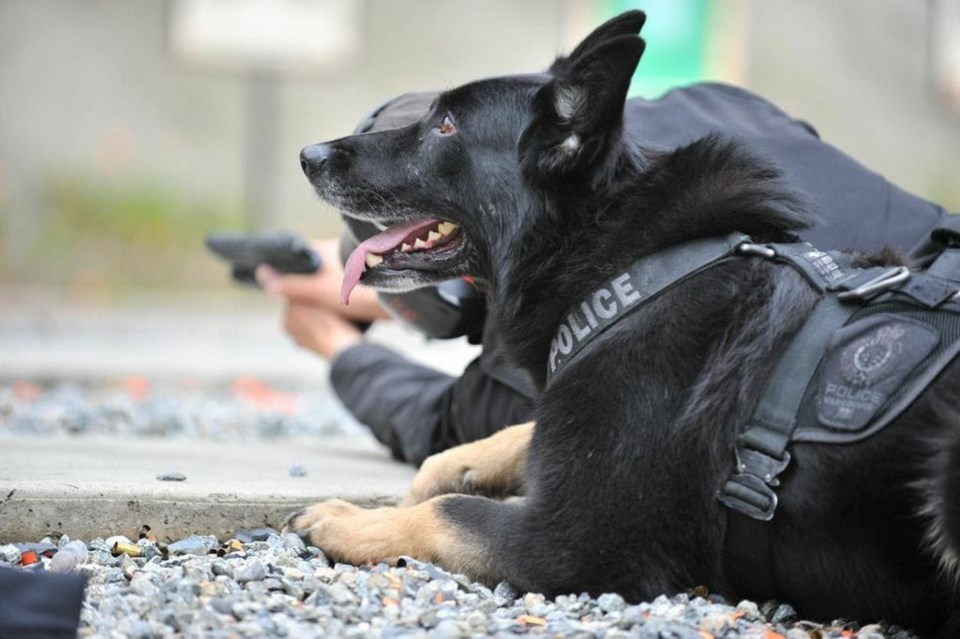 Knight the dog served the city of Vancouver as a member of the VPD's canine unit until his retirement in 2014.Twitter, @VPDCanine
The Vancouver Police Department's (VPD) canine unit is mourning the loss of its oldest retired police service dog, Knight.

The German Shepherd died Thursday night, after serving the citizens of Vancouver for nine years as part of the VPD's canine unit from 2005 to 2014.

"Knight made it to his 17th birthday and lived a wonderful life with his handler [Const.] Wong," the VPD canine unit shared on Twitter. "Rest [easy guardian] of the night, you will be missed."
Last month, the department also bid farewell to retired police service dog Bosco, who died on Feb. 17 after fulfilling his role from 2007 to 2016. "A ‘pocket rocket’ at only 60lbs., he was one of our best tracking dogs!," the VPD's canine unit remembered. "He enjoyed a wonderful retirement with his handler [Const.] Rhode, and passed away peacefully."
Vancouver's Police Canine Unit was established in 1957, making it the oldest municipal police dog unit in Canada.

Today, it's comprised of 16 dog teams that are trained in a variety of disciplines like tracking, criminal apprehension, evidence recovery, narcotics, and firearms and explosives detection, police say.

"Depending on the Unit’s needs," these police dogs—typically German Shepherds, carefully selected from breeders known for producing top working dogs for police, military, and search and rescue purposes—arrive when they are between seven weeks to two years old.

"Prospective police dogs must be social and high in drive," police explain, and "are x-rayed and must be rated 'excellent' in the hips, back, elbows, and knees prior to entering our training program."

The dogs begin the 14- to 17-week basic dog handler course when they are at least one year old. VPD police service dogs will work, on average, until they are aged eight to ten, following which they are retired to live out the rest of their days at home with their handler.

Since the canine unit's inception, eight Vancouver police service dogs have died in the line of duty. "Each lived with his handler and was considered a member of their family," reads a memorial page posted to the VPD's website. "All are deeply missed."