We're soon going to be missing a veteran radio voice in Vancouver: Rick Cluff announced his retirement from the CBC today.
Dec 4, 2017 9:25 AM By: Lindsay William-Ross

We're soon going to be missing a veteran radio voice in Vancouver: Rick Cluff announced his retirement from the CBC today, bringing to an end a over 40-year career with the broadcaster and a 20-plus year tenure as host of CBC Radio Vancouver's "Early Edition" morning show. 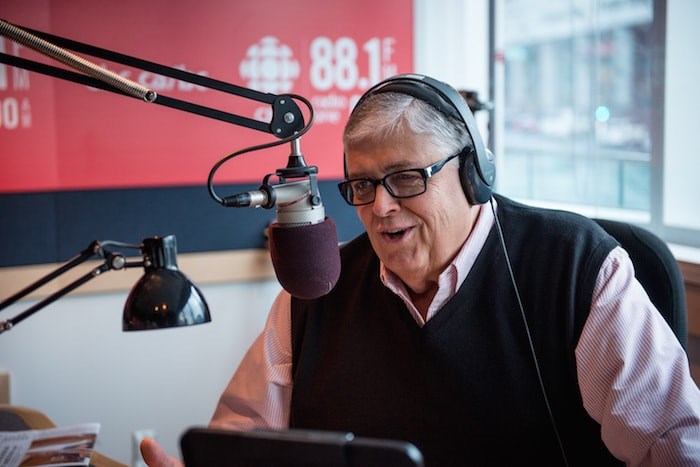 Cluff first took up "The Early Edition" hosting duties in September 1997. Prior to that, Cluff began at CBC in Ontario in 1976 as a reporter and sports commentator.

Say it ain't so: After more than 20 years with @CBCEarlyEdition and over 40 years with @cbc -- Rick Cluff is retiring. pic.twitter.com/8mKLzarTpv

Well known for his love for all things sports, Cluff has covered "eight Olympic games, five Commonwealth games, Super Bowls, Stanley Cup runs, and several Canada games as well as various world championship events from the South Pacific to the Arctic Circle," according to CBC.

"It has been a remarkable 41 years with the CBC, but all things must come to an end," says Cluff.

Cluff, who was absent for a few weeks this year for health reasons, will be at the mic for his last "Early Edition" broadcast on Friday, December 22. The broadcast will include a number of tributes to Cluff from colleagues and friends.

Meanwhile, a new "Early Edition" host will be named on December 11. This leaves a lot of CBC Vancouver listeners wondering if "On the Coast" host and frequent "Early Edition" fill-in host Stephen Quinn will make the move from the evening commute to the morning hours, or if CBC has something else in mind.

Lots of reactions and tributes have been coming in on Twitter this morning:

Congratulations to Rick Cluff on his decision to retire. 20 years hosting @CBCEarlyEdition 40 at the corp. A fine host... a better person.

Thanks @CBCEarlyEdition's Rick Cluff for hosting a great morning show.It gets me through my nearly 2 hour drive every morning to BCIT to study Journalsim. In fact, the other day I asked myself what I'd do if I had to sit in rush hour traffic without my boy Ricky, and here we are

I've been behind the glass with Rick for over 16 years, and it's an honour to work with him. Thank you Rick for being such a generous spirit and encouraging my goofy side. I'll miss you. #meh https://t.co/mlFl9RAcR4

Hard to imagine a west coast morning without hearing that soothing voice "dark and early". As you kindly said to so many guests over the years, thanks Rick Cluff, "for all you've done." @CBCEarlyEdition

Rick, it's been a privilege to work with you. Thank you for welcoming in an excited (and nervous) intern when I first walked in the door.https://t.co/o4qPwuOSxu

Rick Cluff is retiring from the @CBCEarlyEdition! How am I supposed to wake up now? pic.twitter.com/reBHNt97jJ