Street preacher incidents in Vancouver did not constitute ‘hate speech’ 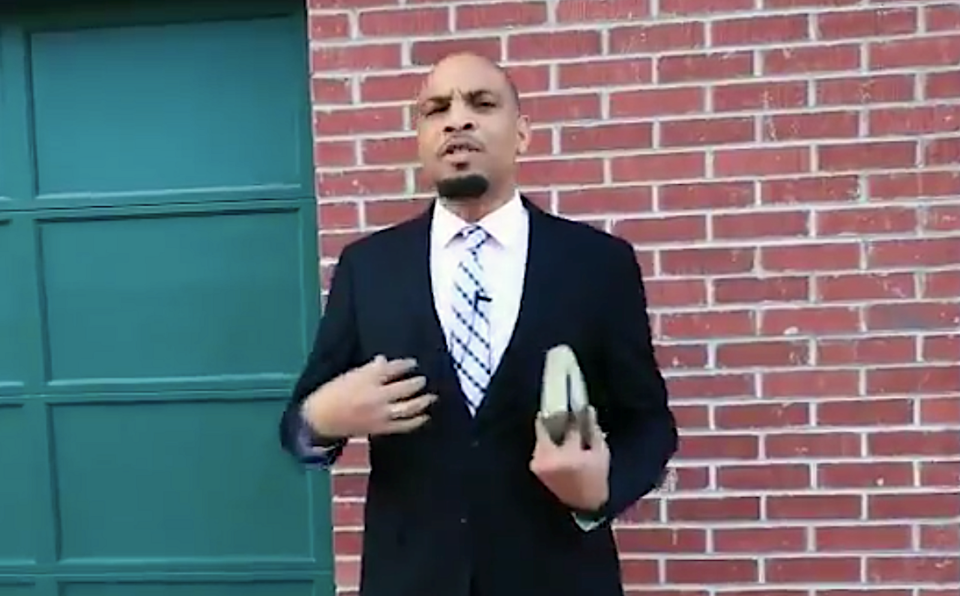 Dorre Love is a street preacher named in a report that went before the Vancouver Police Board. Photo Twitter/Ministry of the Word/Dorre Love

None of the calls Vancouver police answered last year in the West End and in other parts of the city regarding allegations of “street preachers” broadcasting hurtful messages targeting gay, transgender and other communities constituted hate speech.

That was the conclusion of an investigation police conducted into 10 incidents that occurred between June and October 2020. The incidents involved at least two men using a microphone and an amplifier — in separate events — to allegedly spread views of a homophobic and transphobic nature.

In one incident in August, sportscaster Justin Morrisette suffered a broken leg after he confronted Dorre Love, who has since been charged with aggravated assault. Love’s next court appearance is scheduled for March 10.

Police named Love and David Lynn as preachers in a report to the Vancouver Police Board in January. Both men were the subject of formal complaints lodged by citizens against the VPD who accused officers of not taking action against the men.

Following the assault on Morrisette in the West End, police assembled their hate crimes unit, major crimes section and a legal advisor to discuss the incidents.

“These experts concluded that none of the alleged actions by the street preachers constituted a violation of Criminal Code laws concerning hate speech or promoting hate,” said the report, which acknowledged the preachers’ views “caused offence and emotional stress to many citizens and specifically to the 2SLGBTQ+ community.”

The report said police intervened in seven of the 10 calls to “either curtail or stop behaviour by the street preachers that was unlawful or that had the potential to breach the peace, and where clear lawful authority existed.”

Police said two of the calls related to the arrest of Love for aggravated assault and an earlier incident for breach of the peace. Two other calls were determined to be “unfounded or action not lawfully warranted.”

One call referred to the “collective events” of Lynn, who used a microphone and amplifier at the Commercial-Broadway transit hub on Aug. 31 before later “baptizing” people at Sunset Beach under the watchful eye of several officers.

“VPD personnel formed a perimeter around Mr. Lynn and his group in an effort to keep the groups separate and allow the religious ceremony to proceed as is required under Section 2(b) of the Charter,” said the report, noting a crowd of demonstrators estimated at 300 people was at the beach.

“It must be remembered that the VPD has a responsibility to protect all involved in such situations, regardless of their personal views or feelings.”

West End resident Ron Kidd was one of the citizens who lodged a complaint against the VPD.

In an email Tuesday, he expressed his disappointment in the outcome of the VPD’s review of his complaint, noting Love had only been arrested once for breach of peace until the assault charge was laid.

“Therefore, in my opinion, there is no speech short of advocating violence that helpless identifiable minorities are ever protected from,” Kidd said. “Police presence is just a charade. The only thing the police do is prevent violence and protect property.”

He warned that allowing such speech from street preachers to continue is “a ticking time bomb.”

The report noted efforts by the Toronto Police Service to respond to Lynn in 2019 by way of bylaw enforcement and arrest for causing a disturbance resulted in a stay of criminal charges.

The report said there are no laws in Canada that police can — or should — exercise to prevent a person from expressing their constitutionally protected opinions or views.

That includes religious and any other opinions “even where such views are widely unpopular, distasteful, or even offensive in nature, as long as they do not incite hate or violent behaviour.”

The police investigation comes as city council prepares to vote Wednesday on setting a $250 fine and amending the noise control bylaw to prohibit the unauthorized use of a device that can amplify voice or musical instruments.

The city staff report also recommends giving the city and police the authority to seize such a device.

The report does not specifically mention Love or Lynn, or the nature of their broadcasts, but noted the city received “numerous complaints about an individual on the streets of downtown Vancouver [in July and August 2020] using a microphone and amplifier to speak to the public.”

Both the volume and duration of the man’s speech were reported to be a public disturbance, the report said.

Fry said the “bar is pretty high” to prove a hate crime under Canadian law, with preachers realizing how far they can go before their speech is considered a crime. Fry was among the crowd of demonstrators when Lynn was at Sunset Beach.

“I was there to register my discomfort with that guy’s message, but also recognizing there’s very little we can do about it within the context of the law, ” he said.