The federal government announced plans Monday to develop three projects in Vancouver that will create new affordable housing, helping those who are homeless and expanding the number of shelter spaces available in the city.
0
Feb 12, 2019 8:16 AM By: The Canadian Press

VANCOUVER — The federal government announced plans Monday to develop three projects in Vancouver that will create new affordable housing, helping those who are homeless and expanding the number of shelter spaces available in the city.

Prime Minister Justin Trudeau announced his government is providing funding to the Vancouver Affordable Housing Agency for a temporary modular housing initiative that is aimed at helping those without a home to transition into longer-term housing. 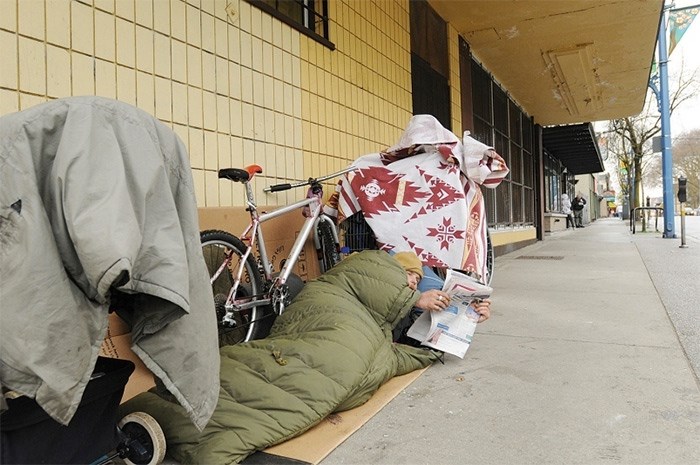 The city’s homeless count conducted over two days in March found there were 2,181 people living without a home. Photo Dan Toulgoet

Once completed, the project is expected to provide more than 600 pre-built units that can be relocated where they are needed across the city.

The funding will also help with the redevelopment of the Union Gospel Mission's Women and Families Centre in the Downtown Eastside. The centre is expanding to more than 60 units, which will provide shelter for women who are recovering from addiction.

Trudeau made the announcement at the site of the $40-million project that will provide 115 rental-housing units in the city later this year.

"By investing in affordable rental housing, temporary shelters for people who are living on the streets, and support centres for women battling addiction, we're not just investing in our communities — we're investing in people," he said.

The funding is part of the government's National Housing Strategy, a 10-year, $40-billion program announced in 2017 that Ottawa has billed as a plan to provide more social housing and affordable rental units.

The New Democrats said in a news release that Trudeau's government has neglected the housing crisis. One in five Canadians is paying more than 50 per cent of their income on housing and a growing number of people are one paycheque away from being homeless, the party said.

The prime minister and Lee mingled with patrons at a restaurant before chatting with commuters and posing for selfies outside the Metrotown SkyTrain station. Trudeau said Lee's experience as a provincial legislator representing Burnaby made him a strong candidate.

"We know that having someone grounded in the community, who's served Burnaby for more than 16 years as an elected politician already, is the kind of strong voice we need to represent Burnaby South in Ottawa," Trudeau said.

Asked how he felt the prime minister visiting the riding could sway the byelection, Singh said he hears on doorsteps that people are disappointed with the Trudeau government's approach to the housing crisis, pharmacare and the environment.

"On all these issues, this government and Mr. Trudeau have let people down," Singh said. "I'm confident that what we're talking about, what we're proposing, are solutions that will make their lives better."