‘This had to be planned': Two huge beer tanks stolen from Metro Vancouver brewery 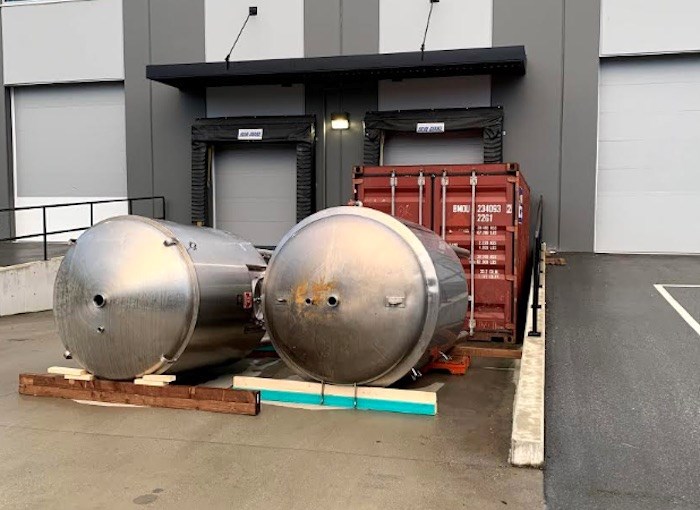 A new Port Coquitlam craft brewery is facing a major setback after someone stole two massive fermenter tanks from the back of the building while it was under construction.

Boardwalk Brewing was in the process of installing flooring and had left two fermenters behind the Seaborne Avenue building, according to Coquitlam RCMP.

“I have not heard of anything like this before,” said Coquitlam RCMP spokesperson Const. Deanna Law. “Somebody had to know they were back there and were casing the area. This had to be planned.”

The two tanks, estimated to weigh over a ton each and measuring roughly 16 feet tall by six feet wide, were last seen covered with blue tarps.

In an interview with CBC News, Boardwalk Brewing owner Phil Saxe said the tanks were worth $20,000 apiece and the plan was to start brewing by December.

"These are worth way more to us than they are in scrap," said Saxe in an email to Vancouver Is Awesome.

Const. Law said police suspect the tanks were stolen in the early hours of the morning between Oct. 16 and 19. But because of the industrial nature of the neighbourhood, it might not have appeared out of place to any witnesses.

The RCMP spokesperson said the theft would have required a flatbed truck with a crane to move just a single tank, and something bigger to take both at once.

"You would need a crane truck or forklift with extensions to move them correctly," added Saxe.

Investigators are now pulling video from traffic cameras in the area and canvassing the neighbourhood to collect any surveillance video that might have captured the theft.

But beyond that, there’s not much the public can do, said Const. Law.

“It’s not common,” she said, suggesting the public keep an eye out for any usual early morning activity in their neighbourhood, however far-fetched a thief’s target.

For Saxe, this is a terrible setback in what has already been a difficult year. "Obviously trying to get a new business open in 2020 has thrown a lot of unexpected challenges at us. We really didn't expect this to pile on top. We really need these tanks back to get up and running."