Mayor Kennedy Stewart hopes ‘hundreds’ of people can move off the street in a couple of months
Nov 10, 2020 3:15 PM By: Mike Howell 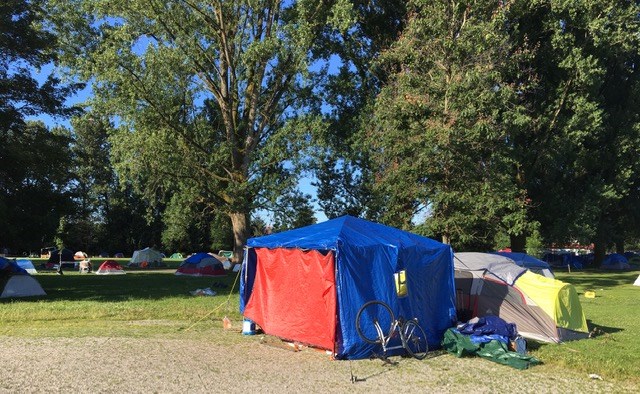 The Strathcona Park homeless encampment is the largest in the city, with estimates of more than 200 people living in tents. File photo Mike Howell
Mayor Kennedy Stewart says city staff are close to securing hotels, rental buildings and shelter space to provide accommodation for some of the estimated 750 people living on the street in Vancouver.

Stewart said Tuesday his hope is that “hundreds” of homeless people living in the Strathcona Park encampment and in other parts of the city could be moved into some form of shelter in the next couple of months, if not weeks.

“We are in the final stages of negotiations with a bunch of properties,” he told Glacier Media.

But how many of those “hundreds” get accommodation — and when and where they get it — depends on several factors, including spending $30 million in city money to finalize leases or purchases, or both, on the properties.

The city also needs to unlock $51.5 million promised by the federal government, which allows for the construction of modular housing, as well as the acquisition of land and the conversion of existing buildings to affordable housing.

Needs B.C. for the 'wraparound' funding

In addition, Stewart said there is more federal money available via a separate $500 million fund, which the city will soon apply for with local organizations and non-profits, with the aim of increasing Indigenous housing in Vancouver.

But the mayor warned the initial $51.5 million will only be made available if the provincial government agrees to fund operating costs of buildings, including “wraparound” services for tenants such as health care.

“If we don’t secure the wraparound services for this housing from the province by the end of November, the federal money goes away,” said Stewart, noting he spoke Tuesday to Ahmed Hussen, the federal minister responsible for housing, and deputy prime minister Chrystia Freeland about the requirements needed to secure the funding.

“If we don’t check that box, [the money] goes back into the main pool and it goes somewhere else in Canada. So that’s why we’re in crunch time, here.”

The mayor’s office issued a news release Tuesday calling on Premier John Horgan to appoint a “homelessness czar” to oversee and coordinate shelter provision and services for Vancouver’s most vulnerable.

Essentially, Stewart wants Horgan to appoint one minister who can sign off on the package of properties the city is negotiating to obtain with the combined $81.5 million. How much provincial money is required for operating funds with such a sign-off was unclear Tuesday.

“Really, [the provincial government] is the missing piece of the puzzle in terms of the rapid response to the homelessness situation we have here,” Stewart said. “We need somebody to talk to. I’ve talked to BC Housing but they need sign-offs from ministers in order to allocate funds.”

Glacier Media obtained a statement Tuesday from Horgan’s office, which didn’t address Stewart’s concern, but said homelessness is a focus of the B.C. government and “becomes even more significant as cold weather approaches.”

“The Premier made it clear yesterday that he’s in the process of selecting a cabinet,” the statement said. “Over the past three years, the province has invested $225 million in capital funding to address homelessness in Vancouver.”

The statement included a list of investments the province made in the last few months, including the purchase of the American, Howard Johnson and Buchan hotels in Vancouver to provide housing.

The province also provided funds early on in its first term to build and operate more than 600 units of modular housing in Vancouver, and this year committed to build another 450 supportive homes and open a “navigation centre” to help people transition from homelessness.

In the spring, Horgan appointed Shane Simpson, who was the minister responsible for social development and poverty reduction, to oversee the government’s mobilization of hundreds of homeless people in Vancouver and Victoria into housing.

That plan was done under the Emergency Program Act.

The mayor said Simpson, who has since retired from government, did an “incredible” job and wants a person in place who can take over that role. Stewart said he wasn’t suggesting the combined efforts of the ministries of housing, health and mental health and addictions to fight homelessness weren’t making progress on the homeless file.

“No, that’s not it all,” he said. “Instead of me talking with five ministers, what happened is I would talk with minister Simpson and he would coordinate all the responses of all the other ministries.”

From park to hotel: problematic?

Stewart wouldn’t reveal locations of properties the city is considering to house homeless people, partly because he didn’t want owners to drive up prices, knowing the city has millions of dollars to spend.

But he acknowledged residents’ concerns about the B.C. government’s move to relocate people from the Oppenheimer Park tent city into downtown hotels, particularly the Howard Johnson on Granville Street.

“We learned from the Howard Johnson that going directly from a park into a hotel room is a pretty big transition,” he said. “So we may need to move people into shelters first, especially the folks in groups so we can keep family units or friends together, and work out what housing works best for them.”

Downtown residents have told city council and park board commissioners in meetings over the summer and fall that street disorder and drug activity has increased, with many concerned about public safety in Yaletown and other neighbourhoods.

Council and park board have also heard similar complaints from Strathcona residents since the Strathcona Park encampment was set up earlier this year. It is the biggest encampment in the city, with estimates of more than 200 people living in the park.

Police have since stepped up patrols downtown and in Strathcona, and council recently approved a drug injection site to operate out of a city-owned building at 1101 Seymour St.

Meanwhile, drug overdose deaths in Vancouver have already surpassed last year’s total and city staff now believe 750 people are living on the street, with the pandemic fueling concerns about people’s health and safety.

In early October, city council directed staff to spend up to $30 million to assist in buying and leasing hotels and other buildings to serve as temporary — and possibly permanent — housing for people living on the streets.

Council also ordered staff to use the 65-unit city-owned 2400 Motel on Kingsway and the Jericho Hostel at Jericho Beach to house homeless people, and to activate “temporary pandemic shelters.”