New site will operate out of city building at Seymour and Helmcken streets
Oct 20, 2020 6:30 PM By: Mike Howell 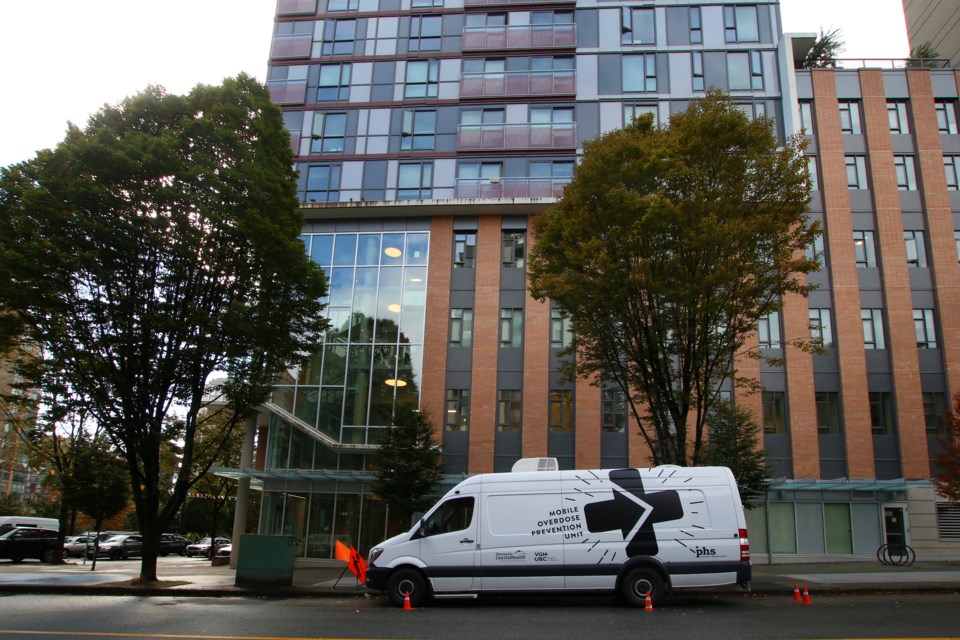 Vancouver city council approved Tuesday a drug injection site on the first floor of a city-owned building on Seymour Street, where a van has served as a mobile injection site since May. Photo Rob Kruyt

Vancouver city council has approved a supervised drug injection site downtown and further directed staff to work with health providers and police to find other locations for sites across the city where data shows the greatest risk of overdoses.

Council’s decision Tuesday allows Vancouver Coastal Health to set up an injection site on the first floor of a city-owned building at 1101 Seymour St., which will replace a site operating out of a parking lot at St. Paul’s Hospital and reduce the need for a mobile injection van on the street.

“This is a crisis and we can’t afford to delay because people’s lives are at stake,” said OneCity Coun. Christine Boyle, noting the hundreds of people who continue to die in Vancouver from toxic drugs. “I’m glad to see the conversation moving forward and looking at other neighbourhoods, as well.”

The vote was not without controversy, with NPA Coun. Sarah Kirby-Yung concerned about opening the site in a neighbourhood in which residents made it clear to council they were already overwhelmed by street disorder and drug activity.

The fact it will be located near the family-popular Emery Barnes Park and across the street from a proposed daycare were also points made by Kirby-Yung, who tried unsuccessfully to defer a decision until the city could find a location away from such spaces.

In the end, Kirby-Yung and her three fellow NPA councillors — Melissa De Genova, Colleen Hardwick and Lisa Dominato — voted against staff’s recommendation to allow the injection site on Seymour Street.

“The fact that [overdoses] are happening across the city [is why] I believe we should be focusing on a more distributed approach,” said Hardwick, noting data from firefighters and police show overdose calls and deaths spread across Vancouver, but predominantly in the Downtown Eastside.

“If I had the money, I would spend that on more mobile units distributed around the city — informed by the maps we’ve seen of where those overdose deaths have occurred. Location matters.”

Residents who spoke to council last week said the deterioration of their neighbourhood began after homeless people from the Oppenheimer Park tent city were moved in April and May into downtown hotels, particularly the Howard Johnson on Granville Street strip.

At the same time, other residents and harm reduction advocates urged council to allow the site on Seymour and Helmcken streets to give drug users a safe and supervised place to inject drugs and connect them to health services.

Councillors Pete Fry and Jean Swanson seized on the contrast in views in their closing remarks, with both of them predicting the site will help save lives and reduce some of the concerns raised by residents regarding street disorder.

“We know we’re in an epidemic of toxic drug supply that’s been causing an unprecedented number of deaths in our city, and we know that this proposed overdose prevention site will save lives,” Fry said.

“What we’re not really talking about, and we need to talk about more, is that this site can improve lives, not just for people who use drugs, but for everyone — for all the nearby businesses, residents, folks living in the New Continental, for folks living in the Brava, for families at Emery Barnes Park, for folks over at the Scotia Dance Centre or the Gathering Place.”

On Saturday, Swanson visited the neighbourhood of the proposed site, which is on the edge of Yaletown. She described the area in more idyllic terms than what council heard from frustrated and angry residents, who told stories of discarded syringes, people relieving themselves in the streets and widespread drug activity.

“I went up there with trepidation, fearing that I would be encountering people chasing me down the alley and garbage all over the place,” Swanson said.

“I encountered a nice park full of more strollers than I’ve ever seen in my life and a bunch of happy families and children playing. I didn’t see any garbage, even in the alleys.”

Added Swanson: “When this site opens, the people in the neighbourhood will see that it’s helping and they’ll hopefully calm down a little bit.”

Non-profit agency RainCity Housing will operate the 580 sq.foot site, but Vancouver Coastal Health was unable to say Tuesday what the capacity of the space will be until a safety plan is put in place that respects COVID-19 physical distancing measures.

While the issue before council was the approval of a lease, much of the debate veered into the wider discussion of the city’s decades-old drug policy and the need to accelerate drug users’ access to a “safe supply” of prescription medication.

Drug injection sites are not new to Vancouver, with the Dr. Peter Centre opening a small injection in room in 2002 and Insite on East Hastings opening in 2003. Since then, more federal-government approved sites have opened, along with “overdose prevention sites” allowed by the B.C. government after a public health emergency was declared in 2016.

Council’s vote came the same day the BC Coroners Service released an update on the number of overdose deaths that occurred in the province.

The preliminary data showed that 1,202 people died in B.C. between January and September, with 291 in Vancouver. The nine-month total of deaths for Vancouver has already surpassed last year’s 12-month total of 247 deaths.

The coroners’ report noted that no deaths in B.C. were reported at supervised consumption or drug prevention sites. Most of the deaths — 84 per cent — occurred inside, with 56 per cent in private residences and 28 per cent in “other residences,” including social and supportive housing, single-room-occupancy hotels and shelters.

The category “other residences” is where 48 per cent of the deaths were reported in the Vancouver Coastal Health region, which includes Vancouver, Richmond, the North Shore and Sunshine Coast.

The data showed the proportion of deaths connected to fentanyl — alone, or in combination with other drugs — was approximately 80 per cent this year, a five per cent drop from 2019. That percentage, however, could change because results of further toxicology tests haven’t been finalized.

Insp. Bill Spearn of the Vancouver Police Department told council Oct. 12 that police data showed the most overdose deaths in the city this year occurred in the Downtown Eastside, followed by the southeast quadrant.

“When it comes to services, we’d like to see these services where the deaths are occurring,” Spearn said. “We can’t help people when they’re deceased, and there are still some spots in the city that have much greater deaths than the area being proposed right now [for an injection site].”

Spearn said that without a “safe supply” of prescription drugs for illicit drug-dependent users, he predicted an increase in drug dealing in the area outside the Seymour Street injection site, and that it will require more police response.

In responding to a question Tuesday from Coun. Melissa De Genova about the location of the site on Seymour Street, Spearn replied: “What we’re hearing from the community is they don’t want this next to the park. Would we be happy with it a couple blocks away? Yeah, for sure. Would we want it next to the park? No, just because what we’re hearing from the community…and what we’re seeing in the park.”

The site will likely open in November.