Recently he drew over 70 pedestrians waiting to cross an intersection at Granville and Davie streets
Feb 24, 2021 2:42 PM By: Cameron Thomson 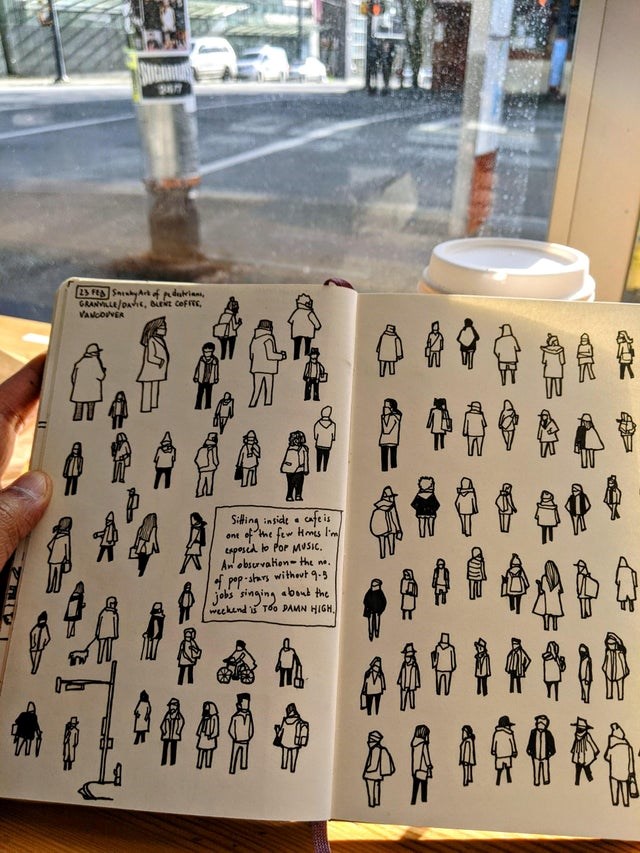 Nishant Jain is using his style of SneakyArt to explore Vancouver and peer into the lives of people living in the city.Nishant Jain

Without you ever knowing, your likeness could be living inside the sketchbook of Vancouver’s new ‘sneaky artist.’

Nishant Jain recently moved with his wife to Vancouver from Chicago and is exploring the city through drawing it and its people. Jain is a self-described ‘sneaky artist’ which, as the name suggests, is the practice of drawing without bringing any attention to yourself. In fact, Jain hosts an entire podcast dedicated to this art form called The Sneaky Art Podcast. It is the covert nature of this art style that allows him to capture candid drawings of Vancouverites from all over the city.

His most recent work features a collection of 73 drawings of pedestrians waiting at a crosswalk at the intersection of Granville and Davie streets he drew on Feb. 23. Jain used a nearby Blenz Coffee shop as a vantage point.

“Sitting inside a cafe is one of the few times I'm exposed to pop music. An observation – the number of pop-stars without 9-5 jobs singing about the weekend is TOO DAMN HIGH,” Jain wrote in a blurb among the sketches.

Jain regularly posts his drawings to his Instagram account @thesneakyartist where scenes can range anywhere from couples sitting together on transit, people getting haircuts or feeding birds at a park. Aside from capturing little moments of Vancouverite’s lives, Jain has also drawn elements of the city’s structures like buildings along Granville Street and West Hastings as well as moored boats at False Creek.

“I love urban spaces and the way people interact with their urban environment, whether it's in a cafe or on public transit. Observing human activity gives me a better sense for my surroundings, which lets me be more comfortable in a new place," Jain wrote in a recent email to Vancouver Is Awesome. "Dense cities with diverse populations are especially interesting to me because you never know what beauty you will find around the corner. In a place like Vancouver, I'm always looking to be surprised.”

With the exception of musicians, the people Jain has drawn will never know that a sketch of them resides between the pages of his sketchbook.

“The cardinal rule of SneakyArt is that I do not disturb my subjects in any way," he said. "I typically draw people who are busy in what they are doing, and never interrupt them. So my subjects do not find out that they have been drawn, either before or after.”

After so many drawings, Jain has begun to notice things about people and how they interact with others and the spaces they are inhabiting when he draws them.

"There is beauty in all sorts of things people do - the way they tap their feet waiting for their coffee in the morning, the way they occupy themselves on a bus, or the way they look up at a piece of art in a museum. My key realization is that there is extraordinary beauty in ordinary places on ordinary days, all it needs is a patient and careful observer. By playing that role and sharing my art, I hope to help others appreciate their world a little more.”

Trained as an engineer, Jain was halfway through a PhD in biomechanics before deciding to quit academia and pursue writing stories and drawing. According to his website, the shift happened in Chicago in 2014. While he was conducting experiments at Northwestern University by day, Jain was influenced by the city’s creative community at open-mic comedy clubs, jazz bars, and small independent art galleries.

Jain taught himself to draw by observing people and places in the windy city. He sat at cafes-tables, bar-stools, and street-corners, drawing whatever caught his fancy. This practice evolved to become SneakyArt.

Jain went on to literally write the book on SneakyArt when in 2019, he independently published a book comprising drawings he made while living in the town of Eau Claire, Wisconsin. SneakyArt of Eau Claire has sold hundreds of copies, reaching homes in over 30 states and 7 other countries around the world. In 2020, the book won two independent publishing awards (IPPY and MIPA).